The inner courtyard of the town hall in Poperinge, Belgium is a poignant destination. There you will find a series of small cells and an authentic execution pole.

The tragic truth is, many so-called ‘deserters’ during WW1 were executed here. Young men, some still in their teen years spent the last night of their lives in these cells.

The following day, they would be led to their execution in the courtyard. The simple crime was refusing to go back to the front.

Ironically, many English soldiers nicknamed Poperinge ‘Good old Pops’. It was a place in Belgium where they were able to get some respite from the horrors of the front line.

However, these same troops would often arrive in Poperinge suffering from shell shock. They were frightened boys, who may have just been bombarded by enemy fire for days.

It is no wonder they did not know what they were doing and felt unable to return back to active duty.

Those that protested and refused to return should have received compassion. Instead, they were made an example of.

British, French, and Canadian soldiers that were too traumatized to continue fighting were sentenced to death by execution.

The location for this was the inner courtyard of Poperinge town hall. Many unfortunate souls suffered their fate there.

Where are the Poperinge Death Cells?

Arriving at the town hall you will follow signs through an archway into the inner courtyard.

A replica execution pole has been placed at the back in the exact spot the soldiers were executed for desertion.

It is worth spending a minute to take it all in. It is easy to imagine the sound of the gunshot echoing around the courtyard at dawn.

These poor men, killed by their own side.

Information panels and an audiotape recording describe the scene as it would have happened over 100 years ago.

A red door will take you to the holding cells where the soldiers awaited their punishment.

There were originally four cells, but only two are currently open to the public. These have been restored to the condition they would have been in WW1.

They are extremely cramped and can be difficult to access (the door is only 78 cm wide). 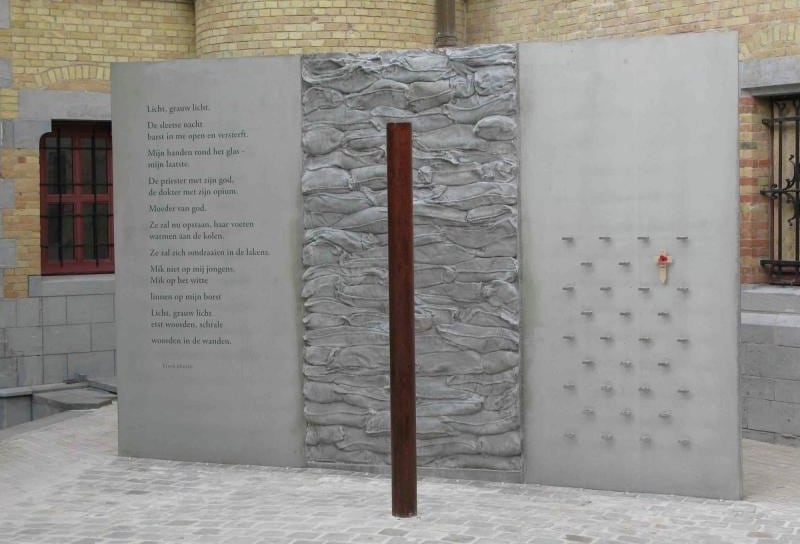 Information within the cells explains the injustices that took place. There is also an audio recounting of the 1917 execution of 17-year-old soldier Herbert Morris.

Most harrowing of all is the graffiti that has been etched into the cold stone walls. Each comes from the hands of the young soldiers that were incarcerated.

A lot has faded over the years, however, you can still see a small pencil-sketch of a battleship, and the final words from a member of the 3rd Canadian Tunnelling Company.

The emblem of the 49th Canadian Infantry Battalion is also visible, as are some circular doodles of a soldier that must have been passing the time.

Perspex covers them for prosperity so that irresponsible tourists cannot make their own additions.

One has to wonder what was going through the minds of these broken men as they faced death the following day.