If you are in Jerusalem and are looking for an insight into how the British treated Arab and Jewish prisoners during the occupation of Palestine in the first half of the 20th Century, the Museum of Underground Prisoners is definitely worth a visit.

With the inmates’ living conditions faithfully re-created, including slop buckets in the solitary confinement cells, original items in the prison workshop and most hard-hitting of all, a single rope noose hanging in the center of the execution room; this is a dark tourism destination of note.

History of the Museum of Underground Prisoners 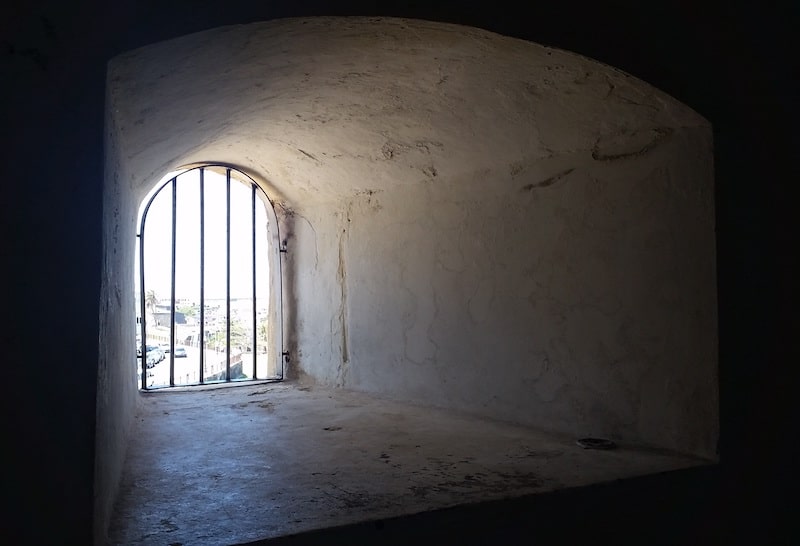 After the British conquered Palestine from the Ottoman Turks in 1917, a compound designed for visiting Russian Christian pilgrims to Juresleam became the city’s central prison and security complex.

Known as “Bevingrad“, (after British Statesman Ernest Bevin who was in the Foreign Office at the time) the complex saw the incarceration of hundreds of Jews and Arabs during nearly 30 years of occupation.

The Empire’s presence in Palestine was under regular attack from the three main Zionist paramilitary organizations: the Haganah, Irgun, and Lehi.

The conflict was generally ugly (as is the way with guerrilla warfare). Bombs, raids, and assassinations were the MO as the aforementioned groups did what they could to drive the British out of the area, and establish the state of Israel for the Jewish people.

The British were always quick to make an example of those that were caught, however. Upon arrest, they would end in the sparse cells of what is now the Museum of Underground Prisoners.

Execution for resistance crimes was common.

After the British Occupation

Following British withdrawal during the Palestine war in 1948, the compound was used for various purposes including as storehouses of the Jewish Agency.

During the 1960s the Israeli government officially purchased most of the land and its buildings from the Russian government. It was then transferred to the Military of Defense, which eventually restored the prison section and turned it into the museum.

Where is the Museum of Underground Prisoners

Inside the Museum of Underground Prisoners

Tours are available inside the prison, with the story of Moshe Barazani and Meir Feinstein being particularly interesting.

As members of the Lehi and Irgun groups respectively, the activists were charged with conspiracy to murder in 1947. They were arrested while planting a bomb at a Jerusalem railway station and were both subsequently given the death sentence.

However, just a few hours before their execution the two men were able to blow themselves up, using grenades that had been smuggled inside a box of oranges.

Their suicide note addressed their underground comrades and stated that they would “march to death proudly,”. It is now on display at the museum.

There’s a wide range of things to see inside the Museum of Underground Prisoners. Highlights include, the Escape Room was in 1948, 12 prisoners managed to flee their cell by digging into the sewer system under the floor.

You can also check out the Prison yards that were used for daily exercise, the workshop areas where prisoners were made to build caskets and tombstones for the British police, army and security services that had been killed during the conflict.

The Warden and secretariat office are also faithfully recreated, and of course, a must-see is the execution room and gallows.