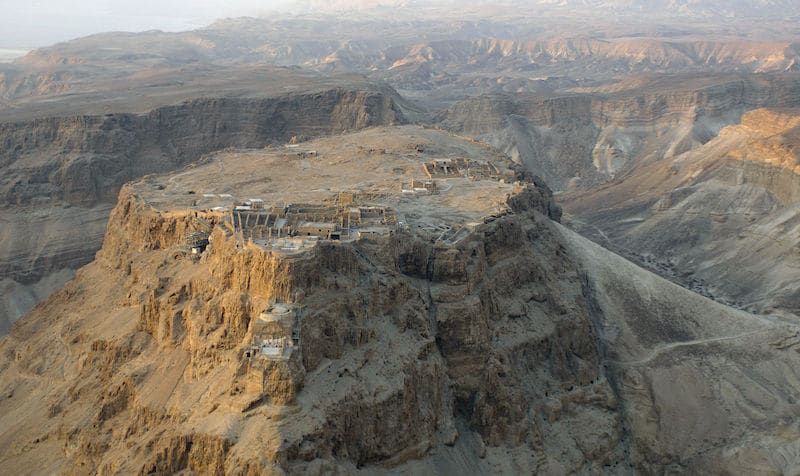 “Masada shall not fall again.” The oath that soldiers take when inducted into the Israeli Defence Forces ends with this line. It is connected to a siege that took place almost 2000 years ago.

The 1st-century fortress at Masada was the location of one of the deadliest mass suicides in the history of the middle east. It was also the most dramatic revolt of the Jewish-Roman wars.

At the turn of the first millennia, a group of Jews stormed the Roman garrison at Masada and managed to take control. Defending the fortress against the Romans, they ended up living there with their families for 3 years.

However, in the year 73, the Romans retaliated with the means to succeed. Knowing they didn’t stand a chance against the mighty force, the Jews drew lots to decide the order of their own self-sacrifice.

They determined who would kill who until the last ones standing had no choice but to kill themselves.

When the Romans finally entered the fortress they were met with the site of over 1,000 dead, men, women, and children.

Today, Masada has been restored to a similar condition it would have been 2000 years ago. It is a hugely popular (dark) tourist destination in Israel.

History of the Masada, Israel 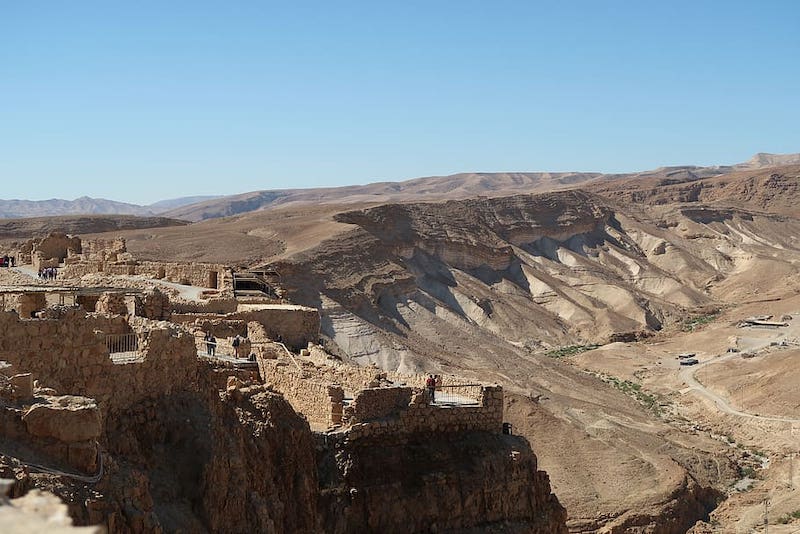 Built in the Roman style by Herod, the king of Judea, the imposing fortress sits 1,500 feet above the Dead Sea on one side, with the Judean desert stretching out from the other.

In essence, nature provided the most efficient fortifications. Masada was once extremely difficult to get to, making it very easy to defend.

The purpose of the fortress was to be the king’s refuge. A private palace was constructed within the safety of its confines.

There were also administrative centers for the court, storehouses to ensure enough supplies during any potential siege, and a well-equipped armory.

After Herod’s death, the fortress became less important. Almost an empty residence, it was not very well guarded. The Jews were able to take control with ease.

Jewish Zealots fleeing from trouble in Jerusalem were involved too. For the next 3 years, they lived there trouble-free. Masada was not a priority to the Romans.

Little is known why the Roman army suddenly took a vested interest. Maybe the Romans had just been biding their time. When they attacked, they did with considerable force.

The Romans built a ramp around the walls and used battering rams until a hole was created.

With no means of escape, the Jews decided to kill each other rather than be captured. The Siege of Masada was one of the final events in the first Jewish-Roman war. 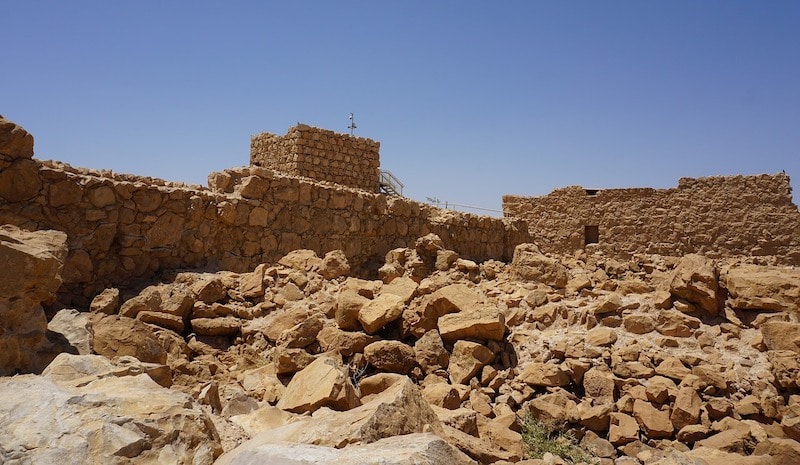 After the fall of the Roman empire, the fortress was briefly used by Byzantine monks. After this, the magnificent edifice remained untouched for more than 13 centuries.

Nature took over and all signs of human habitation disappeared.

It wasn’t until the 1800s that humanity began to rediscover the secrets of Masada. Excavations took place, and the history of the siege gained more widespread attention.

So much so, the site is now a poignant symbol of the Jewish plight against oppression, with the words “Masada shall not fall again,” being a mantra for all those that serve to protect the Jewish state of Israel. 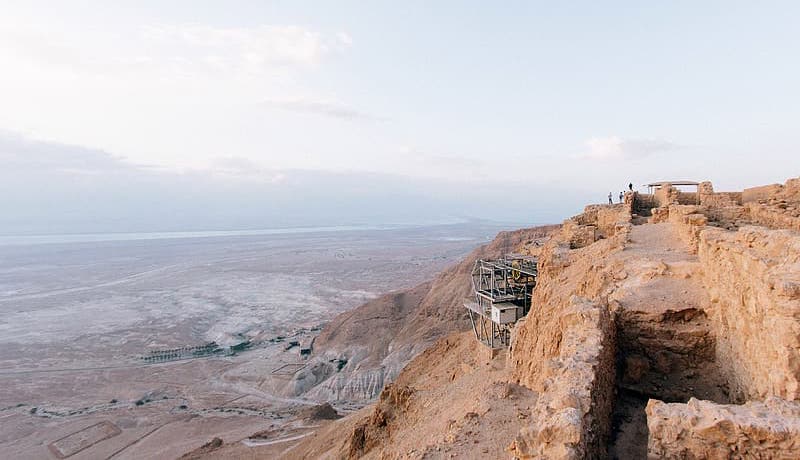 Visiting Masada today is a treat. The site has been very carefully restored in recent years. This includes Herod’s private palace, which is built on three overhanging rock terraces with magnificent views of the gorge below.

This area also has bathhouses with preserved Roman mosaics and murals, as well as a synagogue.

For history lovers, there are also the remains of Roman siege camps located outside the fortress.

Other areas of the site include the mikveh (a Jewish ritual bath), original storerooms, and watchtowers.

As you walk around Masada, various artifacts that have been excavated in recent years are on display. They help bring history to life and include decorated pottery, Roman scrolls, and coins.

In some areas of the ruins, beautiful embossments and murals were discovered. These have since been restored by Italian experts in order to maintain their authenticity. 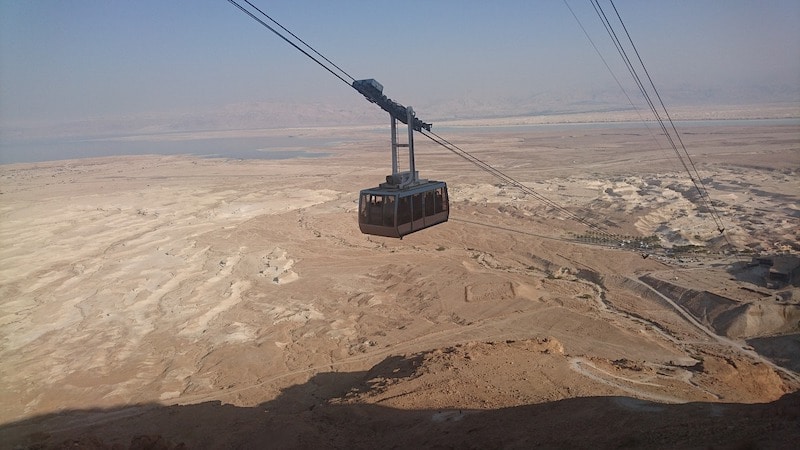 There are a few ways to reach the top of Masada. One of the most enjoyable is the cable car that takes you from the tourist center at the bottom of the mountain, right to the base of the site.

The “Snake Path” is a more ambitious method of ascent, and timing your hike to watch the sunrise over the Dead-Sea is highly recommended.

Another way for seasoned hikers only is to climb the mountain on the ancient “Runners” path. From here you can visit Masada, then walk down again via Elazar Mountain.

This will take an entire day, however along the route you will come across the ruins of several Roman siege camps. You’ll also get some of the best available views of Masada.

However, none of the hikes should really be attempted in peak summer when the Israeli sunshine is at its hottest. 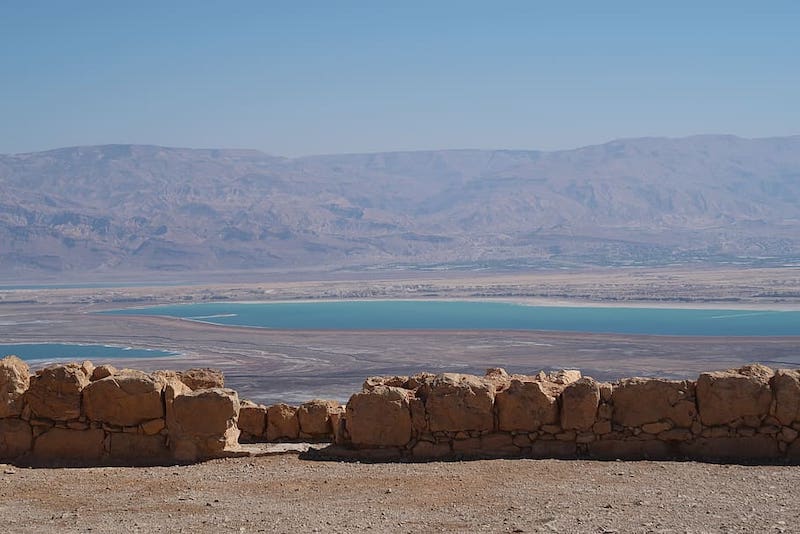 The Fortress museum is open during the following times:

On Fridays and the days before public holidays, the site closes one hour earlier than listed above.

The cable car operates during the following times: