Sanctuary Wood Museum is a popular destination in the Salient for dark tourist battlefield visitors. Located 2 miles from Ypres, it is arguably one of the best-preserved trenches from WW1.

We have a farmer named Schier to thank for this. When the Great War ended in November 1918, farmers returned to their lands in northern Belgium and France to find them decimated by the conflict.

Four years of trench warfare had transformed the landscape. In an attempt to move on from the constant reminder of death and destruction, these areas were covered in grass, hedgerows, and forest.

All except a small patch at Sanctuary Wood. When Schier returned to his land overlooking Ypres, he cleared the trench network of debris and simply left it as it was.

Now, over 100 years later, walking through Sanctuary Wood makes it possible to imagine what it must have been like in the mud and misery of the Salient during WW1. 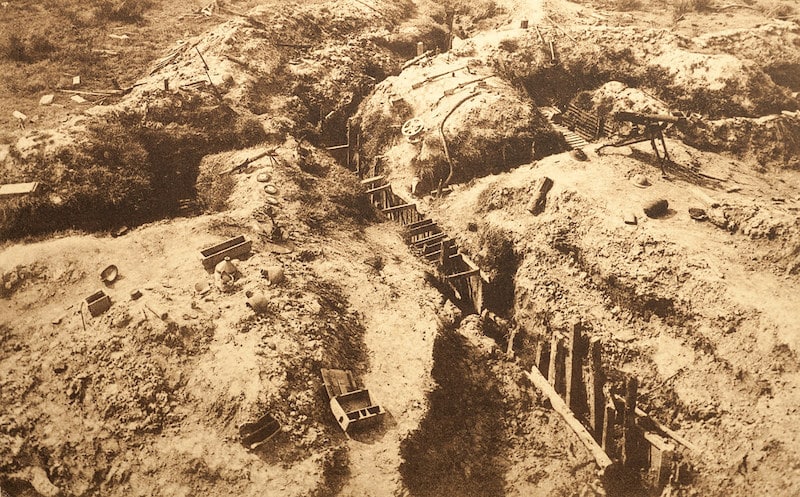 Sanctuary Wood was an important position on the British front line. Its elevated position granted excellent views of the enemy approach.

Its defense was imperative and because of this, the area witnessed some of the bloodiest battles of the war.

The site was called “Hill 62” on military maps (due to its elevation) but became known as sanctuary wood by soldiers early in the war because it offered some protection.

The heavy woodland provided cover from the German attack and the aforementioned views gave time to prepare.

This changed within months, however. The constant bombardment by German artillery obliterated the woodland, leaving behind the nightmarish, muddy landscape we now associate with trench warfare.

Where is The Sanctuary Wood Museum?

There are two parts to the Sanctuary Wood Museum. There’s the preserved farmhouse that contains a large number of artifacts from the Great War, there’s also the trench network itself, open for visitors to walk around.

The exhibits in the museum are extremely interesting. Weapons, personal effects, and photographs are all on display.

Some were originally picked up by Mr. Schier when clearing the trenches upon his return, these include both Germain and allied rifles still encrusted with mud, and steel helmets complete with bullet holes. Other items have been donated to the museum over the years.

Of particular interest to me was the rare collection of stereoviews. My father collects these and I have always been fascinated by the historical 3D images you can witness when you look at them through a viewer.

(For the uninitiated, stereoviews work by viewing two separate photographs of a scene through two eyepiece lenses. There is a slight difference in perspective on each image, much the way our eyes perceive reality from a different position on each side of the nose. This gives rise to a three-dimensional image within the viewfinder.)

To see images of WW1 battlefields in the midst of bloody conflict is startling. The artillery, dead bodies, mud, and misery are harrowing to witness in 3D. It is quite the experience; these are images difficult to rid the mind of.

To take stock on what you have seen after walking around the museum there is a small bar, café, and gift shop.

The trenches are just a short walk from the museum and even this is arranged to evoke a feeling of dread.

Rolls of barbed wire line the path to the trench and a stockpile of German artillery shells are haphazardly strewn around.

A wooden signpost indicates the way to the “British Front Line”, and it is impossible not to think about the countless soldiers that lost their lives here.

The system at Sanctuary Wood is a preserved section of the British trench lines, and are actually quite extensive.

Some sections even run underground or beneath corrugated roofs. Climbing down into the darkness you get an insight into just how claustrophobic it must have been. It is a tiny glimpse into the horror of the Western Front.

Close to the Sanctuary Wood Museum is the Canadian Hill 62 Memorial. When in the area it should be visited too.

The memorial commemorates the actions of the Canadian Corps between April and August 1916. They were integral in defending the southern stretches of the Ypres Salient and Hill 62 witnessed a lot of action towards those efforts.

The battles also mark the first occasion in which Canadian divisions engaged in planned offensive operations during World War I.

As the British Official History of the War recorded:

“The first Canadian deliberately planned attack in any force had resulted in an unqualified success.”

Possession of vital high-ground positions was reclaimed by the allied forces and more importantly, the Germans were prevented strategic commanding views of Ypres.

Details of the offensive

On 2nd June 1916, the Germans launched an attack on the three hills south of Hooge where the Canadians had taken up a defensive position.

It was a comprehensive assault, the enemy soldiers using mines and flame-throwers as they tore towards the allies.

No man’s land was a precarious place along this section of the front. Measuring less than 150 meters wide in places, the area around Mount Sorrel (and Hill 61 and 62) was the only place the British trench line actually overlooked the Germans.

The enemy attack at this stage proved successful, however. The Canadian 3rd Division was forced to retire and a counter-attack by the 1st Division a few days later did little to stop the advancing Germans.

So much so, by the 6th June, the enemy had seized Hooge and nearby Mount Sorrel.

At this stage, the Canadians were outmanned and their position looked desperate.

Lieutenant-General Sir Julian Byng was only 8 days into his post, and in that short time had lost his Commander of the 3rd Division (Major General Mercer) and had seen the 8th Brigade captured (led by Brigadier General Williams).

Not only that, but the retirement of the Canadians during the German offensive had dented both their pride and morale.

All was not lost however, Lieutenant General Byng set to work on a new offensive plan. He would allow the Germans to have Hooge and instead concentrate on reclaiming the hills at Mount Sorrel and Hill 62.

Fortunately, supply lines to the allied front in the area were good. Byng had no shortage of artillery at his disposal and by the 12th of June, all hell was unleashed on the German positions.

The heroism of the 1st Canadian Division under Major General Arthur Currie cannot be understated here.

After the initial bombardment, the Canadians launched a brave counter-attack at 0130 hours on the 13th of June.

Torrential rain accompanied their arrival into the German trenches as they pushed the enemy back behind their lines.

Mount Sorrell and Hills 61 & 62 were now back in allied control. The positions regained by the Canadians remained that way for a further 2 years of the War.

It wasn’t until the massive German spring offensive in 1918 that they were reclaimed. However, by that time the end was only a few months away.

The memorial park features three beautiful terraced gardens that lead up to the summit. Here you will find a grey granite block monument.

It sits in a grassed circle on a low flagstone terrace and with the commanding views at the top of the hillside, you can immediately comprehend the strategic significance of the spot.

The Canadian Corps’ accomplishment in wresting and defending this area from the German Army cannot be understated. True heroes every single one of them.