Bunker Valentin was the largest fortified U-boat facility in Germany during WWII.

Built to produce submarines on a grand scale for the Nazi war effort, more than 10,000 forced laborers were used in the construction of this gigantic bunker, support yard, and assembly area.

However, the efforts came late in the war for Hitler. The Third Reich was defeated before the mega-project could be completed.

After years of post-war use as a military storage facility, the bunker complex came into the ownership of the Denkort Bunker Valentin in 2011.

It is now a massive memorial structure open to the public. For any dark tourist in the area, it is definitely a must-see.

History of the bunker – Construction

Construction of Bunker Valentin began in the summer of 1943. The area outside of Bremen was mainly rural, providing the space the Nazis needed for such a large-scale construction project.

The more remote location was also an attempt to avoid the heavy allied aerial bombing that was taking place in the larger cities and industrial centers within Germany at that time.

The U-Boat shipyard and protective bunker were positioned downriver from Bremen but with easy access to the North Sea via the River Weser.

Construction was overseen by the Nazis’ “Organisation Todt”, and as was the norm for such huge projects, the workforce was made up of POWs and concentration camp inmates.

Conditions were horrific of course and it is estimated that between 1500 and 6000 workers died during the process of building Bunker Valentin.

The prison camp set up near the site became the largest subcamp of the Neuengamme concentration camp in Hamburg, with laborers held captive from all over Nazi-occupied Europe. 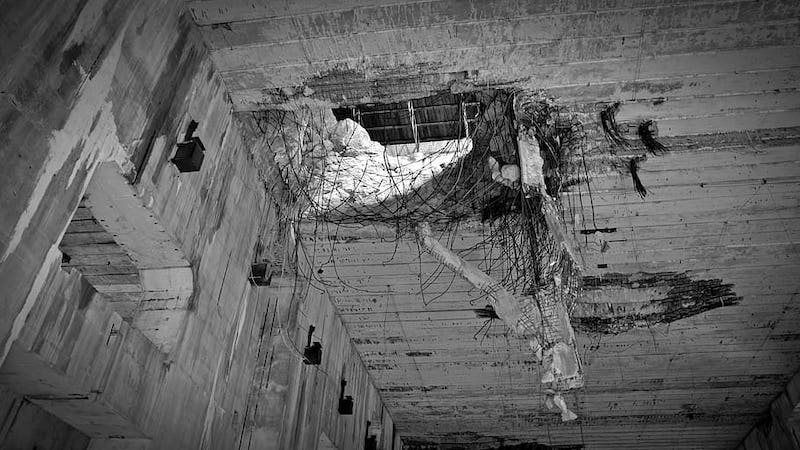 The Lancasters bombs caused significant damage to the bunker, blowing large holes in the roof that caused an estimated 1,000 tons of debris to fall into the chamber below.

Other bombs dropped that day caused damage to a nearby electricity plant, as well as local workshops and a concrete mixing plant necessary for construction.

Before the Nazis could even begin to assess the damage another allied attack took place just 3 days later.

On 30 March 1945, the US Eighth Air Force attacked Valentin with Disney bombs.

These rocket-assisted weapons were designed to penetrate further. A total of 60 were launched, with considerable damage done to important supporting installations that surrounded the bunker.

Not a single submarine keel was ever laid during the life of the Valentin factory and bunker. Hitler was soon dead and the war was over.

After the war, the Ministry of Defense of the new Federal Republic of Germany took control of the bunker and began using it as a storage depot for the navy.

By 1960, the still-intact eastern part of the bunker had been renovated for purpose. The Cold War was now very much underway, with the entire complex becoming a closed-off military zone.

Known as the Navy Material Depot, Subunit Wilhelmshaven, the restricted site was closed off to the public for over 3 decades.

During this time the navy constructed a partition wall between the ruined western and eastern sections of the bunker.

The former assembly hall was split into two as result, with the western side too damaged to use in any meaningful way.

Finally, in the 1990s (after the fall of the Iron Curtain and the reunification of Germany), the navy started to allow survivors and relatives of the camps inside the complex.

Where is Bunker Valentin?

The best way to reach the bunker is via car or taxi. There is limited parking, however. Bus line 90 from the train stations Bremen-Farge or Bremen-Vegesack will also take you to the site.

After Denkort Bunker Valentin took control of the site, they immediately began to transform it into a museum and open memorial in remembrance to those that died during its construction.

With it being such a large facility (with some parts understandably extremely costly to make safe), the concept is still a work in progress.

Some parts are open to the public, however. Accessible free of charge, a path runs through the site where you will be able to see the exhibits that have been set up within the bunker and surrounding buildings.

Walking tour of the bunker

As you first take the path through the grounds of Bunker Valentin you will find information panels with details of the bunker and its history, written in both German and English.

Once inside, you will begin to appreciate the sheer scale of the engineering effort. The building is enormous.

The entrance atrium contains a reception desk where you can borrow audio-guides. There are also some images projected on to the wall with more information about the bunker.

From here you can walk into the main exhibition area where you will find original objects from the time of the construction. There are also artifacts recovered from the forced labor camp that was established nearby.

One poignant little piece is the engraved tin cigarette case made by an Italian prisoner. He exchanged it for some bread from a German apprentice, who later donated to the exhibition.

Further on within the exhibition area is a section dedicated to submarines. “Das Boot” gets a mention and there are various model kits of german U-Boats on display.

The post-war life of the bunker is also described, with details of its time as military storage facility for the Navy, as well as the long campaign for turning it into a memorial.

Other notable aspects as you take a tour are the damaged parts of the bunker that although off-limits, can be seen from various vantage points as you walk around.

At one point you will reach a viewing platform where you can see the partly ruined western section of the bunker; the holes made by the RAF bombers can still be seen.

Towards the end of the bunker section of the walk, you will come across some wartime artifacts such as a bent bomb casing that the Allies used for target practice after taking control of the area in the spring of 1945.

There is also the chassis of a tipper wagon that would have been used during the construction of Bunker Valentin.

Past this, the path leads you outside once more. Here you arrive at the rear sluice chamber, where the U-boats would have been launched after completion.

This is full of dirty, stagnant water and apart from the scale of it all, it is hard to imagine that hi-tech war machines were intended to begin active duty from here.

Continuing on you will reach the ruins of the heavily bombed concrete mixing plant. Some information panels illustrate what went on within the surrounding infrastructure and how it assisted the construction of the bunker.

The final part of the tour takes you along the outside of the western and southern sides of the bunker, back to the main entrance. This really helps put the scale of the building into perspective as it is not a short walk.

Look out for the large opening on one side as you go. This is where large, prefabricated parts of the U-Boats would have arrived and entered the bunker for assembly.