Leuk may be a small town but it has a long history. Situated in Switzerland’s Rhone Valley, (not far from a bunch of popular Rhone-Alpes thermal spas), the Romans liked to hang out here.

In fact, the first church in Leuk dates back to the 6th century and used stone from an existing Roman building.

Where that church once stood, there is now the gothic St Stephan’s. This has been welcoming churchgoers since the 15th Century.

However, that very church managed to hold a rather macabre secret for several hundred years.

Renovation works in 1981 had builders knocking through walls to create a basement community center. They got the shock of their lives.

In a hidden cellar that the church had no record of, was a 65-foot long ossuary. The walls were lined with thousands of human skulls.

Naturally, the discovery put a halt to the renovation plans and an archaeological excavation began.

It turned out St Stephan’s had yet more secrets to reveal. Twenty-six statues had been hidden amongst the bones. Dated between the 13th and the 16th centuries, the statues were a similar age to the current incarnation of the church.

Artworks were also found. Tucked away inside the Charnel House for centuries was a Pièta and a well-preserved Danse Macabre fresco. The rather playful memento mori inscription reads: “What you are, we once were. What we are, you will become.”

Why was the Leuk Charnel House hidden? 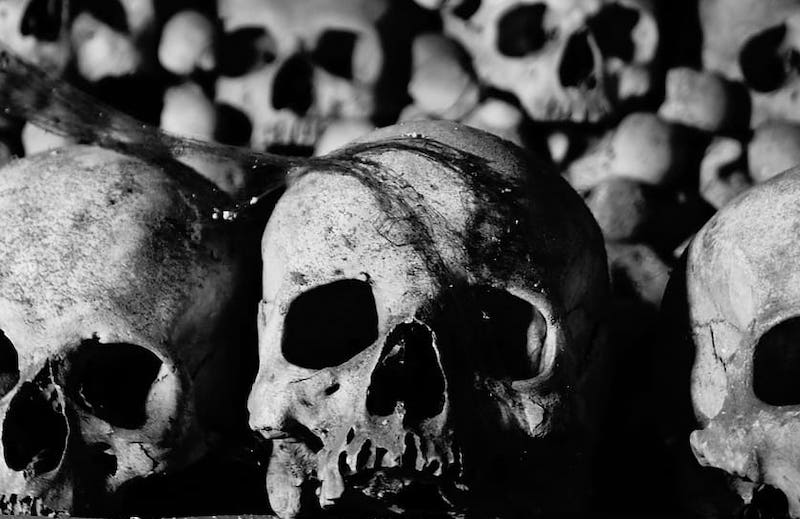 No one knows for sure why the charnel house beneath St Stephan’s was bordered up and forgotten. The most popular theory is that the local cemetery became too crowded. With space running out, the older bones were exhumed to make room for the newly deceased.

The discovery did wonders for other relics in Leuk mind you. Before the charnel house was found, several medieval buildings were up for demolition due to the ruined condition.

However, the secret ossuary renewed local interest in the town’s history. These other buildings were saved, and the town has become a popular stopping point for those making their way to the spas.

Where is the Leuk Charnel House?

St Stephan’s is a busy church with weddings and services throughout the week, so if you are unlucky, you may not be able to get inside.

This can be alleviated with a phone call before you arrive (see details above), or having a flexible schedule so that you can adjust your visit.

The charnel house is small so it will not take you long to check it out.

The walls packed with skulls are fascinating. Look out for some of the skulls pierced by what could be bullet holes. Some historians believe that these are the skulls from soldiers killed in the Battle of Pfyn in 1798.

The gothic church is beautiful too with some of the 26 statues currently on display there.