The village of Oradour-sur-Glane has stood in ruins since 1944. It is a very powerful dark tourist destination.

On 10 June 1944, the village, that was in the heart of Nazi-occupied France, was destroyed by a German Waffen-SS company.

In total, 642 of its inhabitants, including women and children were massacred.

The Destruction of Oradour-sur-Glane

In response to suspected Resistance activity in the region, the Nazi SS stormed the village and rounded up all the residents into the main square, where identity papers were examined.

Afterward, the men were led to barns and sheds where the SS had already set up their machine guns for mass murder.

This was not death by firing squad, however. The German soldiers shot the men in the legs so they couldn’t move and then covered them with fuel before setting the barns alight.

The woman and children fared no better. They were forced into the village church and the doors were barricaded. An incendiary device was then ignited.

The SS soldiers stood around the building and watched it burn. Any woman and child that tried to escape through the windows, was immediately mowed down with machine gunfire.

(There was only one survivor; a 47-year-old Marguerite Rouffanche managed to escape through a rear sacristy window. She crawled into some bushes and stayed hidden until the following day).

Satisfied that all the residents were dead, the Waffen-SS torched the village.

After the Second World War ended, the French president Charles de Gaulle declared that the remnants of Oradour-sur-Glane be left untouched. It would act as a permanent memorial and museum.

The ruins would remind future generations of the atrocities and futility of war.

Despite 76 years having passed since the massacre, items belonging to the villages can still be found among the scorched rubble of Oradour-sur-Glane.

Old sewing machines and bed frames lay within the debris. The burned, rusted shell of cars sit abandoned beside the crumbling walls and along the streets. It is extremely surreal.

Apart from the addition of signs and informative plaques, the remains of the ghost village have been left as they were.

A single sign above the entrance reads Souviens-Toi: “Remember.”

The best way to get to Oradour-sur-Glane is with your own transport. It is just a 30-minute drive west of Limoges, so a taxi/Uber from there is also an option. 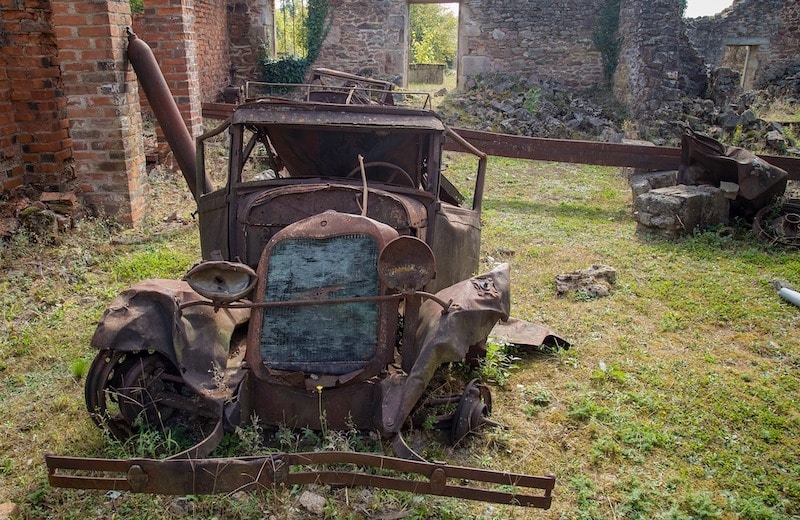 In 1999 a memorial museum, the Centre de la mémoire d’Oradour, was opened near the entrance to the village.

Inside are various personal items recovered from the burned-out buildings. There are watches stopped at the time their owners were burned alive. There are also glasses melted from the flames.

The museum also provides detailed information on the events of the massacre, as well as provide an insight into life in Nazi-occupied France during WW2.

On June 10, wreaths are laid in the village’s ruined church to mark the anniversary of the attack.