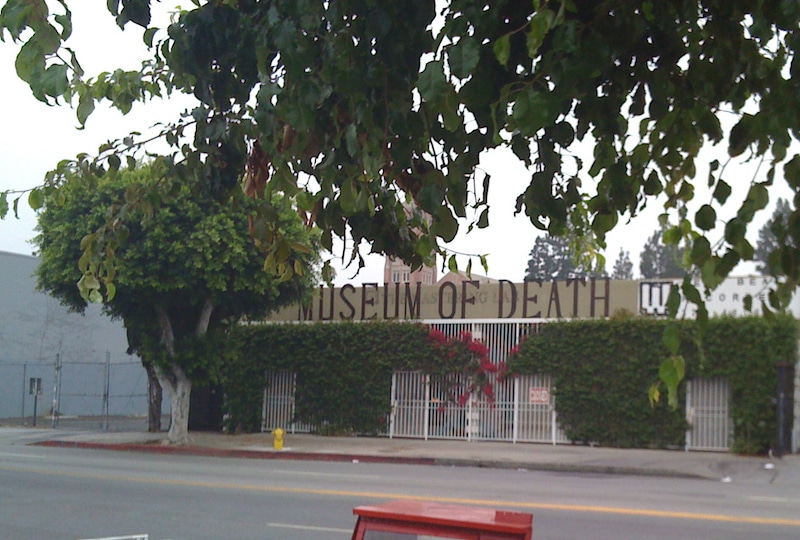 The Museum of Death, in Los Angeles, California boasts the world’s largest collection of serial killer artwork. That’s quite a claim to fame. It also has a vast collection of macabre exhibits related to, well you’ve guessed it, death.

No area seems to be off-limits when it comes to the subject; cannibalism, taxidermy, murder-cases, shocking images/videos of crime scenes, and depictions of autopsies are all on offer.

Although it veers dangerously close to the glorification of death and murder, (the coverage of Charles Manson is particularly troubling) it is nonetheless educational. For the dark tourists in LA, it will certainly be of interest. Just leave the kids at home.

History of the Museum of Death

The Museum of Death was first established in June 1995 by J. D. Healy and Catherine Shultz. As the founder’s state, the purpose of the museum is simply to “to make people happy to be alive“.

An honorable aim most will agree. And in some measures, you do walk out feeling happy that you’ve never had an encounter with a serial killer. But then I don’t need a museum to fill me with gratitude for that fact.

The original museum and collection were based in San Diego. According to the owners, the building was the city’s first mortuary.

It was born from a passion for the macabre it seems. Both Healy and Shultz would write to serial killers and request artwork from them, that they would promise to put on display as part of an annual exhibition.

After accumulating enough materials, (as well as other artifacts over the years) they decided to open to the museum in 1995.

The shift to LA happened in the late 90s. The pair gained a lot of (negative) media attention in their attempts to acquire a vast collection of materials from the Heaven’s Gate cult suicides.

They were aiming to buy enough of the original artifacts to recreate the scene of the suicides as a permanent exhibition. The distasteful nature of their aims led to them being evicted from the San Diago building.

Since 2000 the museum has been located on Hollywood Boulevard in Los Angeles.

From here on in the collection has grown exponentially, with the large collection of serial killer artwork, photos of the Manson crime scenes, and original photos from the Black Dahlia Murders being of particular interest to visitors.

Where is the Museum of Death?

Visiting the Museum of Death Today

The range of gruesome, macabre, and in many cases all out shocking artifacts and images on display at the Museum of Death are too many to number.

If you’d like to take a look at the guillotined, severed head of Henri Landru you can, it is there at the museum.

There is also body bag and coffin collection, as well as replicas of execution devices.

Some of the most graphic images include those taken at the infamous Sharon Tate murder scene, (the wife of Roman Polanski that met a bloody end at the hands of the Manson Family).

A photograph of her naked and visibly pregnant body covered in blood is difficult to look at and feels extremely sensationalist.

Photography from a lesser-known murder is also shocking. A couple that murdered the girl’s ex-boyfriend before sawing him into pieces, pose in front of the camera while holding the body parts. (they were caught after sending said images to the chemist for developing).

After this, you can walk into a room filled with animal taxidermy, before venturing into an area that contains a working Thanatron, one of the original suicide machines built by Jack Kevorkian.

Mortician and autopsy instruments are on display, as well as the aforementioned collection of serial killer artwork. An added ‘bonus’ is the reams of correspondence from murderers behind bars; it seemed the founders were pen pals with a large number of them.

Dotted around the museum are images and newspaper clippings detailing the murders of notorious killers such as John Wayne Gacy, Ted Bundy, and Peter Sutcliffe

In the end, the Heaven’s Gate mass suicide has been depicted; the exhibition includes the original beds.

Visit at the right time of year and you can take part in the Black Dahlia look-alike competition. Contestants can choose to dress as both pre and post-mortem Dahlia.

Walking around the museum is a self-guided tour experience that can last as long or as short as you can stomach.

As founder Healy states: “I think it shocks people, but it’s a good shock. Seeing all these artifacts of death in one place reminds people how precious life is.”

My advice is to definitely visit the Museum of Death if you are in the area, and see for yourself.

The success of the Museum of Death has led to the founders opening a branch in New Orleans in 2014.

Called the Musee de Mort Orleans has over 12,000 square meters of space. Apparently the LA building has not been large enough to house the complete collection for a number of years.

With only a 3rd of the collection being shown at any one time at the original Californian residence, the New Orleans branch has enabled the founders to display everything for the first time.

The Los Angeles building was once the home of Westbeach Recorders, and prior to that, Producers Workshop.

It is where Pink Floyd recorded parts of The Wall while in America. The walls still feature the soundproofing that aided recordings, providing an eerily quiet setting for the exhibits.