Bubanj Memorial Park in Niš, Serbia is located at the site of one of the largest mass executions of WW2.

It was built to mark and honor where more than 10,000 Serbs were rounded up and shot by German forces during the invasion.

Most of the victims were citizens оf Niš, meaning that the entire population was impacted in some way. Those that didn’t lose their lives, where undoubtedly close to someone that did.

Germans reached the Bubanj forest towards the end of 1941. By early 1942, they had set up execution squads that were charged with rounding up local Serbs, Gypsies, and Jews and delivering them to Bubanj en masse, via truck.

For the next 2 years, mass exterminations were carried out at the site. The only reason they ended was due to the advancing Red Army into Yugoslavia in the fall of 1944.

In order to dispose of the bodies, the entire area is intersected by trenches in which the victims fell and were buried after being shot.

However, as the allied forces circled, the Germans wanted to hide all evidence of the mass killings.

For this, they used Italian prisoners of war to dig up the decomposing bodies and have them burned.

The Nazis could not keep their atrocities hidden for long. Witness testimony from those that managed to escape execution, plus knowledge of the sheer numbers of Niš citizens that disappeared, meant that the area was soon considered hallowed ground.

By 1950, just 5 years after the end of the war, the execution site was marked by a memorial pyramid.

The existing monument of the famous “Three Fists” was commissioned by Yugoslav sculptor Ivan Sabolić in the early 60s.

The three concrete obelisks are different sizes in order to depict men’s, women’s, and children’s hands. It is also designed to symbolize the fact entire families were killed there. The clenched fists punching the sky depict the defiance of the local population to the enemy.

The monument was unveiled on 14 October 1963 and in my opinion, is the highlight of the park.

Where is Memorial Park Bubanj?

Memorial Park Bubanj is situated southwest of Niš. Another Serbian Cultural Property of Great Importance, Crveni Krst concentration camp is located 2km from the park and is definitely worth visiting while you are in the area. 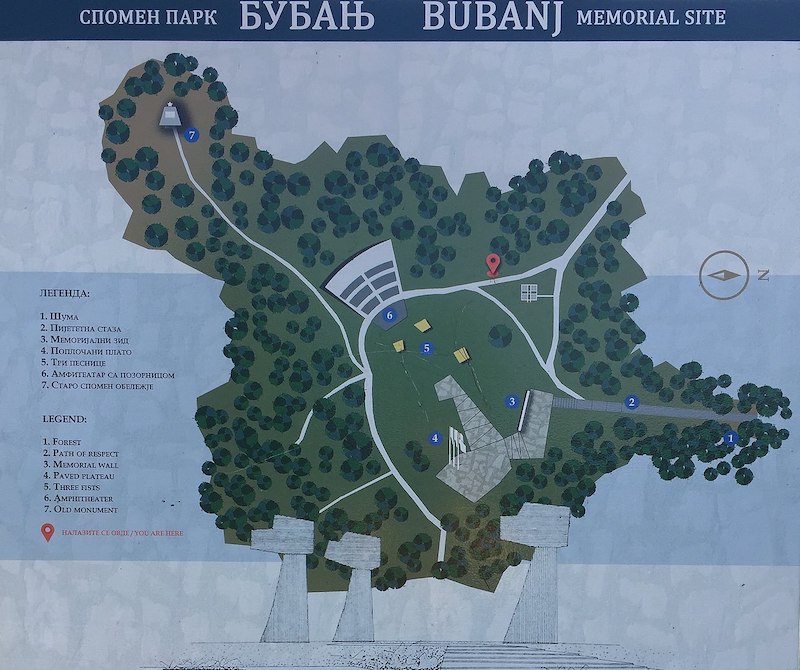 Bubanj Memorial Park is large. The open space exaggerates the starkness (especially on a bleak autumn day) that in turn helps to focus the visitor’s mind on the horrors that took place there.

That being said, the memorial trails and monuments are especially poignant.

The centerpiece to Bubanj is a marble relief standing 23 by 2.5 meters tall. It is made up of five compositions that represent the path of the war on the local population.

One part symbolizes the firing squads, another the executions. The civil revolts are depicted, as is the surrender of the German invaders and the eventual victory of the Serbs.

New additions to the park have been made in recent years. In 2004, a chapel built of glass and metal was added to the complex. What is now the memorial hill to the site was redeveloped in 2009.

Essentially, the entire site is a monument. The park itself is meant to pay honor to all of those that lost their lives in such a tragic way.