During World War One, Fleury-devant-douaumont became known as one of the villages that died for France.

Caught in the midst of The Battle of Verdun, (one of the longest and fiercest artillery battles of the Great War), French and German soldiers razed the village, alongside 8 others during the ongoing carnage.

The battle raged for over 300 days, and was fought with so much ferocity, the combat zone became heavily contaminated with lead, arsenic, and lethal poison gas from the high level of shelling.

The damage to the villages was absolute. After the war, France determined that most of them could not be rebuilt.

Today, Fleury exists only as markings that outline the site of the original village. With its bomb craters and battle strewn terrain (where artifacts from the war can still be found in the soil), it is an important military tourism location.

The village, alongside nearby monuments such as the Verdun War Memorial and Douaumont ossuary, serves as a poignant reminder of the devastation brought upon France in the First World War.

The scant remains of Fleury-devant-Douaumont are located in the Grand Est in north-eastern France.

The village was much like others in the area before the German invasion. A small population of 422 people living a simple rural life on the back of agriculture and woodworking.

However, it’s a position not far from the western border of Germany meant that conflict was inevitable as the Great War progressed. In 1916 the village was captured and recaptured by the Germans and French forces a total of sixteen times.

During the fighting, approximately 230,000 men died out of 700,000 casualties. The Battle became known in German as Die Hölle von Verdun (The Hell of Verdun).

At the epicenter of such brutal wrangling, the village and others within what is now called the red zone did not stand a chance.

After the war ended in 1918, the French government deemed 1,200 sq km of land near Verdun too dangerous to inhabit.

Contaminated by corpses, explosives, and poisonous gas, Fleury-devant-douaumont was beyond rehabilitation. To this day, only 2 of the 9 villages that were raised during the war have been rebuilt.

Although no-one lives in any part of the Red Zone (with some of it fenced off to visitors for being too dangerous), French law recognizes the destroyed villages as municipalities.

With designated mayors who receive government money to receive guests and preserve the memory of what’s left, sites such as Fleury-devant-douaumont are deemed safe enough to be open for the public.

Local museums and other sites of interest have been erected to memorialize the soldiers who lost their lives in the bloody Battle for Verdun.

Nothing remains of Fleury-devant-Douaumont except for a smattering of stone foundations where some of the buildings once stood.

Walking into the village, visitors can follow a thin path through the ruins. Markings show where certain landmarks once existed, such as the grocery store, the school, and the blacksmith’s barn.

With a stretch of the imagination, it is possible to imagine the 19th-century village with its humble inhabitants going about their lives before war destroyed it all.

The evidence of war is everywhere, however, as the terrain is pockmarked with shell craters. Venture too far from the path (which visitors are recommended against doing), and it is still possible to stumble across macabre remnants of the war.

For example, in 2013 archaeologists unearthed 20 skeletal remains after hikers found bones protruding from the soil near the village.

It is still possible to trace the lines of people’s homes, and throughout the village, several small memorials have been erected that cause visitors to reflect on the futility of war, and why such mass bloodshed can never happen again.

Parts of the old fortification network exist too. It is possible to walk along one of the communication trenches (where soldiers would have scurried across carrying messages), the end of which stands the hidden, moss-covered ruins of a bunker.

A quick rummage here and there and you will likely locate metal fragments of exploded shells. The area is littered with them.

The forest now encroaches on this part of the village. Nature has claimed what humans destroyed.

Other WWI sites in the area

There are a number of other sites in and around the red zone that should be visited when in the area.

Just outside the Red Zone, is a small private museum named Romagne ‘14-‘18. This provides a poignant retelling of the Battle of Verdun from a personal perspective of those that lived and fought there.

The large collection of war memorabilia, developed from a private collection owned by local Jean-Paul de Vries, is fascinating and well worth a visit.

South of Fleury-devant-Douaumont, is the famous Mémorial de Verdun. Opened in 1967 by the French government, the museum and memorial give visitors a comprehensive view of WWI.

The location of the memorial is on what was once, the battlefield. It remembers both French and German soldiers as well as local citizens caught up in the fighting.

The military museum includes rifles, machine guns, and field artillery as well as vehicles, uniforms, and general equipment that were used by both sides in the war. 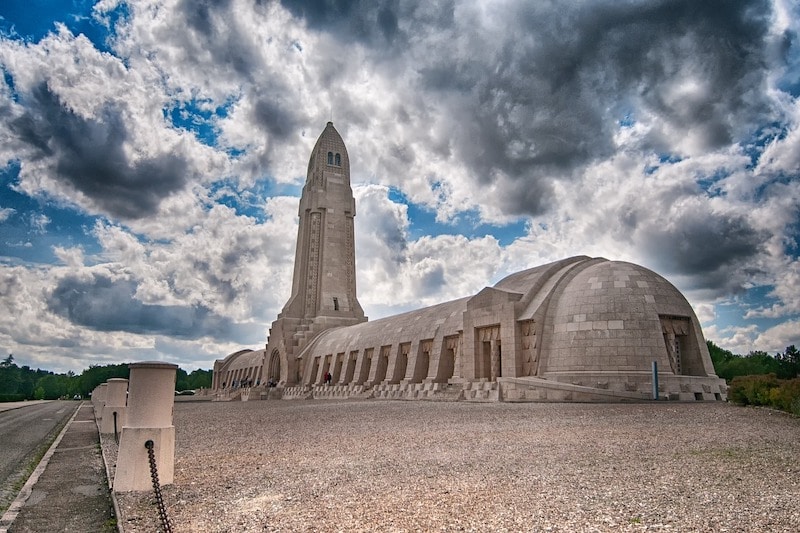 The Douaumont National Necropolis and Ossuary is also located close to Fleury-devant-douaumont.

The imposing ossuary contains the skeletal remains of approximately 130,000 French and German soldiers, making it one of the largest of its kind in the world.

Inside the ossuary, the ceiling and walls are partly covered by plaques bearing the names of French soldiers who died in the battle.

In front of the monument, is the largest French military cemetery of WWI. It contains 16,142 graves. Christian, Jewish, and Muslim names adorn the white headstones, a reminder of how French colonial forces were instrumental to the war effort.