The abandoned beach resort Varosha is a very strange place.

Where else can tourists sip cocktails beside the turquoise waters of the Mediterranean, while gazing towards a fenced-off, forbidden ghost town, where entry is illegal and could result in being shot?

I can think of nowhere else.

The resort has been off-limits to the public since 1974. It was then that a coup against the Cypriot government (backed by Greece’s ruling military junta) resulted in Turkey invading Cyprus from the north.

As the Turkish troops reached Famagusta, hundreds of thousands of Greek Cypriots were expelled and driven further south. They fled their homes, intending to return when the situation calmed down. This failed to happen of course.

With Cyprus now split between the Greek-controlled south and a Turkish-controlled north, a formal geographic divide was established.

This led to a UN buffer zone called the “Green Line” being set up. Its path is straight through the now-abandoned Varosha beach resort.

Varosha in its heyday 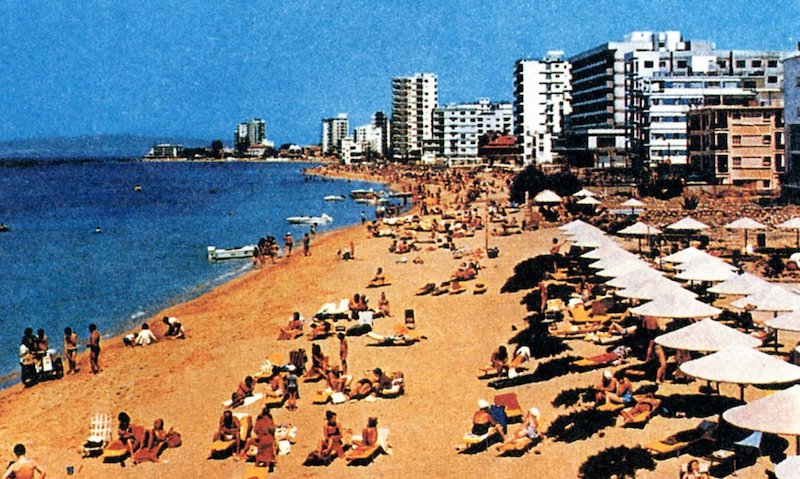 Before the division, Varosha was booming. Titles such as the “French Riviera of Cyprus” were thrown around, and the rich and famous were drawn by some of the best beaches in that part of the Mediterranean.

Richard Burton and Brigitte Bardot were fans. The grand, Argo Hotel on JFK Avenue was apparently one of Elizabeth Taylor’s favorite haunts.

Tourists came from all over the world, and the resort oozed glamorous modernity with its exotic island location, and contemporary, hi-rise accommodation.

The invading Turks put a stop to all that. A total of 39,000 residents fled and were soon replaced with gun-toting soldiers.

The entire resort has been left unmaintained for over 40 years. Those once modern buildings have decayed and are slowly collapsing.

The perimeter of Varosha is lined with high walls, barricades, and barbed wire. Signs warn those that peer across the fences that “photos and movies are forbidden.”

You have to be careful revealing any phone or photographic device near the edge of Varosha, (although people do clearly risk a covert snap). A harmless tourist selfie facing the opposite direction is enough to have a heated altercation with a soldier should they see you.

Don’t even think about crossing over into the forbidden zone. Trespassers risk being killed.

The internet does, of course, have images from within the decaying ghost town. However, those daring to venture inside rarely reveal themselves publicly, due to fear of the consequences.

Images of the Famagusta ghost town car showroom are particularly interesting. Like a time capsule, the dealership is stocked with the cars that were on sale in 1974. Some of them still have the price tag on the windows.

There are shop displays with mannequins dressed in 70s fashion and other bizarre sights of a city frozen in time.

Where is the Varosha Ghost Resort

Varosha is of course completely closed off to the public.

However, the site is so large and the perimeter easily accessible that a simple visit to Famagusta means you can walk along the streets that border the forbidden zone. There is plenty to see from the fence.

The best way to experience the Varosha ghost resort is with a guide. They will bring the history to life and will show you subtleties beyond the crumbling balconies that will stay with you, long after the trip.

Just remember to leave your phone, safely out of sight.