In the spring of 2017, I traveled the Trans Siberian from East to west. I started in Beijing and finished in Moscow, a route I highly recommend as far fewer tourists take it.

Along the journey, I was able to explore many dark tourism sites. It’s a sad fact that Russia and countries of the former Soviet Union are well catered for in this regard.

One particular historical incident that had captivated me for many years was the plight of the Romanov family in the hands of the Bolsheviks. It is a harrowing series of events that happened very close to the city of Yekaterinburg; one of the stops on the Trans-Siberian.

In short, I had to check it out.

Throughout most of 1918, Tsar Nicholas II, his wife Alexandra, and their five children, Alexei, Olga, Tatiana, Maria, and Anastasia were held captive by the Bolsheviks.

After Nicholas II had been overthrown in the Russian Revolution, the Romanov family along with a small entourage of servants had been moved from place to place as their captors decided what to do with them.

Transported from where they had enjoyed relative comfort in Tobolsk, their final destination was to be the harsher conditions of Ipatiev House; codenamed “The House of Special Purpose’ on the outskirts of Yekaterinburg.

Owned by local mining engineer Nikolai Ipatiev, the windows of the late 19th Century villa were painted black so that family was held in darkness for much of the time.

The perimeter of the residence was fortified with large walls and Bolshevik soldiers guarded the house and grounds.

In total, the Romanov family would spend 76 days there, held against their will.

During the early hours of 17 July 1918, members of the Cheka (secret service) led by Yakov Yurovsky entered the house and rounded the prisoners up into the basement.

It was there that Tsar Nicholas, his wife, children, and servants were executed by firing squad.

The cold-blooded execution was made even more gruesome by the inept manner in which it was carried out.

Yakov Yurovsky killed the tsar from point-blank range. However, although the other men had been assigned a target each, they failed to follow on those orders and began to fire indiscriminately.

The Tsarina and her daughters were not killed instantly by any means.

Where bullets had failed to bring a mercifully speedy death, Yakov Yurovsky and his men began to use the butts of their guns, bayonets, and knives to finish the execution.

Witness testimony that remained state secret until after the fall of the Soviet Union, indicated that it took multiple attempts and up to 20 minutes to kill every family member.

Murder of the Imperial Family – The executioner Yurovsky’s account

For an alarmingly coherent, matter-of-fact account of the execution you can read excerpts from Yakov Yurovsky’s memoirs describing the events of 17 July 1918 and the days afterward. I actually found it quite harrowing and is an essential read for anyone interested in the Romanov murders and are planning to visit the related dark tourist locations. [Read Here]

During the Soviet period, the building housed a local museum of atheism. However, people still came to pay their respects to the memory of the royal family.

In order to stop the monarchist sympathizers, then governer Boris Yeltsin ordered the building to be demolished in 1977. However, the basement of the structure remained and visitors still came to the abandoned location.

After decades of communist rule that sought to rid the Romanov name from history, approval was given in 2000 to erect a church on the spot of the murders. In  2003 the aptly named Church on Blood in Honour of All Saints opened, with the basement of the original becoming a part of the structure.

How to Get to Ekaterinburg 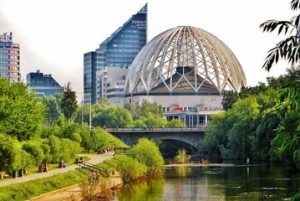 This affordable tour takes between 3-4 hours. Visit major places of interest in Yekaterinburg with transportation included.

It covers the tragic story of the Romanov family and includes visits to Church on the Blood and the Chapel of St. Elizabeth. The tour also takes you to Red Army Square, and to the 19th-century villas of wealthy gold merchants from the Urals.

MOST DETAILED: The Story of Nicholas II and the Romanov Executions 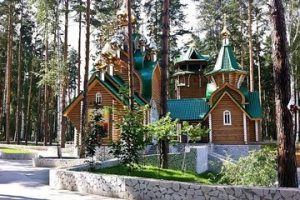 This professionally guided tour covers the history of the Romanov executions in great detail.

This also visits the famous Church of the Savior on Spilled Blood and the Orthodox monastery of Ganina Yama.

It takes 4 to 6 hours to complete and hotel pickup can be organised too.

The diabolical nature of the execution continued as the soldiers were then ordered to dispose of the bodies.

Yurovsky and his men threw the dead into a truck and drove them to a remote derelict mining facility near the village of Koptyaki, 15 km north from Yekaterinburg. (Better known as Ganina Yama).

There the Cheka ring-fenced off the area and were ordered to shoot on sight if any locals ventured too close to investigate.

The bloodied Romanov bodies were stripped so that the jewels hidden in their clothing could be confiscated. They were then covered in sulphuric acid in order to disfigure the faces.

After this, the corpses were thrown down a 9ft mineshaft where Benzene was poured and the bodies set alight.

Finally, grenades were thrown into the shaft in an attempt to collapse the structure on top of the dead.

The Ganina Site today is a very popular dark tourism destination for both Russians and foreign visitors. A monastery now exists at the site and in 2001 the Russian Orthodox Church (along with financial assistance from the Ural Mining and Metallurgical Company) constructed a poignant memorial to the 7 Romanov family members in the form of 7 wooden chapels.

A cross also marks the location of the shallow mine where the bodies were originally dumped, (see image above).

To this day, Ganina Yama is the “official” burial spot of the Romanovs. However, their bodies were actually hidden at a second burial site close by.

A week after the execution, the White Army had managed to drive the Bolsheviks from the area.

Gaining control, they immediately launched an investigation into the fate of the Romanovs. It didn’t take them long to find evidence of the carnage that had taken place at both Ipatiev House and the mine at Ganina Yama.

An extensive report carried out by a criminal investigator named Nikolai Sokolov concluded that the Romanovs had been cremated at the mine. Charred bones were discovered, however, no bodies were to be found.

It transpired that Yurovsky and his men had returned to the first burial site the night after the execution. They disinterred the bodies and began a search for another, more secluded site to hide the Romanov remains.

This location was not discovered until the late 1970s.

The second burial site is located four and a half miles from Ganina Yama, in a field known as Porosyonkov Log (“Piglet’s Ravine”).

The discovery came about through the clandestine research of Geli Ryabov, a filmmaker with the Soviet Ministry of Internal Affairs, and a local geologist named Alexander Avdonin.

Throughout the 70s Avdonin had heard rumors about the potential whereabouts of the Romanov bodies and with the help of the well-connected filmmaker began to gather information.

Finally, in 1979 following assistance from Yurovsky’s son no less, he found the grave not far from the house in which the Romanovs were slain.

However, the political climate of the time meant it was potential suicide to reveal their discovery. They reburied the bones and did not speak of the location officially until 1989 and the approaching collapse of the USSR.

Rediscovery after the fall of the Soviet Union

Although the second burial site at Porosyonkov Ravine became public knowledge in the early nineties, it wasn’t until 1995 that the remains were officially identified as Romanov.

An investigative team employed by the state interred thousands of bones and other relics belonging to the imperial family from the site.

DNA analysis using living relatives of Nicholas and Alexandra’s parents confirmed that this was indeed the final resting place of the Romanovs.

After the investigation, the remains were buried in St. Petersburg cathedral and the Romanovs were declared saints in the Russian Orthodox church.

The official investigation conducted in 1995 showed that two of the children’s remains were missing: Maria and Alexei Romanov.

This led to an abundance of theories as to the children’s whereabouts and the fact that they had possibly survived.

These were brought to an end in 2007 after a builder named Sergei Plotnikov, (he was part of an amateur club that looked for the missing Romanovs) came across bone fragments.

Plotnikov had discovered a smaller pit at the Porosenkov Ravine site, where the remains of the two missing children had been dumped.