The Tomsk memorial museum is housed within a former NKVD (Stalin’s secret police and a forerunner to the KGB) headquarters and prison and is a stark and gloomy place to visit.

Which is not surprising considering the unspeakable horrors that once took place there.

The museum attempts to highlight what life was like during the height of Stalin’s terror in the 1930s.

It shows what happened to ordinary citizens whose only crimes were disobeying the views of Stalin.

Short History of the NKVD

On the surface, the NKVD (People’s Commissariat for Internal Affairs) acted as an ordinary police force and carried out enforcement duties as you would expect.

However, the much-feared element of the NKVD was the classified activities that they had the power to undertake.

Acting at the whim of Stalin’s paranoia, huge political repression was at the center of the dictator’s rule. He sanctioned political murders and assassinations on a grand scale and the NKVD were the ones that did most of the dirty work.

The NKVD Prison in Tomsk

Far out in the Siberian steppe is the remote city of Tomsk. It is one of the oldest cities in Siberia and in winter it is as bleak as you might imagine.

In fact, during Soviet times Tomsk was a “closed” city which meant Soviet citizens without the relevant passes could not enter. Foreigners, of course, couldn’t get anywhere near it.

The former NKVD prison was active throughout the 1920s into the 1940s, and for many, it was the first stop before being sent onto one of the many Siberian Gulags.

Harsh interrogation bordering on torture was commonplace. The lives of many innocent victims were destroyed here.

Incarcerated for speaking out against the ills of Stalin, the suffering endured for simply having an opinion, is difficult to comprehend. 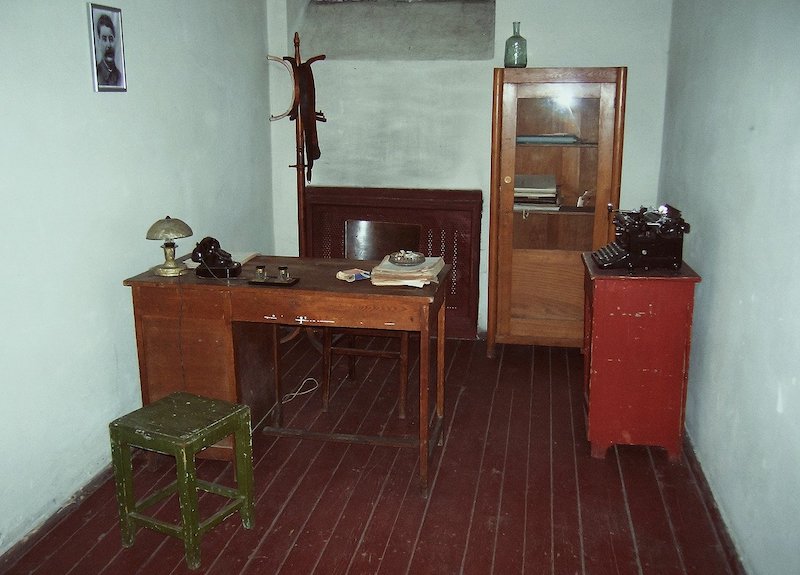 Established in 1995, the Tomsk NKVD Museum was the first museum to focus on the history of political repressions to appear in the post-Soviet landscape.

It was a very important step, especially when you consider that this was just a handful of years after the fall of the Soviet Union.

Visiting the museum today and you can experience permanent exhibitions such as the renovated jail corridor, the inside of an investigator’s office and being inside a prison cell.

Former cells are also used for the different sections of the museum. These are specific to repressions that occurred in the Tomsk region and include exhibits called “The Great Terror”, “Execution Quest”, “Kolpashevsky Yar”, and “The Gulag and Narym krai Settlers”.

The museum also contains biographical materials and copies of documents that once belonged to famous dissidents who spoke out against Stalin. These include items by poet N.A. Klyuev, and Duke M.M. Dolgorukov.

There are also artifacts that provide insight into the nature the more everyday nature of the former prison and life inside for both victim and captor.

This section of the museum contains copies of investigation files, administrative letters, and notes. There’s the “mundane” personal items of incarcerated local citizens as well as small trinkets that were made by the prisoners.

After returning from exile, Nobel Prize-winning author Alexander Solzhenitsyn was the first honorable guest to visit the museum.

The building also operates as a historical victim resource center with an electronic database containing the information on over 200,000 people that were known to have suffered at the hands of the NKVD in the Tomsk Oblast.

While visiting the museum you should also head to Memory Square which is situated close by.

Here you will find monuments to the victims of Bolshevik terror in the Tomsk region. There are also poignant memorials dedicated to other repressed peoples that lived and suffered throughout the wider Soviet Union.

The Museum and the Square are said to be one of the most visited sites in Tomsk, so ensure that you check them out.

Where is the Tomsk Memorial NKVD Prison Museum?

English-language tours should be booked in advance in order to guarantee an English speaking guide on the day you arrive. A lot of the exhibit descriptions are in Russian so a guide is highly recommended.