On the 16th of October 2006, two Russian men walked along Grosvenor Street, a wealthy area of central London.

Their names were Andrei Lugovoy and Dmitry Kovtun and they had been sent to this location under very special circumstances.

In their bag they were carrying something so lethal, yet so strange that British customs had failed to detect it when the two men had arrived in the country that very morning.

The substance was Polonium – 120, generally regarded as one of the most toxic poisons known to man if swallowed or inhaled.

Po – 120 is a highly radioactive isotope. To put this into perspective it is approximately 100 billion times more deadly than hydrogen cyanide.

Lugovoi and Kovtun had been sent to the U.K by Russia’s FSB spy agency. Their job was to poison a man named Alexander Litvinenko, a former Russian FSB officer, turned dissident who was now employed by MI6.

An operation of such severity was very likely approved by the head of Russia itself, President, Vladimir Putin.

For dark tourists in London interested in the events that took place surrounding the assassination of Alexander Litvinenko, there are a number of related locations that can be visited. Below we have listed some of the most significant ones. For a detailed account of the events, read on below.

The Russians headed to 25 Grosvenor Street for a 3 pm meeting with Litvinenko and a man named Tim Reilly at the security firm Erinys.

What followed was an almost comedy of errors as the two men tried to carry out the assassination.

Their plan was to slip the Polonium into Litvinenko’s drink. However, they also needed Reilly to leave the room as they did so.

An in-depth enquiry afterward revealed that the men were overtly pressing in the need to have some tea, (Litvinenko originally declined as he had already drunk water from the cooler).

Their chance to deploy the substance finally came when Reilly went to the toilet, Litveninko was distracted by one man, while the other slipped the polonium into the tea. (It was unclear from the forensic evidence who did what).

After this, the would-be assassins continued the meeting waiting for Litvinenko to take a sip.

Which he didn’t do.

For the rest of the meeting, the drink remained untouched in front of him, until finally, with all matters concluded all four men left the building.

The first assassination attempt had failed.

It seems that Lugovoi and Kovtun had no idea just how dangerous the substance they carried was. Either that or they were incredibly stupid.

As journalist Luke Harding described in a report after the investigation, their behavior was “idiotic, verging on suicidal”.

After the first assassination attempt, the two men left a trail of radioactive isotope where ever they went in London.

Disposing of the Polonium in Lugovoi’s hotel bathroom (room 107), at the Best Western, Shaftsbury Avenue, caused high levels of radiation in the u-bend and sink.

Lugovoy and Kovtun also visited a bar close to the hotel, named Dar Marrakesh. Here traces of Po – 120 were found on a Shisha pipe.

On the 17th of October, after realizing that their room must be dangerously contaminated, they checked out, stayed for one night in the Parkes Hotel, Knightsbridge (in rooms 23 and 25) before catching a plane back to Moscow the following day.

A second unsuccessful assassination attempt was carried out on the 25th of October 2006.

Lugovoy and Kovtun flew to the U.K again for another meeting with Litvinenko in central London.

Lugovoy stayed at the Sheraton Park Lane Hotel in room 848, and the meeting with Litvinenko was in the hotel bar.

This time the poison was not administered at all, due to security cameras being present.

Just as before, traces were found all over the hotel room. In fact, the official Litvinenko Enquiry by Sir Robert Owen, states that the readings taken there were the highest found in the entire investigation.

A leaking container caused them to use hand towels to mop up the radioactive spillage. They also disposed of the unused polonium via the toilet.

Having failed a second time, Lugovoy and Kovtun left London.

The 3rd attempt by Lugovoy and Kovtun to poison Litvinenko happened on the 1st of November 2006.

The location, the Millennium Hotel in Grosvenor Square, was close to their first unsuccessful attempt at the intelligence agency.

The lethal dose was administered in a cup in the Pine Bar of the hotel. High levels of Polonium -120 were also found in the bathroom plughole of room 382, where Kovtun was staying.

Tellingly, no signs of radioactivity were found on the bus that Litvinenko traveled to the hotel on. He was successfully poisoned sometime during that 5 pm meeting at the hotel.

Polonium also traced the path that Lugovoy and Kovtun took after the assassination.

Scientists conducting the investigation found radioactive contamination at a Coventry Street Steak House, (presumably they were celebrating their success). From there, Lugovoy headed to watch Arsenal play at the Emirates Stadium. Secondary contamination was found on his seat.

Over the next 3 days, everything Litvinenko touched at home in Osier Crescent, Muswell Hill became contaminated, (it would be over 2 years until his family could safely enter the house again). A car he traveled in also had to be scrapped.

During this short period, his health steadily worsened. Litvinenko experienced vomiting and severe diarrhea, and could not walk unassisted.

Finally, on the 3rd of November 2006, he was rushed in an ambulance to Barnet Hospital, London. 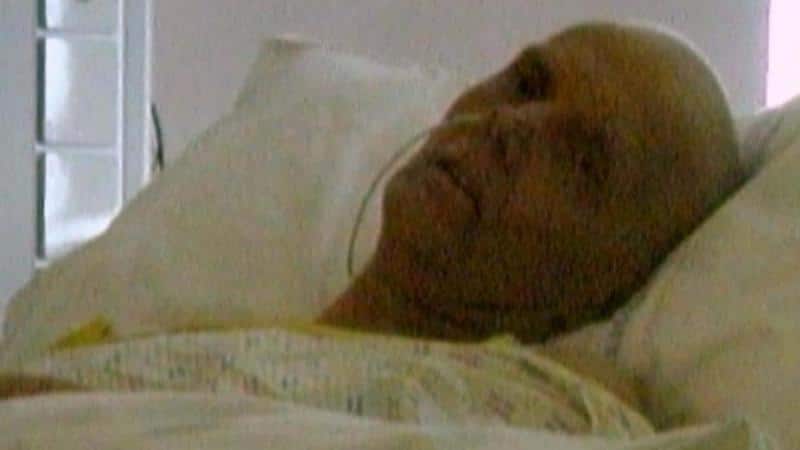 For 19 days until his death, Litvinenko remained in intensive care (he was moved to University College Hospital after a few days in Barnet) where tests were conducted to ascertain the cause of his ill health.

It is believed that one of the reasons Polonium was used for the assassination is that on initial prognosis it is difficult to detect.

Litvinenko’s blood and urine samples were sent to the UK’s Atomic Weapons Establishment (AWE); however, no distinct gamma rays were initially detected.

However, there was a small gamma spike, that after overhearing a conversation about the tests, a different scientist (who had worked on Britain’s early atomic bomb program decades before); recognized it as the radioactive decay of polonium-210.

From that point on the authorities knew what they were dealing with, and a capital wide investigation was soon underway.

Litvinenko finally passed away from heart failure on the 22nd of November 2006.

In his last statement before his death he said the following about Vladimir Putin:

…this may be the time to say one or two things to the person responsible for my present condition. You may succeed in silencing me but that silence comes at a price. You have shown yourself to be as barbaric and ruthless as your most hostile critics have claimed. You have shown yourself to have no respect for life, liberty or any civilised value. You have shown yourself to be unworthy of your office, to be unworthy of the trust of civilised men and women. You may succeed in silencing one man but the howl of protest from around the world will reverberate, Mr Putin, in your ears for the rest of your life. May God forgive you for what you have done, not only to me but to beloved Russia and its people. 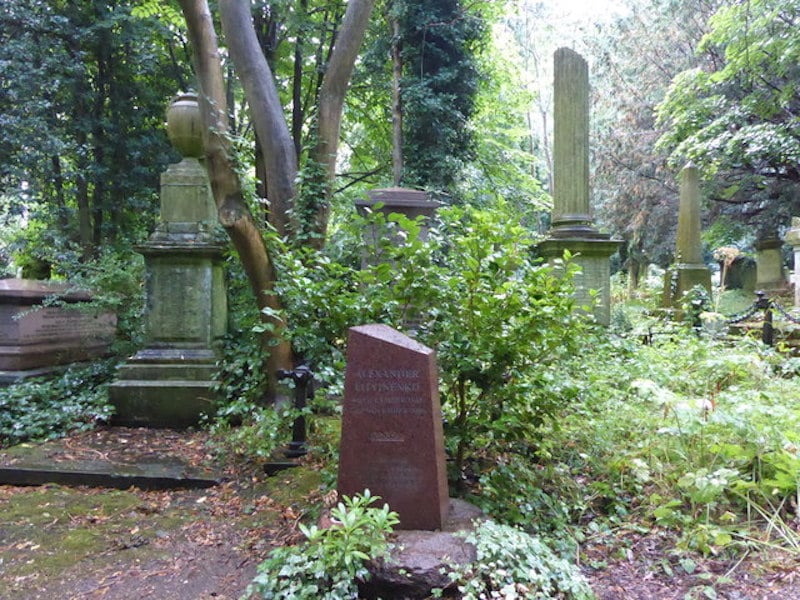 For two days, Alexander Litvinenko’s body remained at the location of his death due to its radioactive state.

What has been called the most dangerous autopsy ever conducted in western medicine was then carried out. All parties present had to wear two protective all bodysuits with their gloves taped at the wrists.

Filtered air was also pumped into their hoods for them to breath.

Alexander Litvinenko’s funeral took place on 7 December at a Central London mosque, (he converted to Islam on the last day he was alive).

Due to the radiation, his body was buried in a lead-lined coffin at Highgate Cemetery in North London.

Highgate is one of the most attractive Victorian cemeteries in London. There are literally thousands of gothic style headstones, memorials and tombs, some of which belong to some very famous individuals (see box below).

Highgate Cemetry has a website that will give you details of where certain plots are situated; however, just walking through the graveyard is a highly recommended dark tourist experience for anyone visiting London.

The huge site is full of large trees, wildflowers and shrubs. Adding to the slightly eerie atmosphere is the fact that nature has been left to grow with minimum human interference. It really is a beautiful space in the midst of busy North London. 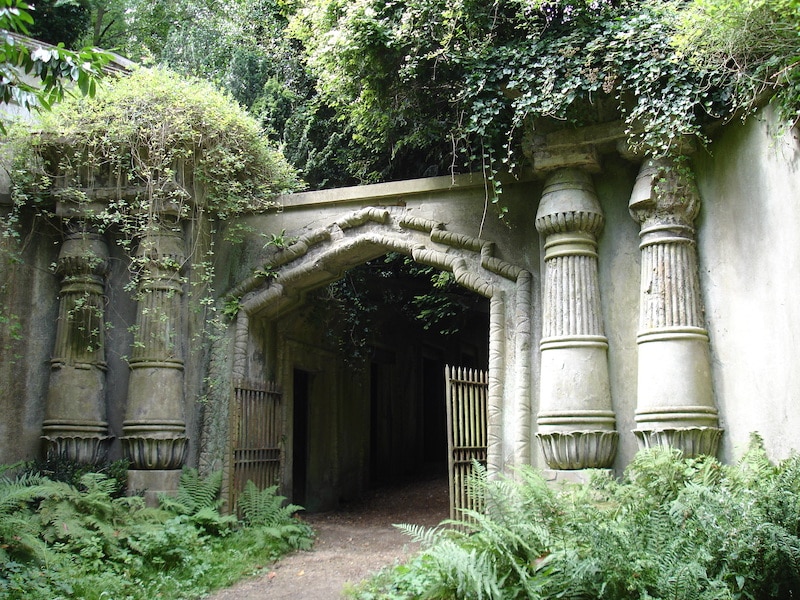 The cemetery is split into two. The east side has an entrance fee and members of the public can roam freely. However, the west side is open via guided tour only.

Alexander Litvinenko was buried in the West Cemetery. For dark tourists looking for further information on how to book a tour, and to view his grave, head here.