Villa Epecuén was once a bustling tourist town along the shore of Lago Epecuen. The salt lake, some 600 kilometers away from Buenos Aires was a popular holiday spot for many decades in the 20th century.

People would flock from all over Argentina to enjoy the healing properties of the highly salted water.

The resort was especially popular among the rich and famous, a fact that only added to its glamour, with high-quality businesses set up to service the elite clientele.

From the 1920s up until the 1970s Villa Epecuén thrived as a result, with hotels, restaurants, and the locals enjoying an extended period of prosperity. At its peak, 25,000 tourists were visiting during the summer season each year. 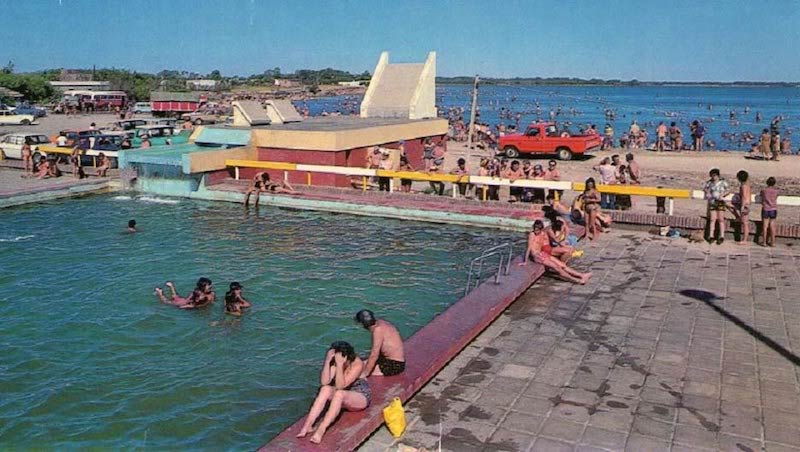 A long-term weather event during the early 80s saw higher than average rainfall in the surrounding hills of the lake and town.

Lago Epecuen gradually began to swell, until, on November 10, 1985, the waters broke through a dam and flooded the entire resort.

Consumed by saltwater up to a depth of 10 meters, over 280 businesses and countless homes disappeared into the murky depths. Villa Epecuén was abandoned and would never be the same again.

For nearly 25 years the town laid beneath the waters of Lago Epecuen, until finally, in 2009 the wet weather began to reverse.

Slowly, the town re-emerged from the salty brine. Expectedly, Villa Epecuén was completely destroyed. Deemed a disaster area, the government did not come forward with any plans for reconstruction.

The desolate ghost town with its dilapidated buildings, dead, skeletal trees, and rusted vehicles poking through the low laying waters is an eerie sight. The entire landscape has been bleached white by the once-healing salt. It is a ravaged, post-apocalyptic vision.

For that reason, (dark) tourists from all over the world come to take photographs and admire the totality of the ruined Villa Epecuén.

There is no sign of commercial activity in Villa Epecuén today. You certainly cannot book any accommodation within the town, however, transport to the site is strangely reliable.

Coaches operate daily from the Retiro coach terminal in Buenos Aires to Carhué. These are run by General Belgrano Pullman (gralbelgrano.com.ar) and Chevallier (nuevachevallier.com).

From Carhué you can reach the ghost town either via a booked tour or taxi/local operator.

One building that still stands in a recognizable state is the monumental slaughterhouse created by revered Argentine architect Francisco Salamone. It holds the fort at the entrance to the town and is subject to many visitor photos. 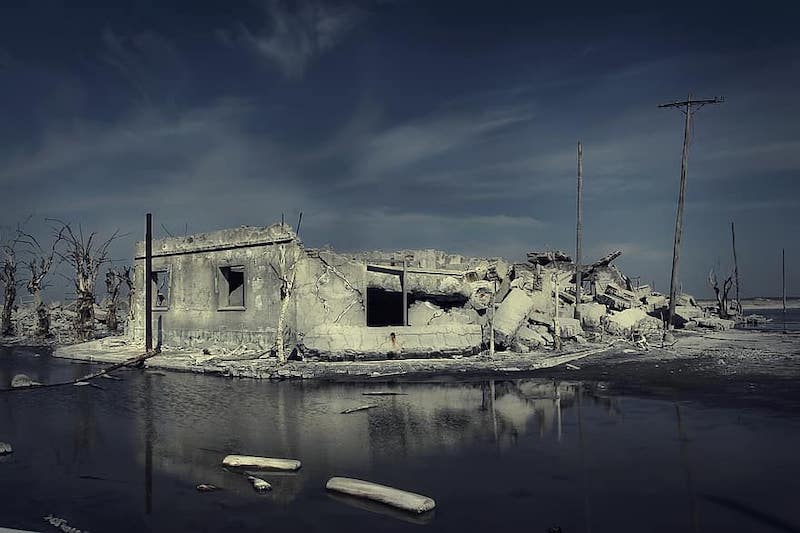 There is also a small museum covering the history of the town, in what was once the train station. Here you will find artifacts such as old clothing, records, and other items rescued from the rubble.

Amazingly, there is one resident left in Villa Epecuén. Pablo Novak, 88, returned to his home in 2009 after the waters receded. He has been living here ever since and been the subject of documentaries, tv programs, and media interviews about the town.

Pablo’s Villa (2013) is especially worth a look. The award-winning documentary explores Pablo’s life as well as the history and demise of the resort.

As the only permanent resident states, he has no plans of leaving Villa Epecuén:

“As long as I can walk and tell the story of my life, I will stay here in my Ranchito.”

You may well see him if you make a visit.