In a remote location, hidden deep in the forests of Poland are the remains of Wolf’s Lair (Wolfsschanze). This was the secure headquarters for Adolf Hitler in World War Two and is also the location where Operation Valkyrie took place.

The remains of the bunker where Hitler was nearly blown up with a suitcase bomb can still be found.

Protected by nearby lakes and marshes the site is slowly being usurped by nature. However, it is open for visits, and Wolf’s Lair is a must-see location for any dark tourist in Poland.

Wolf’s Lair played a very important role in WW2. Hitler and his cronies spent over 800 days at this large, secret complex between 1941-1944. In fact, the German dictator spent more time here, than he did inside the Berlin bunker.

The compound was made up of 80 buildings, some of which were reinforced concrete bunkers designed to keep high-ranking German Officials such as Göring, Bormann, and of course Hitler, safe as they carried out their plans.

Decisions that led to the deaths of millions were made at Wolf’s Lair, including the construction of the death camps and the German attacks into Russia.

Built in 1941, the heavily fortified headquarters were protected behind multiple layers of security. It was positioned miles from the nearest village and the site remained a well-kept secret throughout the war.

However, one German colonel knew of its whereabouts. He also knew which of the buildings to target in the hope of assassinating Hitler and ending the Nazi regime. 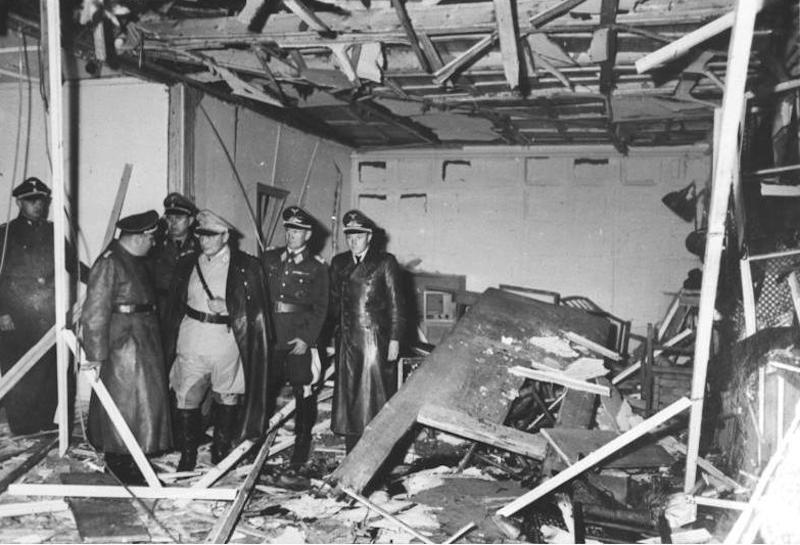 Colonel Claus von Stauffenberg (along with other high-ranking officials) had a brave plan to kill the Nazi Leader.

In a plot known as Operation Valkyrie, Claus von Stauffenberg managed to infiltrate Wolf’s Lair and leave a suitcase bomb in the room with Hitler.

His position as Chief of Staff of the Reserve Army meant that he had occasional face-to-face access with the Führer to hand over reports.

After several failed attempts, Stauffenberg successfully detonated a bomb inside the complex on 20 July 1944. He then hurried back to Berlin to assume his role for the Reserve Army coup.

All did not go to plan however. Although Hitler suffered minor injuries, he was protected by the large conference room table that shielded the bomb’s blast from killing him.

Operation Valkyrie had failed. Stauffenberg and other leading conspirators were promptly rounded up and executed.

The writing was on the wall for Wolf’s Lair after the assassination attempt. The headquarter’s had been compromised and Russian forces were beginning to move into Poland.

Within months the Nazis had abandoned the base, not before attempting to destroy all traces of it with dynamite.

Where is Wolf’s Lair?

A visit to Wolf’s Lair provides a chilling insight into the German war machine. You do have to use your imagination to visualize the base as it was however.

The Nazis were extremely good at blowing up their former military buildings in order to prevent the enemy from gain. Out of the 80 buildings that once made up Wolf’s Lair, over 90% sustained explosive damage.

That doesn’t mean that there’s nothing to see mind you. The vast bunkers were originally built with concrete walls 8m (26ft) thick. Despite repeated attempts, the SS was unable to demolish them completely.

Walking around the base today and you can still see many of the former structures, brutal concrete carcasses jutting out of the undergrowth and between trees.

Some have collapsed on their sides, the stone remnants covered in moss.

Other’s are more intact and actually have roofs. Health and safety are thin on the ground and you can even walk inside them.

A haunting area of the site is the remnants of the Situation Conferences Barrack. This is where the attempt on Hitler’s life took place.

There are very few structural elements left, however, a plaque in memorial of Stauffenberg and the 20 July plot has been built onto the spot where the bomb went off.

It is impossible not to feel the weight of the events that took place, and think “what if” it had been successful.

Hitler’s Personal Bunker can also be found. It is one of the biggest in the complex and is still relatively intact. There is nothing much to see inside, yet knowing this was where Hitler rested during his time at Wolf’s Lair is eerie in itself.

After the war, locals plundered the ruins which is another reason there is little to see beyond the broken structures.

Information boards are sparse and unless you book a guide you will not find much explanation in English. Efforts are being made to make Wolf’s Lair more visitor-friendly mind you.

There are plans to launch a free app that uses GPS to guide tourists around the complex, providing information on the various bunkers.

There is also one completely intact structure from the time of Hitler’s command. It is the former headquarters for Hitler’s personal security. Today it is a small hotel and restaurant and can be found on the outer edges of Wolf’s Lair.

Wolf’s Lair attracts upwards of 300,000 tourists visit each year. If you visit in the summer months you won’t be alone. The basic entrance fee is 15 zloty (£3.16; $4). You will also need to pay a small fee for parking.

In order to funnel tourists through the site, pathways have been constructed. Fencing also surrounds the complex in an attempt to put off after-hour urbex explorers.

Upon arrival, you can request a tour guide (several languages are available). These can be conducted either on foot or (much more interesting) from the inside of an authentic WW2 jeep.