The House of Terror in Budapest got its name for a very good reason.

Located at 60 Andrassy Boulevard, the Hungarian Nazi party claimed the building as its headquarters after taking control of Budapest in 1944.

It is here that they administered their particular brand of brutal terror on the local population. Decisions with wide implications were made, citizens were brought there to be tortured and killed.

Known as the Arrow Cross Party (NYKP), this local fascist organization mercifully did not hang around for long, (the defeat of Hitler’s Germany was not far away).

However, the Nazis were replaced with another tyrannical power; the Soviets.

For the remainder of the communist rule in Hungary, the House of Terror struck fear in the minds of the Hungarian public.

That is why the building is now a museum dedicated to the memory of those that suffered and to remind future generations of the atrocities that took place.

History of the House of Terror 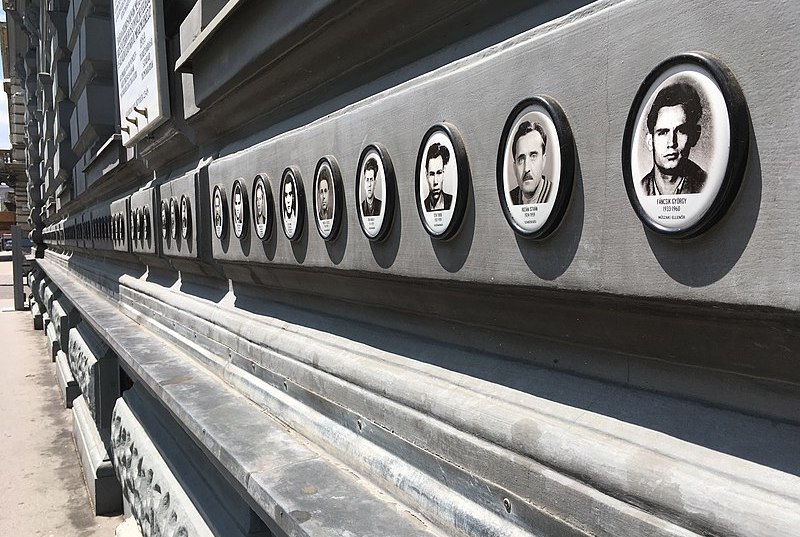 For the few short months that No 60 served as the Arrowcross HQ, hundreds of “dissidents” were tortured and murdered in the basement.

In a similar vein to Hitler’s methods, those that did not follow party rule, or happened to be born with the wrong genetic code, risked ending up dead.

After WW2 Hungary became a client state of the Soviet Union. The Soviet State Protection Authority (AVH) simply took over where the Nazis left off. The brutality continued inside No 60, only now under a different ideological regime.

Anyone that was caught speaking out against the communist party risked a stay at the House of Terror. And the Secret Police had the means to reach into all areas of a person’s private and public life. If they had you in their sights, the future did not look good.

Few that were arrested and incarcerated within the House of Terror made it out alive.

Creation of the Museum

Plans to turn the building into a museum stalled for many years. In the aftermath of the end of communism, Hungarians understandably wanted to move on. Remembering the somewhat painful, recent past was not a priority.

However, by the early 2000s, a renovation project was underway. The center-right government of Viktor Orbán agreed to sell the building to the Public Foundation for the Research of Central and East European History and Society.

From the outset, the aim was to commemorate these two dark, bloody periods of Hungarian history.

Construction work lasted for a year, with a new internal design (the building had been used as general office space for over a decade) that sought to recreate the conditions victims of political repression would have experienced.

To this end, the architects attempted to restore the building back to its bleak origins. Adding to the gloominess, composer Ákos Kovács created a morose background score that is played throughout the museum.

Other redesign work included the incorporation of the main exhibition hall. There is also an inner courtyard that is large enough to house an original T-54 tank.

The exterior of the building was also reconstructed. As a result No 60 now looks like a monument more than anything else.

The black structure with decorative entablature and granite footpath is extremely imposing and effective. You cannot miss the museum as it stands out against the other buildings on Andrássy Avenue.

On 24 February 2002, the museum was finally opened to the public, with tens of thousands of Hungarians and foreign tourists visiting every year since.

House of Terror & Nearby Accommodation

Inside the House of Terror Museum Today

Over four floors, the museum tells the comprehensive story of the Nazi and Communist rule

The displays are vivid and informative, providing not just a visual experience but a distinct emotional one too. Photographs, historical mementos, and video are all used to great effect.

Visitors are presented with a detailed overview of life in Budapest during the period of the two regimes.

The most harrowing section of the museum is the basement. Here the House of Terror building cellars remain as they were when citizens were brought there for questioning.

The fact so many individuals were tortured and killed within these rooms evokes a gut-wrenching response.

An effective slow elevator ride down into the bowels of the building only adds to the sense of foreboding. It is not something you forget in a hurry.

Essentially 60 Andrassy Boulevard is a very well thought out and executed monument and museum to all that suffered during some of the darkest days of the 20th Century in Hungary.

It is a must-see visit for dark tourists in Budapest.