Nestled in the harsh, icy midst of Svalbard, above Norway’s arctic circle, is a remote abandoned ghost town like no other.

To walk among the empty streets of Pyramiden is to step back in time.

This former mining town permeates with communist architecture, politics, and culture; a Soviet foothold in the west that once acted as a symbol of all that was great about the USSR.

The vista is truly breathtaking. 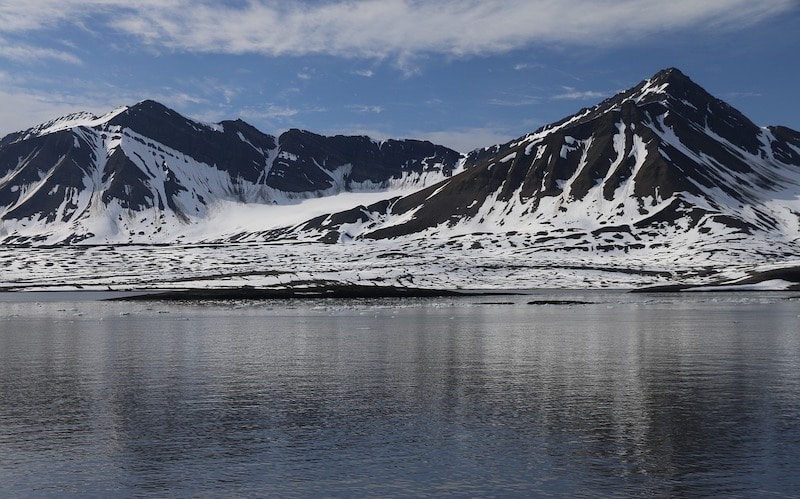 Humanity, albeit in small numbers, first became interested in Svalbard in the 17th century. The Arctic islands were used sporadically by whaling and walrus hunters venturing further north for their quarry.

However, by the beginning of the 20th Century, the interest had turned to coal. Up until then, various nations had used the archipelago with no official claim to sovereignty.

This changed in 1920 after Norway, the United States and Great Britain, created the Svalbard Treaty. The land was deemed to belong to Norway. (Much to the chagrin of Russia who had been left out of talks due to its ongoing civil war).

After the dust had settled, the newly formed Soviet Union approached Norway, with proposals to develop commercial pursuits on Svalbard.

However, it wasn’t until 1936 that the Soviets acquired the rights to use the coalfields at Pyramiden. Soon after, the outpost was transformed.

For the next 70 years, a community of hard-working (and assumingly cold-loving) Soviets worked the mines on behalf of Trust Arktikugol, the company created by the state to oversee the venture.

Apartment blocks, a hospital, a recreational center (named in typical communist grandeur, the Cultural Palace) were all built, and to high standards too.

The sense of community was strong. The living quarters did not have kitchens, so mealtimes were held in a large cafeteria, complete with a floor-to-ceiling mosaic of the epic Svalbard landscape.

While a posting at Pyramiden may have seemed like a punishment to some, the reality (from a communist perspective) was very different.

As the USSR’s only settlement in the West, Pyramiden was designed as a communist showboat.

It was intended to be a perfect paradigm for its anti-capitalist ideology. The living standards were far higher than elsewhere in the Soviet Union.

The Cultural Palace had a well-stocked library, basketball courts, and a gym. It also featured a large auditorium for amateur dramatics, music, and movies.

For the children, there was an indoor and outdoor playground; a soccer field was installed for use during the summer months. Pyramiden’s heated indoor pool was apparently the best in Svalbard.

And of course, the hardworking miners and technicians needed a place to drink their vodka.

This came in the form of the ‘bottle house’ that stands to this day; its interior is lined with over 5,000 empty glass bottles. Only the best were recruited to work at Pyramiden. To make it there was to have won the communist jackpot.

End of an Era

Beneath its heavily subsidized existence, all was not good with Pyramiden. The coal mines were never profitable.

After the Soviet Union collapsed in 1991 there was no reason to keep the place running as an ideological beacon to the west. Funding from the Motherland dried up.

This, in turn, brought in the reality of shortages, low salaries, and poor living standards.

To further compound the feeling that Pyramiden was in a state of terminal decline, disaster struck.

In 1996 an airplane charted by Arktikugol crashed on its approach to the Svalbard airport. All 141 passengers aboard were killed, many of which lived and worked on Pyramiden.

The community never recovered. After the decision not to excavate a deeper layer of coal was made in 1997, Arktikugol officially declared that the mines would be closing for good.

The last coal was extracted on March 31, 1998. The remaining 300 workers began shipping out.

Around half chose to stay in Svalbard and to work at another mine in Barentsburg, (also owned by Arktikugol). The rest left the company and returned to Russia.

In a matter of months, the place was unceremoniously abandoned. 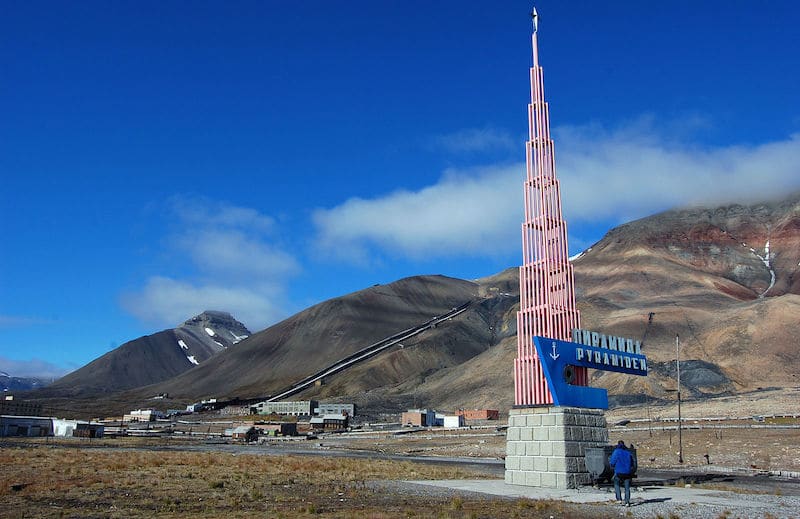 Little has changed since those last workers boarded the boats back in 1998. Over the intervening 20+ years, the buildings and much of the belongings that were left behind have remained untouched.

Cups still sit on tables, posters peel off walls, and worker’s skis line empty corridors. Hulking machinery stands as it was the day the power was switched off.

Pyramiden is a ghostly echo from the past, a time capsule of a lost Soviet industrial way of life.

As National Geographic states, it is one of the “World’s 10 Best Ghost Towns.”

Not only that, due to the arctic conditions it is estimated that Pyramiden will stand as it is for another 500 years or more. Its remains will outlive any other modern human settlement on Earth.

Pyramiden is open to the public via organized trips.

Arriving by ship (see details below) you will be led by a gun-toting guide employed to scare off any polar bears feeling hungry, bold or both.

Very little of the site is off-limits, and day tours are the standard way of seeing the town. That being said, overnight is possible in the summer months.

Since 2013, the very authentic Pyramiden Hotel can provide you with accommodation. You can also pick up some of the locally brewed beer from Barentsburg on tap in the hotel bar.

(Remember to bring cash (NOK), as they don’t take credit card payments. There’s no wifi or cell phone reception either.)

SAS flies to Longyearbyen several times per week from Oslo in summer. They also operate a year-round daily flight from Tromso.

From Longyearbyen, the easiest way to visit Pyramiden is by boat on an organized day tour. Several companies offer these (I recommend Polar Charter and Hurtigruten) and they cost in the region of $250.

The ghost town is accessible via the water from about mid-May until the beginning of October. After that sea ice will block your way. Expect the tour to take around 8 to 10 hours, but allow for some flexibility on your days as weather conditions can cause delays or cancelations.

If you fancy an overnight stay on Pyramiden, Terra Polaris can organize that for you. You’ll need to book well in advance as the numbers are clearly limited.