The Aral Sea was once the fourth-largest lake in the world. As recently as 1960 this vast inland sea situated on the border between Uzbekistan and Kazakhstan, had a thriving fishing industry supplying the Soviet Union with a sixth of its catch.

It provided employment for over 40,000 people and was ringed with prosperous towns, one of them being the Uzbek port town of Moynaq.

Just 60 years later, what was once a body of water larger than Sri Lanka has shrunk to less than half the size of the Falklands. The receding waters have left behind a desert of toxic soil and dust.

Moynaq now rests more than 150km from the water’s edge. It takes an off-road vehicle to reach the Aral Sea from the town, the entire distance you are traveling along what used to be, the bottom of the sea.

How did it happen?

Soviet engineers are to blame for the collapse of the Aral ecosystem. The draining of the sea was a man-made disaster.

In an attempt to kick-start a cotton industry in the surrounding steppes, the engineers diverted two of Central Asia’s mightiest rivers, the Amu Darya and the Syr Darya, away from the Aral Sea.

A total of 20,000 miles of canals, 45 dams, and more than 80 reservoirs were built. However, the construction projects were crudely executed, were not totally waterproof and as a result, extremely inefficient.

The rivers were sucked dry by the time they reached the Aral Sea, reduced to little more than a trickle.

In the decades that followed the ‘blooming of the Steppes,’ the Sea receded into a series of small lakes.

The combined volume became one-tenth of the original lake’s size. The extreme evaporation also meant that the water had a much higher salinity. It became uninhabitable for large swathes of marine life.

Millions of fish died. People living in coastal towns such as Moynaq found themselves miles from the sea, their traditional livelihood destroyed by the ecological disaster the Soviets had engineered.

To add insult to injury, the people that remained were plagued by dust storms containing the toxic residue of industrial agriculture and weapons testing.

The Uzbek town of Muynak

The Uzbek town of Muynak is a dark tourist destination for the intrepid traveler only. It is not easy to get to.

The once-thriving fishing port provides an almost post-apocalyptic experience. Everywhere you go are sad reminders of the town’s history and its connection to the Aral Sea that is no longer anywhere near.

The entrance to the town displays an emblem containing a fish; a monument of a fishing boat on a pedestal sits in front of government house, and landmarks featuring nautical murals, mosaics and signs can be found decaying along the streets.

There is also a stone pyramid in Moynaq that marks where the waterside used to be. Empty fish processing factories dot the landscape on the edge of town.

A poignant (and easily the most well know) indication of the town’s former status is the abandoned fishing fleet of Moynaq.

This ‘cemetery of ships’ is a series of rusted hulks jutting out from the desert sand.

How to get to Muynak

Public buses depart twice a day from Nukus. These take three to four hours and cost around 13,000 Som (just under $15). If you are traveling from the nearer Kungirot the cost is approximately 7,000 Som. There are no stops along the way so ensure you’ve had a toilet break before hopping on the bus. Bring food and water too.

The town can be comfortably visited as a day trip from Nukus with your own transport. (It is possible to rent a car from global providers such as Sixt within larger Uzbek cities such as Tashkent and Samarkand depending on your itinerary.)

There’s also a number of guided tours with transport that will take you to Muynak from Nukus, (see below)

Reaching the Aral Sea from Muynak

Being such a small town there’s little in the way of local tours that will take you from Muynak to the edge of the Aral Sea.

If you don’t have your own transport, it is highly recommended that you pre-book an organized tour that will take you to the various sites associated with the Aral Sea tragedy.

2-Day Adventure Tour to the Aral Sea (From Nukus) 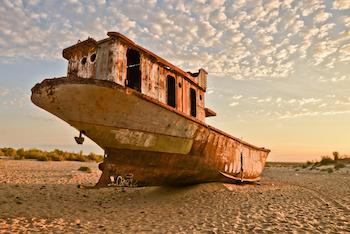 One of the best-organized trips to the Aral Sea from Nukus is this 2-day adventure offering from Uzbek-Travel.com.

They pack a lot of excellent sites into the itinerary. You’ll travel to Moynaq of course and see the ship graveyard and other local points of interest.

You’ll drive over the dried seabed of the Aral and witness firsthand the surreal landscape resulting from the disaster.

The overnight stay provides a sample of the nomadic way of life as you stay in a traditional Yurt.

You’ll also visit the mysterious Ustyurt Plateau and Sudochie Lakes, the latter being the most ecologically intact zones of the Amudariya river delta.

For a local take on the tragedy, the Museum of the Aral Sea in Muynak is definitely worth visiting.

Among the exhibits are pictures of marine painters who painted the Aral in its former glory, there’s also samples of plants and animals that once thrived in the area.

An interesting section displays the items associated with the everyday life of peoples living on the Aral Sea coast.

The region has very little rain all year round. The result is a dusty, arid atmosphere. If you visit in the summer, be warned, the temperatures hang in the 40s. Sandstorms are also common.

Visit in the winter and you’ll need to pack your warmers, the mercury can drop as low as –C40. Autumn or spring are the best times to come.