I love a good road trip. On one of my travels, I drove from London to Mongolia in a Fiat, I have checked out the entire east coast of Australia over 6 months living out the back of a Holden Commodore and I have recently crisscrossed 23 American States in a borrowed, beat-up ’92 Dodge Caravan.

These were great adventures, however, there is one route that has a firm place on my bucket list: The Road of Bones in Russia.

This has to be one of the most epically, bleak road trips anyone can ever hope to take.

Officially known as the R504 Kolyma Highway, this enormous road stretches for 1,262 miles (2,031 km) through the Russian Far East. Considered by some, and not unfairly, as beyond the edge of the world.

The endpoints of the road are Nizhny Bestyakh to the west and Magadan, infamous for its Soviet gulags to the east.

And how did it come by the name “Road of Bones”? A simple, tragic truth. It is estimated that over 250,000 people died during its construction, their bodies unceremoniously laid beneath or around the road as the workers soldiered on.

Construction of the Kolymá Highway 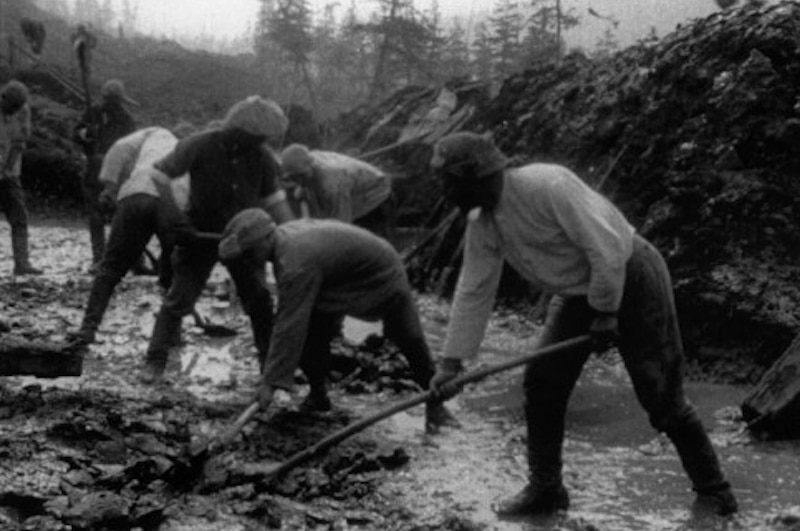 The road gets its official name because it passes through the region of Kolymá. The territory is best known for the many Gulags that were built there.

Thousands of zeks (political prisoners) were sent to Kolymá. One of the motives being the rich deposits of gold and minerals located there.

However, despite the fact Stalin had been using forced gulag labor in the area since 1929, the only possible year-round access was via boat from Khabarovsk.

This was cumbersome and unreliable. In an effort to speed up production, a road was required along with more workers.

A total of 80 concentration camps were built in the Kolymá region to meet the demand. Led by the Latvian Eduard Berzin, an officer of the Cheka Political Police, a great purge was conducted across the entire Soviet Union to build and fill the gulags.

In 1932 the construction of the city of Magadán and the Kolymá highway finally began. The cheapest way to do this of course was by the use of prisoners.

Death on the Road of Bones

It is said that the Kolymá highway cost one death for every meter of road built. Conditions were horrific.

The prisoners had little more than shovels and wheelbarrows to build over 1,000 miles of road in some of the harshest terrains on earth outside of the poles.

The grueling work was undertaken in all weathers. In winter, temperatures could drop to minus 50 degrees, in summer the mosquitoes could drive you insane. On top of this were the hunger and brutality.

In the majority of cases, prisoners worked until they literally dropped dead. And when this happened the sentries did not order for the bodies to be buried. Corpses were simply left inside the foundations of the road. Flesh made for good mortar, bones were a handy substitute for stone.

To traverse the Road of Bones today is to travel a mass grave of many thousands of corpses.

Where is the Kolymá Highway 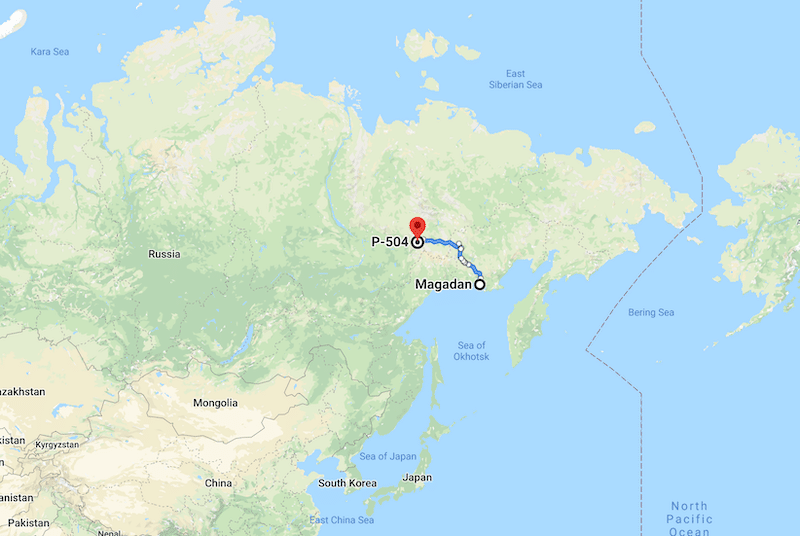 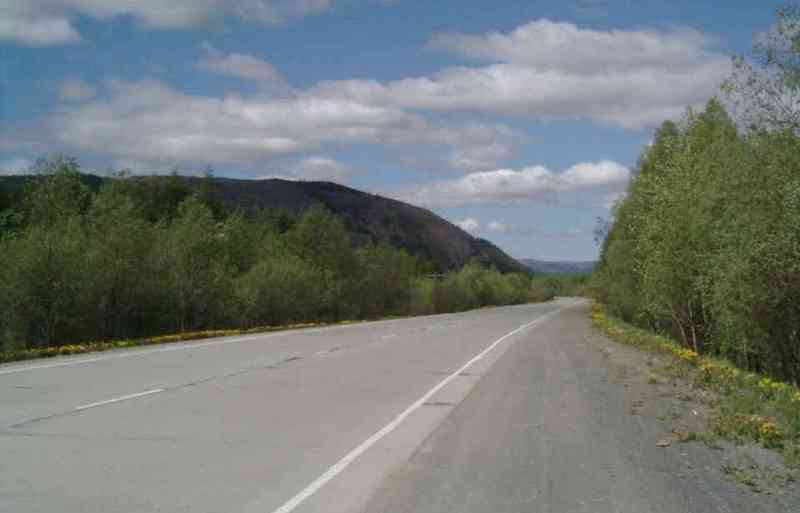 Traveling the Road of Bones is not for the faint-hearted. For most of the year, the route is covered by snow or mud and is considered one of the most dangerous roads in the world.

It is also incredibly remote. Locals call the road ‘Trassa’ (“The Route”) as no other road exists in the region.

In fact, it is worth knowing that the safest time to tackle the Kolymá highway is during the winter.

Armed with sufficient supplies and equipment to withstand the cold, the route is at least firm and more predictable in the freezing months.

In spring, the melting snow fills the road with mud and debris from the ice-flows. The formally frozen rivers are also more difficult to pass.

To add to the dangers there is also the threat of hungry bears and ticks; the latter which transmit encephalitis, a particularly debilitating ailment you do not want in such depopulated areas.

But do not let all of this put you off, it only adds to the adventure.

Must-see Sights along the Road of Bones

The best way to drive the road of bones is to fly into Magadan and make that your starting point.

Motorcycle or 4×4 is the only way you are really going to make the entire journey and these can be rented in Magadan. Organized tours along the Kolymá highway also start from here.

If you are arranging the road trip yourself, there are some essential pitstops that should form part of your itinerary. They are as follows:

About 300km west of Magadan is the abandoned Dneprovskiy Gulag. This is one of the most intact Gulags in Siberia due to the fact the Soviets attempted to destroy all existing remains of other camps before the fall of the Union.

As you arrive in the Dneprovskiy region you will need to take a small track leading off the highway to the right.

Travel this for approximately 20km and you will arrive at the ghostly carcass of the former gulag concentration camp.

Isolated deep in the taiga forest the site has not been touched by any kind of tourism authority.

What you see is how the gulag looked 80 years ago, only weathered by time and the elements.

You will be able to explore the camp completely alone. Be sure to check out the old watchtowers and mines on the perimeter of the main camp complex.

Further west along the Road of Bones you will find Yagodnoye. From 1949 until 1957, the town was the administrative center of the nearby SevLag forced labor camp.

There is a Kolyma Rememberance museum located here that must be visited. With the sights of Dneprovskiy Gulag fresh in your mind, you will surely be affected.

The museum contains thousands of photographs of former prisoners. Artifacts from the camps are on display as are the work tools and objects that once belonged to the incarcerated.

The coal-mining community of Kadykchan was founded during World War Two. However, the depleted deposits led to the town being abandoned in the early 2000s.

This is an extraordinary ghost town that you should definitely check out. Devoid of human life the town is being taken over by the enveloping Taiga forest.

Dilapidated blocks of flats with broken windows and doors still contain furniture that once belonged to the former inhabitants. Old cars rust along deserted streets.

The town is like a scene from a post-apocalyptic zombie movie. Riveting and creepy in equal measures, especially when you stop to consider that you are probably the only human around for several hundred miles.

Oymyakon – The Coldest Settlement on Earth

Further along on the Kolymá highway, you will reach Oymyakon; often referred to as “The Pole of Cold”.

In this village of indigenous Yakuts and Evenki, (the only peoples that can physically withstand the intense cold) the coldest temperature in any settlement on earth was recorded: -71.2C.

Stop by, just to say you have visited the coldest village on earth.

There are no landmarks along this section of the highway as such, however, you will be awestruck by the spectacular scenery.

This part of the Road of Bones features pristine lakes with the backdrop of forest and mountain.

In some places, the road has simply been etched out of the mountain rock, affording incredible views across the valley.

The drive from Khandyga to Yakutsk will involve two river crossings; the Aldan and the Lena.

This is done via regular transit ferries. Organizing boarding permission on these with the local captains is an adventure in itself. But the services are regular so no need to book in advance.

The region is one of the world’s biggest producers of diamonds, (it also exports large amounts of gold, oil, and gas) so expect to see trucks loaded with expensive cargo as you travel this section of the road.

Spend some time in Yakutsk once you reach the city as there is a number of things to do here.

It also represents the end of the journey for most travelers. The airport is relatively well connected (there are regular direct flights to Moscow) and the endpoint of the Road of Bones is at nearby Nizhny Bestyakh.

For all intense and purposes, you have completed the route once you reach the city.

The Old Summer Road – For the Intrepid

For lovers of high adventure (and are confident with either the 4×4 or off-road motorbike), The Old Summer Road section needs to be traversed when taking the Road of Bones.

It involves a slight detour, however. After the Russian government upgraded part of the Kolyma Highway in 2008, they bypassed a 200km sector between Tomtor and Kadykchan.

This section (called the Old Summer Road) has now been left to the Siberian wilderness for over a decade. With collapsed bridges, often flooded roads, and deserted settlements along the route you really are at the mercy of fate when you take it. Good luck if you try.