Despite its remote location in the Pacific, Tinian is slowly becoming more popular with tourists, especially dark ones that are interested in Pacific WWII History.

There are a number of reasons why. Not only did the island become one of the largest allied airbases in WWII (the whole island was overrun by the US military after the Battle of Tinian in 1944), it was also the launching point for the “Enola Gay” and “Bockscar” B-29 bombers for the attack on Hiroshima and Nagasaki.

Today, almost all of the former airbase is abandoned, however, visitors can see the exact spot the bombers were loaded with their deadly cargo, scuba dive bays filled with discarded WWII machinery, and enjoy some of the wonders of the island that existed before Europeans set foot in the pacific in the form of prehistoric taga stones.

So if you are up for a dark tourist trip to Tinian, let’s get started with a bit of history…

After realizing the strategic importance of Tinian to the American entry into WWII, the Japanese scrambled to create a military force on the island.

However, despite the fact an 8,500-man Japanese garrison was posted there, the Battle of Tinian (from 24 July to 1 August 1944) was a massive defeat for the Japanese. Only 313 survived the fighting, while the allies seized the island with very few casualties.

An estimated 15,700 Japanese civilians were also living on the island at the time of the battle. Hundreds died in the crossfire, while hundreds more were executed by the Japanese military so that the Americans could not capture them.

It was a bloody, brutal battle for the Japanese and the civilian population, a small sign of what was to come once the allies had got a foothold in the Pacific, (the atomic bomb would soon follow).

Construction of the Airbase

True to the Japanese fear of strategic importance, the US immediately began constructing an airbase on the island. Located 1,500 miles (2,400 kilometers) from mainland Japan, Tinian was perfect for long-range bombing attacks.

The base was massive and incorporated the entire island with a 40,000-personnel installation. It was so huge in fact that the military laid it out in a pattern of streets similar to Manhatten, with the streets named accordingly. A slice of home for the Americans posted there.

Two runways West Field and North Field were constructed to accommodate the flow of aircraft flying in and out from combat and reconnaissance missions or delivering supplies.

North field was eventually used for missions to mainland Japan and the subsequent dropping of the two atomic bombs, Little Boy and Fat Man.

Today what was once part of West Field is Tinian International Airport. The runways at North Field, meanwhile, are overgrown and abandoned except for a few former airbase buildings and the Atom Bomb Loading Pits, (more on these below). 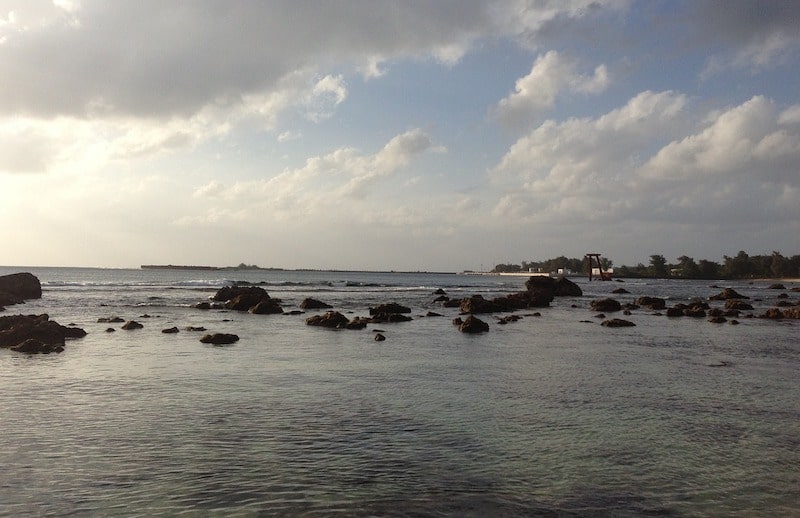 After the war, the island became part of the Trust Territory of the Pacific Islands. This was controlled by the United States and a significant military presence remained there.

However, as economic ties with Japan increased during the second half of the 20th century, the pacific threat was greatly reduced.

From 1978, the island came under the municipality of the Commonwealth of the Northern Mariana Islands.

The US military presence amounted to the use of just one runway during the 1980s. North Field continued to be used for U.S. Marine Corps training exercises.

By the 1990s, the US military had all but gone and the island began developing its tourist trade.

Where is Tinian Island?

As already mentioned, Tinian is an essential stop for anyone traveling around the pacific islands in pursuit of WWII history. It really is packed with it.

Here are some of the highlights of a trip to Tinian, both from a military tourism perspective and general enjoyment of what is a beautiful part of the world.

The abandoned runways at North Field are a must-see while in Tinian. Plaques and displays mark the atomic bomb pits where the Enola Gay and Bockscar planes were loaded before heading to Hiroshima and Nagasaki with their devastating cargo.

There’s also remains of the actual airbase and of course, the massive network of concrete runways, albeit overgrown, still exists.

A tour will also take you to some of the Japanese fortifications that were built before the allied takeover at the Battle of Tinian.

Driving down semi-empty “New York City” streets such as Broadway, 42nd Street, Lenox Avenue, Riverside Drive, and Eighth Avenue is quite a surreal experience in this remote part of the Pacific.

Scuba diving the pacific waters is beautiful whichever island you happen to be on. However, on Tinian, it is all the more dramatic for the items you will find.

A place called Dump Cove is a favorite for tourists; here planes, tanks, ammunition, and jeeps all lay under the water. A mecca of submerged WWII machinery second only to the larger stash at the Ghost Fleet of Truk Lagoon.

For other types of recreational diving, there’s the popular cave dive at Tinian Grotto.

3,000 years ago, Chamorro King Taga built an ancient palace on the island. All that exists of that now are the prehistoric taga stones used for the construction. That being said, visiting the site of the stones and where the palace once stood is a popular tourist attraction while on Tinian.

There’s also interesting evidence of the Japanese existence on the island in the form of the Shinto shrines, and old ruins that can be found off the beaten track (a guide is required) in Tinian’s jungles and caves.

There is also the Blowhole. Exactly as it sounds, this natural monument regularly shoots 10-meter columns of water into the air.

How to get to Tinian? 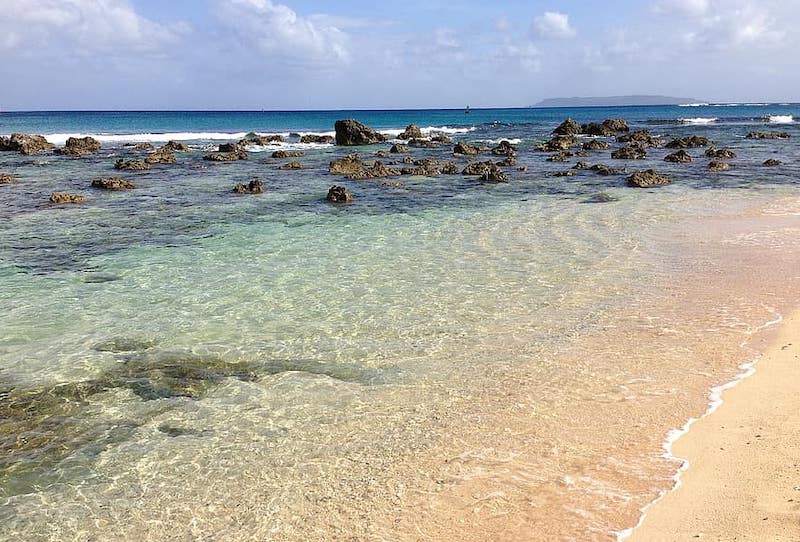 Getting to Tinian is not a simple affair. In fact, for many tourists, a visit to the island often forms part of a larger itinerary that involves other pacific islands and landmarks.

Nearby Saipan is better serviced by international airlines, with direct flights from Tokyo or Osaka. A short flight of ferry journey will then take you to Tinian.

Guam is another “hub” relatively close by. US airlines operate to Guam from Hawaii and Japan. Again, transit then needs to be organized to Tinian.

The Tinian Casino and Hotel is the best option for those looking for a level of luxury. In recent years, local owners have been opening up their homes using Airbnb and Booking.com.