The Eagle’s Nest (also known as the Kehlsteinhausis) is a popular destination for tourists, dark or otherwise.

Some will visit for the incredible views and the love of hiking. Others will make the trip because of its association with Hitler and the Third Reich.

Erected atop the summit of the Kehlstein, a dramatic rocky peak that rises above the Obersalzberg in Germany, the Eagle’s Nest is a building that was once used by the leaders of the Nazi Party. The top brass would head there for meetings and social gatherings.

History of the Eagle’s Nest 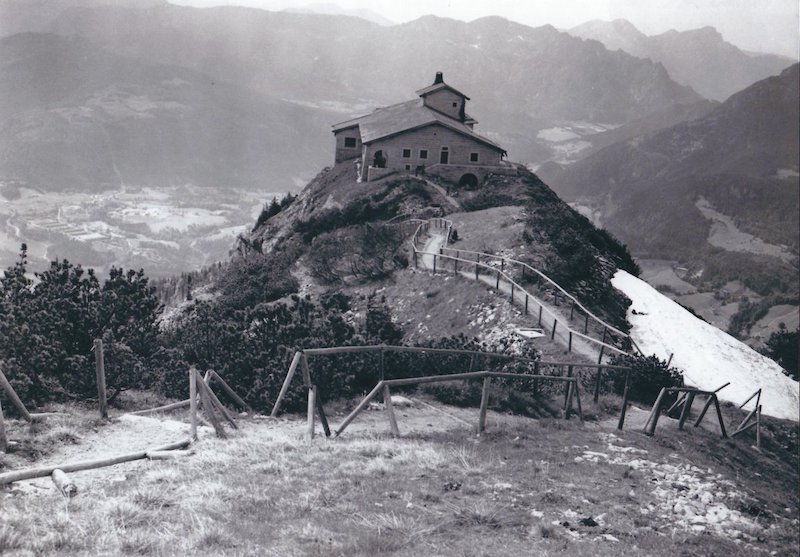 Situated near the town of Berchtesgaden, the Eagle’s Nest was commissioned and paid for by the Nazi Party in 1937. Twelve workers died during the thirteen-month construction due to the hazardous working environment on the mountain ridge.

Upon arrival at the Eagle’s Nest, visitors would have to walk along a tunnel into the ridge, before ascending an elevator for a final 124m (407ft) to reach the building.

Apparently Hitler hated this, (he only visited the Eagle’s Nest a reported 14 times). He was paranoid that the elevator would fail if the winch mechanism on the roof was ever struck by lightning. He also disliked the thin mountain air.

That being said, the Führer did consider the venue to be a worthwhile location for meeting foreign dignitaries and special occasions.

He received the departing French ambassador André François-Poncet there on October 18, 1938. A wedding reception for Eva Braun’s sister Gretl was also held at the Eagle’s Nest.

Inside the Eagle’s Nest

It is easy to see why Hitler considered the property excellent for entertaining important guests. The opulence is evident as soon as you walk into the elevator to the main building. The inside is surfaced with polished brass, Venetian mirrors, and lush green leather.

Arrival into the main reception and you are greeted by a fireplace of red Italian marble. Presented as a gift by Italian dictator Benito Mussolini, it dominates the entire room.

A visit today and you can still see the damage done by allied troops after the building was captured. They chipped the marble for take-home souvenirs.

The guest rooms and dining area were equally as impressive with commissioned works by leading artists of the day. Furniture throughout was designed by Paul László.

The building also had heated floors and a completely electric kitchen, both of which were unusual for the time.

And then there are the views. The large windows and orientation of the rooms provide stunning vistas throughout. Any guest would have been suitably impressed.

Where is the Eagle’s Nest?

Public transport is reliable and frequent. Two public buses will get you to Berchtesgaden. A shuttle bus (more on this below) will then take you up to the Kehlsteinhaus.

It is also possible to book accommodation in Berchtesgaden, however, the options are far fewer. 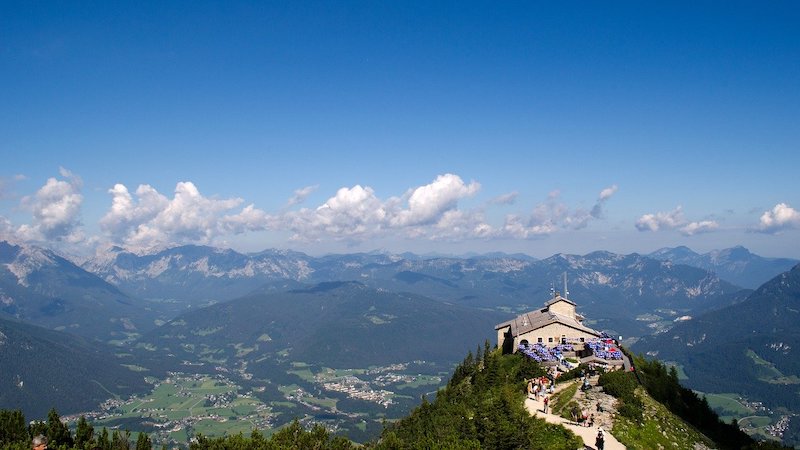 A charitable trust owns the Eagle’s Nest today and the building is open to tourists. It serves as a restaurant and also has an outdoor beer garden with plenty of lovely German beverages on tap.

Because the building is so closely associated with the Third Reich, the current owners have been very sensitive in limiting the historical context.

As such, no information about the building’s Nazi past is on display. Informal tours can be booked through the official website, however, in an effort to discourage neo-Nazis and post-war Nazi sympathizers, external guides are not allowed.

Photographs and information along the wall of the sun terrace document the construction of the building.

Evidence of the allied troops on the fireplace in the reception is also worth checking out. You will also find graffiti by the troops etched into the woodwork of the window frames on the lower rooms of the building.

Hitler’s small study still exists but is off-limits to the public. It is now a storeroom for the cafeteria.

The road up to the Eagle’s Nest has been closed to private vehicles since 1952. So you can stop any thoughts of a self-drive to the top, it is actually too dangerous for normal vehicles.

There are two ways of reaching the building once you are at the Documentation Center in Obersalzberg.

Those up for a hike can take the two-hour mountain trek. A more popular approach is the shuttle bus.

The coach station is part of the Documentation Center and is where tickets for the bus are purchased. The same tickets act as an entry pass as the bus drops you off at the Eagle Nest elevator.

The angle of ascent is so tight, the bus axles have been specially modified to cope.