Port Royal, Jamaica was once known as “the most wicked and sinful city in the world”. Founded in 1494 by the Spanish, the enclave positioned on the mouth of what is now called Kingston Harbour, was the center of shipping and commerce in the Caribbean Sea during the 16th and 17th centuries.

And of course, where there was commerce in the Caribbean, pirates were not far behind.

Port Royal became infamous for the lawlessness of its shores, with rum-drunk sailors, raiding pirates, and prostitutes aplenty.

It all came to an abrupt end on 7 June 1692 however. The town was wiped out by an earthquake and an ensuing tsunami.

Now a relative ghost town, Port Royal is open to tours where you can see remnants of its “illustrious” past both on the shore and under the sea.

The History of Port Royal 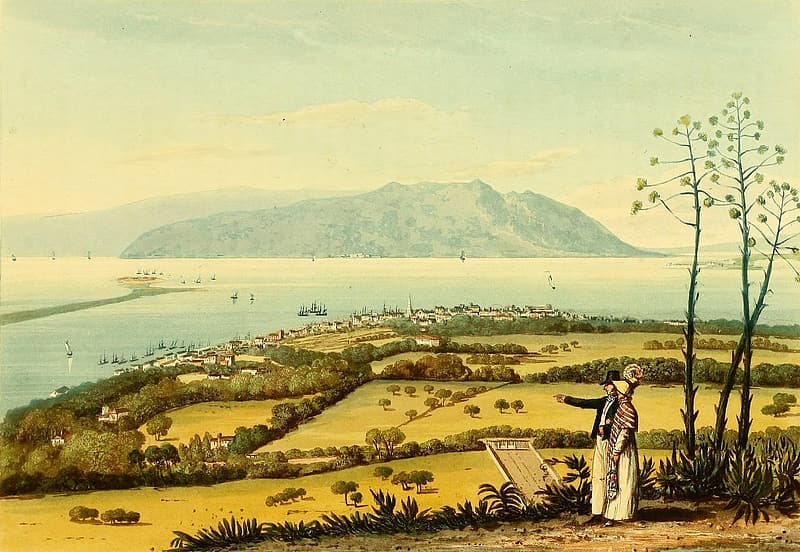 He and his crew didn’t stick around, however. There were many more islands to claim during that now very famous voyage.

Lacking gold or other resources of interest the Spanish did not prioritize Jamaica. By 1655 it was under English rule.

Oliver Cromwell had sanctioned an invasion and capture of the Spanish stronghold at Hispaniola, a much more strategically important area at the center of the Caribbean trade.

The English failed and took control of Jamaica as a consolation prize.

The new custodians of Jamaica didn’t dally mind you. The natural harbor at Port Royal quickly blossomed and became the center of English trade in the area.

By the late 1600s, Port Royal was the second-largest European city in the new world, (Boston was number one). It was also one of the most debauched.

Far from home, the criminal-minded and the desperate made nefarious new lives in Port Royal. Much could be made living off of the slave trade, plantations, and sailing the seas, looting from the Spanish.

The city provided a safe harbor for pirates attacking the shipping lanes to and from Spain and Panama. It was large enough to moor for periods of rest and repair work in between raids.

Furthermore, the port was very close to what was only a handful of safe passages with access to the Spanish Main from the Atlantic.

For these reasons, the infrastructure (and entertainment) at Port Royal grew to cater specifically for pirates. In this guise, it had a reputation as the “Sodom of the New World”.

The taverns were a place of wild alcoholic reverie, fighting, and illicit sex. Even the animals would get involved. As famous Dutch explorer Jan van Riebeeck said in his writings:

“The parrots of Port Royal gather to drink from the large stocks of ale with just as much alacrity as the drunks that frequent the taverns that serve it.”

At the height of Port Royal’s popularity with marauding pirates, the city had one drinking house for every 10 residents.

The English authorities tolerated the criminality due to the lack of sufficient troops. They couldn’t control the pirates and they also needed them to defend the city against the Spanish or French.

Not everyone was a freebooter or sex worker, however. The bustling commercial center had a permanent population of 6,500 by 1692, and this included artisans, merchants, goldsmiths, and a total of 44 tavern keepers.

End of an Era

In 1675 the notorious pirate Henry Morgan became Lieutenant Governor of the city and, ironically things began to change for the better.

Pirates were no longer needed to defend the city and the slave trade was becoming more and more profitable.

Morgan took a tighter stance on the more overt piracy still taking place. However, the pirating heyday was finally over in 1687, after Jamaica passed anti-piracy laws.

Instead of being a safe port for pirates, Port Royal was now a place of execution. The infamous Gallows Point saw the end to a series of well-known “buccaneers”, including Charles Vane, John “Calico Jack” Rackham, and female pirate Mary Read.

“The earth opened and swallowed many people, before my face, and the sea I saw came mounting in over the wall, upon which I concluded it impossible to escape.”

These were the words written by Edmund Heath, a survivor, and eyewitness to the devastating earthquake that ripped through Port Royal in 1692, (he was writing a letter from the safety of his ship moored in the city’s harbor).

Port Royal existed on a sub-surface of sand. As a result, instant liquefaction took place with many of the city’s buildings and its unfortunate citizens sucked into the ground.

This was followed by geysers erupting from the earth and if that wasn’t enough, the resulting tsunami waves destroyed what remained and dragged the rest out to sea.

Of those that survived, many turned to immediate looting (an indication of the caliber of citizen). One eye-witness account stated:

“Immediately upon the cessation of the extremity of the earthquake, your heart would abhor hearing of the depredations, robberies, and violence that were in an instant committed upon the place by the vilest and basest of the people; no man could call anything his own, for they that were the strongest and most wicked seized what they pleased….”

Not that looting would do any good for the survivors. With the city in ruins (and littered with the dead), accommodation, clean water, and medication were in extremely short supply. Many died in the weeks after the earthquake due to malignant fevers.

The news spread fast of the destruction of Port Royal and it was often seen as God’s Providence. The catastrophe was simply divine retribution for the human filth that had proliferated the city.

Like cockroaches, the pirates and the slave traders soon returned to a rebuilt Port Royal.

Throughout the early 18th century life of vice and criminality remained the general prerequisite for citizenship, with the anti-piracy laws tested to their limits to keep the marauders in check.

However, natural disasters were never too far away. Early rebuilding work was hampered by a 1703 fire that surged through the city. Flooding caused further setbacks in 1722.

Multiple hurricanes also caused their fair share of destruction during the 18th century, with another fire in 1750 causing yet more damage to Port Royal.

In the midst of these unfortunate series of events, Kingston began to eclipse Port Royal as a commercial center.

An epidemic of cholera tore through the community in 1850, signifying the end of the city as a commercial hub.

Today, Port Royal is known to scholars as to the “City that Sank” and archaeological diving has been going on since the 1950s, with the most significant find occurring in 1969.

Edwin Link discovered a pocket watch dating from 1686. The clock had stopped at exactly 11:43, providing historians the precise time that the earthquake devastated the town.

Efforts made by the Nautical Archaeology Program at Texas A&M University and the Jamaica National Heritage Trust have also shed light on what the town was like in the 17th century.

The program focused on submerged areas that had suffered very little damage due to the low oxygen levels of the water.

So much has remained intact, the site has been compared to Pompeii for its archaeological wonders. The discoveries that include everyday artifacts and the way buildings were arranged and constructed have allowed scientists to reconstruct colonial port city life in great detail.

Where is Port Royal?

Today, Port Royal is a shadow of its former self. The population is less than 2,000 and what is now merely a village has no commercial significance.

The touristic opportunity for the area is great, however. There is a dark mysteriousness attached to just how much of the 17th century lies under the water.

Up until the 1900s visitors could see large sections of the city still visible beneath the waves. Now, boat tours and diving trips can bring you face to face with some of the hidden wonders.

Above ground, you can wander the quiet streets and enjoy the slower pace of life when compared to the busy capital, Kingston.

Here are just some of the highlights of a stay in Port Royal:

Fort Charles is the most accessible main attraction at Port Royal. It dates back to the 17th century and a small entrance fee of $15USD will grant you access to the fort and the various exhibitions showcasing artifacts from the town’s history.

Walking around the fort is to go back in time with narrow cobblestone corridors, fortification structures, lookouts, and cannons.

There are also items recovered from the earthquake in varying conditions due to laying on the seafloor for centuries.

Diving parts of the city (that are not restricted due to archaeological importance) and the many shipwrecks off the coast is an experience like no other.

With an estimated 70% of Port Royal under the sea, there is no shortage of dive spots.

These can be booked online before you arrive or through one of the few dive operators working in the area.

A famous landmark in Port Royal is the “Giddy House”, one of the buildings to survive the 1907 earthquake and is now partly submerged in the sand.

It used to be the Artillery store connected to Fort Charles but is now a tourist attraction due to the fact it has sunk into the earth at a severe angle.

The reason for the name is clear; once you step inside and walk around you begin to feel disoriented and giddy.

The old jail and naval hospital are definitely worth a visit while in Port Royal. The navy hospital is also of interest for being one of the oldest prefabricated buildings in the world. The inner ironworks were constructed in Bradford, England, before being shipped out to the Caribbean in the 18th century.

Another of the rare buildings that still exist from the time Port Royal was a bustling pirate city is St Peter’s Church. You’ll find this down aptly named Church Street and dates back to 1725. The courtyard also contains various historical relics of interest.