To stand in the Kaya Valley region of Turkey, amongst the ruins of Kayaköy is an eerie experience.

The stone buildings of this once-bustling town stand empty, after being abandoned abruptly in 1922. The citizens fell victim to the purges that took place shortly after WW1 with the collapse of the Ottoman Empire.

Over 10,000 people once lived here. All that’s left now are hundreds of roofless homes dotted along the hillside and a couple of long deserted churches.

The Mediterranean sea glistens at the bottom of the valley, a tranquil sight juxtaposed against the stone desolation of Kayaköy.

So how did it come to be? Why did the people of Kayaköy flee their ancestral homes?

The short answer is religion and war.

The vast majority of the population (of what was then called Levissi) was Greek Orthodox. They had lived in the area since the 14th century.

However, after WW1 and the subsequent Greco-Turkish War, hundreds of thousands of Greeks fled the violence taking place in Turkey.

So much so, the respective governments agreed on a mutual population exchange. The Turks purged all Ottoman Greeks from its land, while the Greek authorities sent all its Muslim residents to Turkey.

The arrangement meant that the residents of Kayaköy had to leave everything behind and were exiled to Greece. In their place came the Muslims, who soon found that the Kaya Valley was unsuitable for their agricultural needs.

Levissi became known as Kayakoy, or Rock Village as a result and remained abandoned as this new population resettled in other areas of Turkey.

Hiking from Fethiye is a wonderful option if you have the legs for it (and traveling out of season). An 8-km long cobbled, medieval path takes you through the forest with wonderful views of the valley at times. Allow 3 hours for the walk.

The streets of the ghost village can be difficult to walk along if you have mobility issues. Sturdy shoes are advised, and if visiting in the summer, bring sun cream and water. 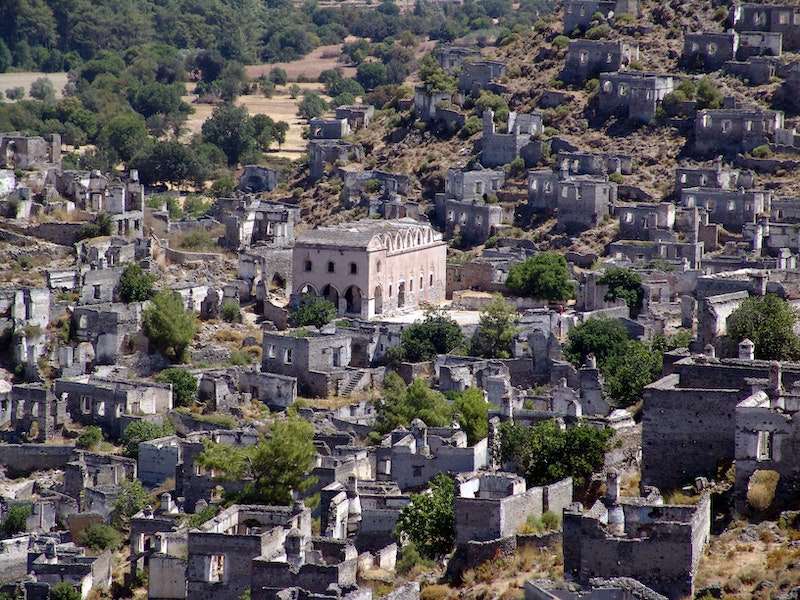 The hillside of Kayaköy remains deserted to this day. The town as it was in the early 1920s exists today in a dilapidated state due to almost 100 years of exposure to the elements and looting.

Beyond the homes and churches, shops, cafes, and the local school still stand, these crumbling structures a reminder of the once-bustling community.

Development is not permitted in the area, as the Turkish Ministry of Culture has granted the town museum status.

This makes it a must-see location for dark tourists in Turkey. You can literally walk amongst the ruins, entering the homes of people long since dead.

In the dusty, weed-strewn streets you can still find the broken fountains and cisterns that once watered the city.

The remains of the Kato Panagia, the town’s Lower Church is an especially poignant experience.

One can imagine the church’s former glory. Faded frescoes adorn the walls, the vaulted ceilings evoke the lost grandeur. You almost hear the ghost-echoes of residents that would have once held prayer there or celebrated weddings and christenings as well as the somber tone of funerals.

Walking through Kayaköy with a little imagination you can picture the community before everyone fled. It is an experience that will stay with you.

The nearest airport to Kayaköy is Dalaman Airport, which is located 60km northwest of the town.

The best place to find accommodation during your stay is in Hisaronu and Oludeniz (the former is larger and more vibrant at night). Both towns have an abundance of Airbnb apartments, hotels, and hostels.

It is also possible to find accommodation right next to the abandoned town. The Misafir Evi is located on the valley floor beneath Kayakoy and has nine double rooms available.

There are also a few restaurants in the inhabited area close to Kayakoy, the Levissi Garden being the best as it has excellent food, views of the ghost town, and even offers a shuttle service to and from local hotels.

On the subject of transport, minibusses from Fethiye, Ölüdeniz, and Hisaronu run to the abandoned town every 30 to 60 minutes (depending on the season).

Because of the hot climate, the best time to travel to Kayaköy is in the spring or autumn.

There is a private museum near the entrance to the abandoned area of town, with information on the history of Kayaköy and its subsequent fate.

Admission to the village is five Turkish Lira, with the ticket booth situated by the Lower Church.