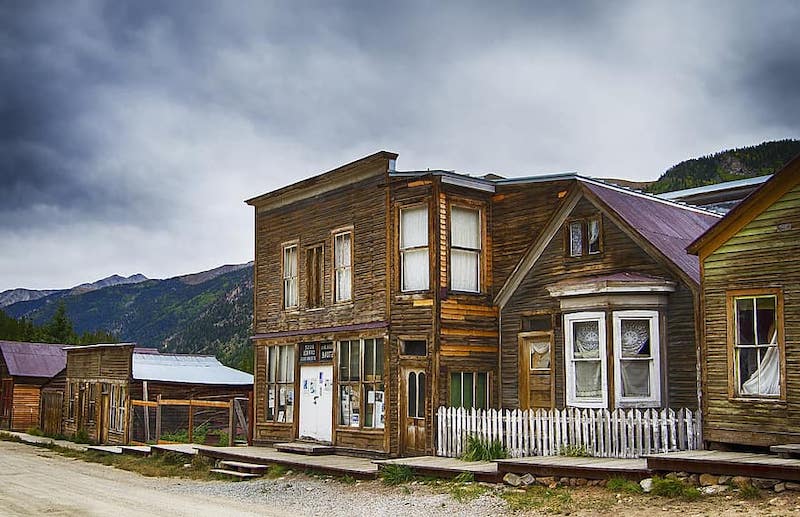 St. Elmo, is currently the best-preserved ghost town in Colorado. This former gold mining camp in Chaffee County lies in the heart of the Sawatch Range.

The entire district was placed on the National Register of Historic Places in 1979, and it has been popular with tourists traveling in this part of the world for decades.

As with all good ghost towns, a trip here is to go back in time. Transporting visitors to the late 19th century, many of the buildings are just as they were when the town was founded in 1880.

You can almost smell the horse dung… 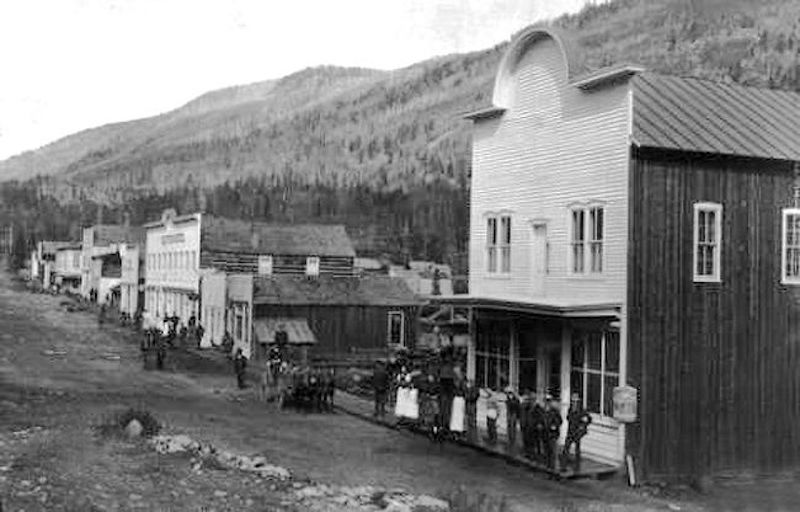 Nearly 2,000 people settled in the town after prospectors discovered nearby gold and silver deposits.

Originally called Forest City, the name changed to St. Elmo in order for the town not to be confused with other settlements of the same name.

One of the founding fathers, Griffith Evans chose St. Elmos because he was reading a book with that title at the time.

The town reached its peak population level in the 1890s. Gold and silver mining was proving extremely lucrative, (there were a total of 150 patented mine claims within the area) and St. Elmo had all the local infrastructure required of a bustling mining settlement.

These included a telegraph office, general stores, hotels, various saloons, a town hall, and a dancing hall. It even had its own local newspaper called the Mountaineer.

Transport connections were improved after The Denver, South Park and Pacific Railroad line was extended to run through St. Elmo.

The line also continued on towards the famous Alpine Tunnel. The construction of which led to a population increase in St. Elmo, and injected much frivolity into the Saturday night scene with saloons and whore houses opened up to accommodate the influx of male workers.

The most successful mine in the area was Mary Murphey. This recovered a staggering $60,000,000 worth of gold while it was in operation, and ran right up until the railroad was abandoned in 1922.

The closure of the railway in the district was a result of the declining prosperity of the mines around St. Elmo. The lack of work caused a population exodus. It has been said that those left in the town took the last train out and never returned.

Shortly afterward, the community was so small St. Elmo was considered a ghost town.

The Stark Family of St. Elmo

One family that stuck around despite the declining fortunes of St. Elmo was the Starks. A wealthy family during the heyday of the town, after everyone left, they could not bear to do the same.

Led by patriarch Anton “Tony” Stark, and his son Roy, the family tried in vain to get developers to reinvest in St. Elmos and re-open the mines.

After it became clear this would not happen, the family turned to tourism to make money and to encourage visitors to the now-empty town.

Together, the Starks ran the fledgling tourist business and by now had bought up much of the property at tax sales prices.

It was a lonely existence. By 1930, the population of the town sat at a mere 7 people. This number was further depleted In 1934 after Roy Stark passed away. His mother dying a year later.

In the intervening years, the few remaining residents had left too, leaving Tony and his daughter Annabelle to live in the dead town completely alone.

Without plumbing or electricity, the couple lived an “eccentric” life, rarely bathing or changing clothes. The hotel that they owned was left to rot, piling up with trash and unfit for tourists.

Annabel was said to roam the empty streets with a loaded rifle hung over her shoulder.

They did continue to run the general store, however, according to reports, it smelt horrible and was full of outdated food and withering items.

The couple quietly goes off the “record” sometime in the late 1940s, assumingly dying and being buried in the ghost town they had spent most of their lives.

Where is St. Elmo?

Take Highway 24 south from Buena Vista. Then take County Road 162 after passing Nathrop. Follow this for 19 miles until you reach St Elmo.

Look out for Mt Princeton Hot Springs on the route. There is also the very pretty Agnes Vaille Falls. If you have time take the short waterfall hike to see this up close.

Today, St. Elmo is popular with tourists from all over America. The former mining roads are used as off-road vehicle trails; quality hiking and fishing is also a big draw to the area.

The Stark family general store has been revamped and is open during the summer to cater to the influx of tourists.

Many of the buildings have been restored to their former glory (with the Buena Vista Heritage fund making efforts to rebuild those that require attention).

The town hall and a few other buildings were destroyed by fire in 2002, however, these too should be rebuilt in the coming years.

Cabin rental is available in St Elmo providing no-frills, authentic accommodation. There is also the Ghost Town Guest House, a bed and breakfast open year-round for those looking for a bit more comfort.

One trip to make outside the town is some of the abandoned mines. The ruins of the largest mine, Mary Murphey are accessible, however, anyone doing so enters at their own risk.

A 4×4 vehicle is required to get you to the mine entrance. A good day trip would also take in Tincup Pass and onwards to explore Pitkin. (Bear in mind that there is no camping on Co Rd 162).