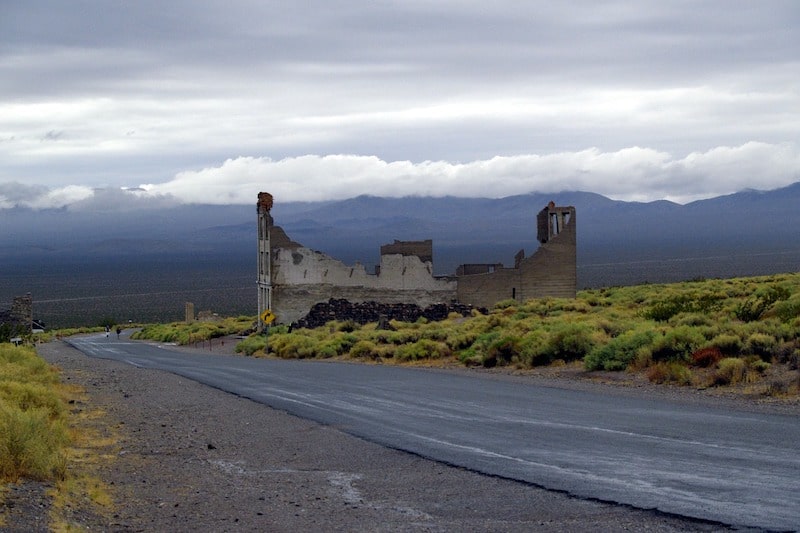 Founded in 1904, Rhyolite was once a booming late Gold Rush-era mining town on the edge of Death Valley.

People flocked there in the promise of finding gold. Within a few short years, Rhyolite was a bustling mini-metropolis, with two electric plants a hospital, hotels, stores a large school for 250 children, and a red light district with women that had come as far as San Francisco to accommodate the miners.

At its peak, the population was estimated to be between 8,000 and 12,000 people, making it one of the largest desert gold towns of its day.

However, within 6 years, except for a few resilient families, the town would be all but abandoned.

By the spring of 1905, three-stage lines brought supplies to Rhyolite a fact that exacerbated the speedy rise of the settlement as a bustling town.

Soon after came the railroads. During the peak mining years between 1905 and 1907, the town was served by three lines, shuttling both people, gold, and supplies along with the wider network of the US rail system.

Some impressive buildings were also built, including a 3 story tall bank (at a cost of $90,000), a large train station, and premises to run a stock exchange and a Board of Trade.

All in the town had forty-five saloons, dance halls, an opera house, slaughterhouse, 3 swimming pools, and countless residential buildings.

More than eighty-five mining companies were active in the hills around the city. To say it was a hive of activity would be an understatement.

To keep it all running day and night, Rhyolite had 400 electric streetlights installed that worked 24 hours a day, signifying the optimistic, cutting edge nature of the town.

However, the heyday of Rhyolite was alarmingly short-lived. The US financial markets faltered in 1907, which in turn rocked the flow of investment cash into the mining industry.

Banks and businesses closed, and with most of the investment money coming from mining headquarters based in the east, the supply to Rhyolite quickly dried up.

It was a situation the community could not recover from. A year later the mine closed, and from that point onwards any train leaving the town was full of people that would never return.

By the end of 1909, the population dropped below 1,000. Those that remained, stayed in the hope that a new boom would one day return.

It didn’t. By 1916 the electrical company pulled the plug and all but a handful of people finally moved on.

Those few that remained lived a very lonely existence among the ruins of what was once a town of several thousand. In 1920, a survey recorded just 14 people living in Rhyolite. The last resident died 4 years later in 1924.

Where is Rhyolite Ghost Town?

If traveling to Rhyolite from Death Valley, turn east off Hwy 190 around 19 miles north of Furnace Creek. This will take you onto Daylight Pass Road, which you need to take for approx 20 miles. Rhyolite will be signposted once you are passed the Nevada border.

If heading to Rhyolite from Beatty, Nevada, Take Hwy. 374 West about 4 miles. You will soon see the entrance to Rhyolite Road on your right. Continue along until you reach the center of the town.

Rhyolite is free to enter, and fully administered by the BLM. Be warned, it gets very hot in summer so bring water with you. There are no facilities in the ghost town.

Rhyolite is an essential visit for any dark tourist that likes their ghost towns. The abandoned buildings within the town are extremely evocative. The bleak, time travel experience of walking around Rhyolite is hard to beat.

Full of crumbling remains against a stark backdrop of desert hills provides quality photographic opportunities at every turn.

In fact, the town has what is said to be the most photographed ruin in Nevada, the 3 stories Cook Bank.

Here are a few of the highlights of a trip to Rhyolite Ghost Town.

The Las Vegas and Tonopah Railroad began servicing Rhyolite in 1906. No expense was spared on the building of the train station. At a cost of $130,000, the Spanish-style construction would have certainly impressed new arrivals to the town.

This is one of the more intact ruins in the town today, (although it remains fenced off to tourists wanting to get inside).

In the 1930s, the old depot became a casino and bar, servicing the first arrival of tourists to the ghost town.

It also enjoyed use as a small museum and souvenir shop. These closed in the 1970s, with the station building being empty ever since.

The Porter Brothers Store once sold mining supplies, food, and bedding. Designed with large windows on the facade, (so passers-by could see what items were for sale), this was the largest general store in the town.

The Porter Brothers were known for providing such services in mining towns. They also had stores in the nearby towns of Ballarat, Beatty, and Pioneer.

The Rhyolite store closed along with almost everything else in 1910. However, one of the brothers did stay on. H.D. Porter became the local postmaster and didn’t leave until 1919.

The remains of the school are in fact from the second school that was built in Rhyolite. Costing $20,000 in 1909, like the station it has Spanish influenced architecture, including a Spanish tile roof and bell tower.

Today the roof has disappeared, but the exterior walls still stand.

Look out for the smaller ruin of the former Overbury building nearby. This used to be a substantial, three-floor structure used for offices.

Australian Tom Kelly built his Rhyolite bottle house in 1906. His choice of material was due to the fact he started building his home before the railroads began providing a steady flow of supplies.

Unable to afford normal building materials (and find wood which was scarce), Kelly used adobe mud to hold together the 30,000 glass bottles.

His three-room, L-shaped home became his castle and would be the largest of three such houses in town that were built at that time.

The bottle house has been well preserved due to continuing spells of reconstruction over more than 100 years. A significant landmark in Rhyolite, the last effort to keep it intact was carried out in 2005.

Look out for glass bottles from a company named Adolphus Busch. They would later become Budweiser. 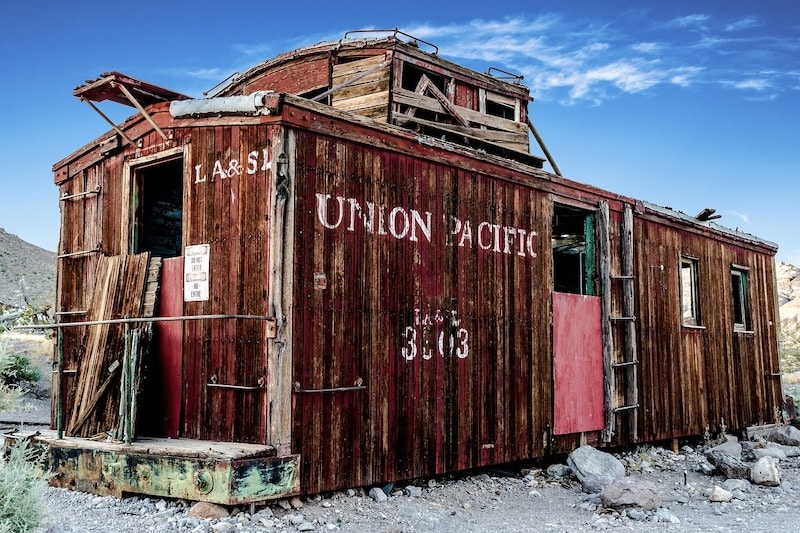 Bottle houses were not only the makeshift attempt to create a home during the early days of the Rhyolite gold rush.

With building materials hard to come by, some resourceful individuals actually used disused cabooses as their homes.

These were a common sight across America’s Old West, and Rhyolite has one relatively intact today, just across from the Rhyolite train station.

This old Union Pacific caboose was later used as a gas station once the tourists started to venture to Rhyolite in the 1930s.

The aforementioned Cook Bank is another well-known landmark in Rhyolite. Being the tallest building within the town during its heyday, it once sported elaborate internal design.

However, it met a similar fate as the other businesses in town, shutting its doors after just 3 years of use in 1910.

Today, it remains quite a sight. The jagged, dilapidated walls, collapsed upper floors, and sections that reach the full 3 stories without floors or ceilings, indicate how imposing the building would have once been among such smaller dwellings.

The Goldwell Open Air Museum is another must-see while in Rhyolite. The first open-air installation was unveiled in 1984. Belgian artist Albert Szukalski took it upon himself to sculpt ghostly, life-sized forms close to Rhyolite’s abandoned railroad station.

The artwork was created by draping plaster-soaked burlap over live models. They then had to stand there until the plaster was dry and hard enough to support itself.

The arrangement is said to be influenced by The Last Supper by Leonardo da Vinci.

There is also the “Ghost Rider”, another work created by Szukalski. This shows a white and eerie figure mounting a bicycle.

Three other Belgian artists have also contributed to the museum. This includes the “Lady Desert: The Venus of Nevada”, by Hugo Heyrman, the “Tribute to Shorty Harris”, by Fred Bervoets, and a version of Icarus by Dre Peters.

The museum is a member of the Alliance of Artists Communities and is free to enter.