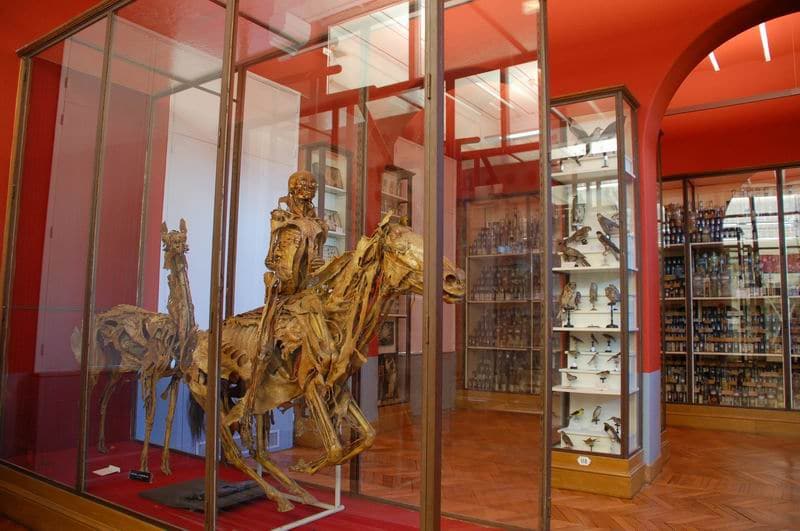 A dark tourist in Paris will usually check out the Catacombs. They are undoubtedly a popular site on the itinerary.

However, if you ask me, the Musee Fragonard d’Alfort is a must-see trip for those that like their macabre to be weird and wonderful. I actually prefer it to the underground warren of skulls, you’ll see fewer tourists that’s for sure.

And in many ways, the Musée Fragonard d’Alfort leaves a greater impact on the visitor. Founded in 1766 as a veterinary school, the museum has a private collection of corpse oddities that would put Ted Bundy to shame.

Inside the Musée Fragonard d’Alfort

A visit to the Musée Fragonard is a spectacle for the senses. How do human fetuses dancing a jig take you? (the arteries have been injected with wax in order to make them appropriately malleable).

You can also see inside the dissected body of a goat. Or admire the human head with its blood vessels injected with colored wax, the veins are blue and the arteries are red.

The show-stopper has to be the collection of écorchés, or “flayed figures,” created by Honoré Fragonard.

The skinless horsemen of the apocalypse riding a flayed horse-corpse (inspired by the famous Albrecht Dürer painting) take center stage. It is surrounded by a crowd of small human fetuses riding sheep and horse fetuses.

Fragonard had an unhealthy obsession with fetuses it seems. This stuff isn’t for the faint-hearted.

The Dark Mind of Honoré Fragonard

Louis XV appointed Honoré Fragonard as a professor at the first veterinary school in Lyon.

Given free reign, it was here that Fragonard began exploring his predilection for dead stuff. He perfected the art of skinning and preserving animals and, later, human corpses.

Initially, this was all under the pretense of creating educational tools for his students.

This turned into an obsession, however, as he began arranging his creations into theatrical poses, attempts at “art” and the formation of dark posthumous narratives.

Fired for being a Madman

Amazingly, Fragonard was able to work at the veterinary school in Lyon for a full six years before his superiors stepped in.

In 1771 he was dismissed from the institution under terms of insanity. His “work” was then packed and hidden away from the general public for over 200 years.

It wasn’t until the Paris Fragonard museum opened in 1991, that these morbid curiosities were made available for viewing once more.

However, even then only a small portion of his output has made it to the museum floor. Fragonard prepared over 700 works during his lifetime (he continued to create after being sacked from Lyon) and unfortunately only 21 pieces remain on display today.

Where is the Musée Fragonard d’Alfort

Take the Métro to École Veterinaire de Maisons- Alfoet and you’ll be a mere 2 minutes walk away from the museum.