If you happen to be taking a vacation on the Black Sea, or checking out Sochi, you might want to visit Stalin’s summer retreat.

The great tyrant’s dacha, Zelenaya Roscha, still stands very much as it was in the days he would head there for rest and recuperation in the first half of the 20th century.

Stalin associated sites are popular destinations for dark tourists and this one appeals for being one of the lesser-known ones.

The residence was a purpose-built second home, complete with palm trees imported from the Californian coast. As with many of Stalin’s dachas, it was designed by the eminent Russian architect Miron Merzhanov.

The “Father of Nations” vacationed at his Sochi based dacha every summer from 1936 until his death in 1953.

What to expect at the Dacha

To appease Stalin’s paranoia as well as his diminutive stature, the interior was actually designed so that the man would feel larger within his surroundings.

Most of the furniture, the height of the stair treads, even the depth of the pool was built to be undersized so that they could accommodate his 165cm frame.

A tour of the building allows tourists to see plenty of examples of this. Access is given to many of Stalin’s private rooms, where much of the said furniture still exists to this day.

One of the highlights of the museum is the movie theatre where Stalin would enjoy the latest releases from the USA.

Despite his hatred of the capitalist west, he was partial to Hollywood westerns and John Wayne in particular.

He would watch them repeatedly and even had one of his favorites “The Lost Patrol” by John Ford, remade in Russian (“The Thirteen” (1937) by Mikhail Romm).

These foreign movies were for private viewing of course, and not for the general public.

You can also venture into Stalin’s billiards room. Despite lacking in ability he loved to play. Only a fool would challenge him and win, however.

Security fit for a paranoid tyrant 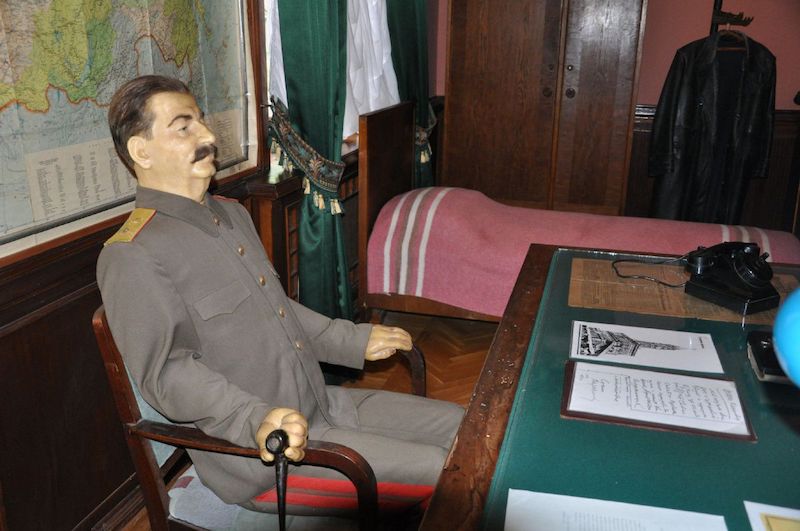 Security around the dacha was extremely robust. The man became increasingly paranoid during his tenure as a mass-murdering dictator and sensed threat everywhere.

He had guards positioned every 15m around the building, he ordered the entire exterior painted green so it would be camouflaged in the forest.

A secret lift was installed so that he could reach a tunnel that would lead down to the sea, should a rapid escape be necessary.

One of the highlights of the tour for any dark tourist is the chance to see the life-size waxwork of Stalin, sat at his desk, holding his favorite pipe. 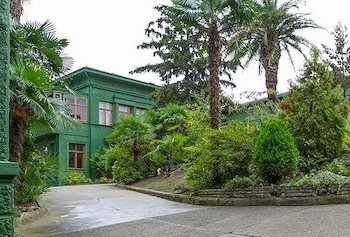 One of the best ways of getting an English speaking tour of Stalin’s dacha is to opt for a sights of Sochi tour.

Several sites associated with Stalin are covered in this tour, including of course the dacha. Priority access is given at the various locations, (so no queuing). Hotel transfers are also included.

The tour takes approximately 6hrs, and mobile tickets are provided after booking.

If you are traveling from Sochi, you can take any Adler-bound bus and get off at the Zelenaya Roscha stop, (just ask the driver to let you know when you have reached the stop).

This will bring you close to the gates of the Zelenaya Roscha sanitorium. Enter through the gates and walk approximately 1km uphill until you reach Stalin’s dacha.

Tours held by the museum are in Russian only, however, it is possible to organize a guide as part of a larger Sochi tour (see box above).