The luxurious Hotel Viru first opened its doors to tourists in Soviet-occupied Tallinn 1972. Run by the infamous Intourist agency (the government department founded by Stalin and partly run by the KGB), it was the only hotel in the city appropriate for foreign visitors to use.

During the Soviet occupation, Estonians joked that the Hotel Viru was made of micro concrete. They were referring to the number of microphones that were hidden in the walls.

Rumors abounded that the KGB had a presence there. After the fall of the Iron Curtain almost 20 years after the hotel began servicing international guests, the rumors were proved correct.

The top floor was a small KGB headquarters housing elaborate technical listening equipment. The hotel was riddled with cameras and microphones that the agency used to spy on anyone unfortunate enough to stay.

Today the Soviets are long gone of course. However, the current owners of the hotel have kept that once off-limits top floor as it was when the KGB was there.

Now it is a mini-museum, and visitors can take guided tours that provide insight into life under surveillance, within a regime hooked on espionage at whatever cost.

History of the Hotel Viru 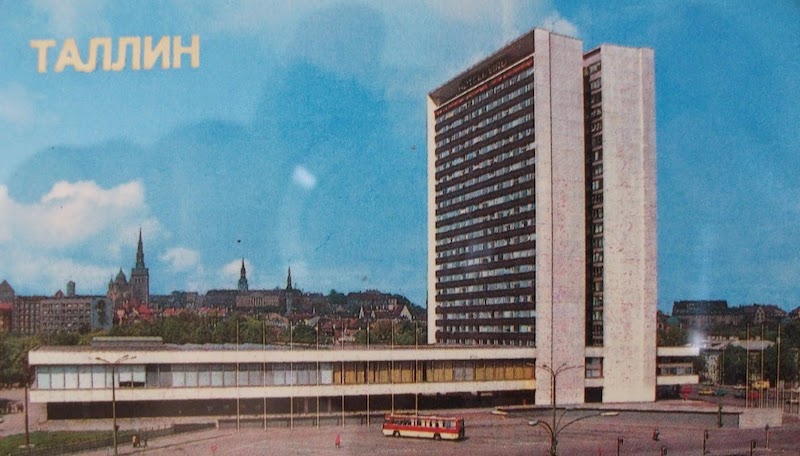 The Viru Hotel began construction as a prestige project for the Intourist agency. From the outset, it was designed for foreign travelers to Tallinn. It was supposed to show off the wealth and grandeur of the Soviet Union.

Ironically, this involved bringing in foreign builders and materials to construct the hotel. A Finnish construction company was charged with building Hotel Viru. They set to work in 1969.

Upon completion 3 years later, the building became a major landmark of Tallinn. It was the first high-rise building of this type in the Baltics. Intourist was justly proud. When it came to promoting the beauty of Tallinn, the Hotel Viru graced the front page of every brochure.

It didn’t take long for the sinister rumors to circulate, however. With the KGB closely connected to Intourist, and the fact foreign visitors stayed at the hotel, it seemed clear to the average Estonian that the building was bugged.

Officially the hotel only had 22 floors, however, those that worked there were aware of the 23rd floor. Today signs in the stairwell leading to the top floor state rather enigmatically: “Nothing Here”.

This is a rather tongue in cheek nod to the response given during Soviet times should anyone venture near.

It wasn’t until 1994 that the rumors were proved correct. After Estonian independence the truth about floor 23 became known to the wider public; it was a KGB surveillance control room all along.

Suffice to say, the hotel was literally packed with spying equipment. Cameras and microphones were hidden in most of the guest rooms, even tables in the restaurant had devices built into them.

The staff was also constantly spied on, (the hotel was considered a privileged place to work at as it provided an opportunity for getting hold of “valuta”, foreign currency), any inappropriate behavior or conversation could result in dismissal.

As a result, the majority of those that worked at the hotel were very tight-lipped about floor 23. They valued their jobs.

Where is the KGB Museum in Tallinn?

The museum is really more of a guided tour through sections of the Viru Hotel where the KGB used to operate its surveillance technology, (you do not need to be a guest of the hotel to enjoy the tour).

Information about the stay of important guests during Soviet rule adorns the walls of the corridors leading up to the top floor.

There are also panels and display cases containing photographs and Intourist brochures from the hotel’s heady days as a landmark in Tallinn.

After enjoying the views from some top floor balconies, the tour takes you into a small room that was once a KBG office.

Here a dummy KGB officer stands behind a desk. A phone with no dial (it would have had a direct link to the Moscow KGB headquarters) and some Soviet-era newspapers are placed in front of it.

After this, you are led into the main control room. Here the absurdity of Soviet surveillance and paranoia is very clear to see.

The room is packed with the types of spying equipment the Soviets used throughout the 20th Century. Racks of old electronics, telephones, tape recorders, and cameras are on display.

There’s also other interesting Cold-War-era paraphernalia such as uniforms, gas masks. The guide is most vocal here too, with a number of stories relating to the items in the room.

Despite being short, the tour is definitely worth it for any dark tourist in Tallinn.

Afterward be sure to sit and have a Russian spy-themed cocktail in Viru hotel’s “Valuta Baar”, (currency bar).

Refurbished in a similar style to its Soviet-era predecessor, you can almost imagine yourself as James Bond, deep behind enemy lines waiting to follow a Russian spy.