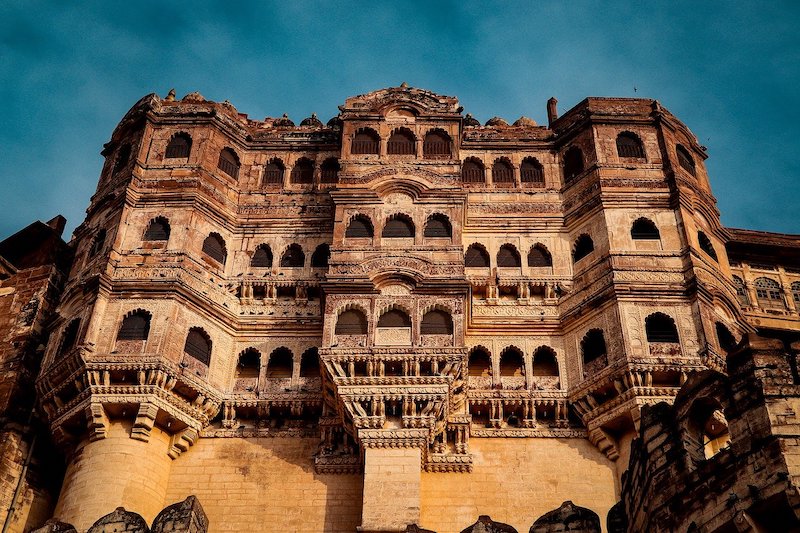 A must-see dark tourist site in Jodhpur has to be the grid of 31 sculpted hands at the entrance to Mehrangarh Fort.

Coated in ochre paint, many of the handprints are child size and they are all female. Each belonged to someone that sacrificed themselves to honor the death of their husband.

They would coat their hand in the paint, press it onto the wall and then commit suicide on the funeral pyre of their husband.

This was done to follow the Hindu rite of Sati. The women (often still in their early teens) had to self-immolate in order to prove their devotion to their dead partners.

The wife would cradle the body of the deceased from inside the pyre, and then both would be set alight. All in the name of honor and purity, for women who committed Sati, were said to have died chaste.

This meant a better time in the next life; karma would supposedly treat them well.

The History of Sati

Sati was first documented between 320 to 550 CE. This was during the rule of the Gupta Empire and recordings are limited to royal families. However, this could be down to the fact incidents of lower caste Sati were not deemed of note.

Sati in Nepal can be traced back to 464 CE. The ritual in Madhya Pradesh first appeared in 510 CE.

The practice spread to Rajasthan in the 10th century. Again, only higher caste families seemed to have followed the ritual, at first.

Unfortunately, things really started to kick off in the 15th century. Sati became widely practiced among all social classes and young widows were burning alive all over India and Nepal.

Say what you want about the British Empire in India, but one of the better things they did was to outlaw Sati in 1829, (even then, that’s 3 centuries worth of the practice at its peak).

This didn’t stop all incidents, however. In 1843, the wife and concubines of Jodhpur maharaja Man Singh threw themselves on his funeral pyre at Mehrangarh Fort.

Which brings us to the poignant memorial that you can visit today.

The Sati Handprints at Mehrangarh Fort

The beautiful, yet imposing Mehrangarh Fort is surrounded by seven gates. The Loha Pol, or “Iron Gate” is where the 15 wives of the maharaja left their handprints before they self-immolated.

The Sati stone was specially prepared so that the wives could leave their mark before death. They wished to be remembered as valiant and devotional wives.

They were dressed in their wedding finery as they climbed onto the funeral pyre. The devotion to their dead husband absolute.

Horrifically there is a recorded Sati incident as recent as 1987.

It occurred in the Rajasthani village of Deorala when an 18-year-old Roop Kanwar burned to death on the pyre of her husband. They had been married for just 8 months. Worse still, it is said that the ritual was watched by a crowd of thousands.

This led India to take strict action on the practice of Sati. The crime of encouraging anyone to take the rite is punishable by death or lifelong imprisonment.

Where is the Mehrangarh Fort 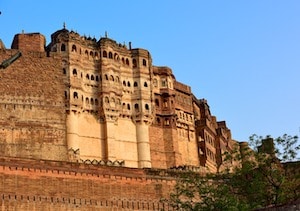 The current top-rated Viator guided private tour of Jodhpur, which includes the Mehrangarh Fort and the white-marble cenotaphs of Jaswant Thada, is this excellent offering.

The private guide nature of the tour may not appeal for some, however, I always enjoy the one-on-one thing. You learn so much more that way, and there can also be a level of spontaneity.

All the must see sights of Jodhpur are included. Be warned though, this is an 8hr tour so you need a full day for it. Traveler pickup is available.