The senseless murder of John Lennon on December 8, 1980, shocked the world.

Sporting events and television broadcasts were interrupted with special news bulletins, for those old enough to remember it, it was very much a case of where were you when John Lennon was killed.

His killer, Mark David Chapman was a life long Beatles fan. He was also, clearly, a deeply troubled man.

His love for the Beatles had turned into an obsession over the group’s most outspoken member.

Angry with Lennon’s lifestyle and public statements, such as his remark about the Beatles being “more popular than Jesus“, Chapman, a newly converted religious zealot, began to plot against the world-famous pop star.

He also knew exactly where to lurk in order to get close enough to carry out his plan. 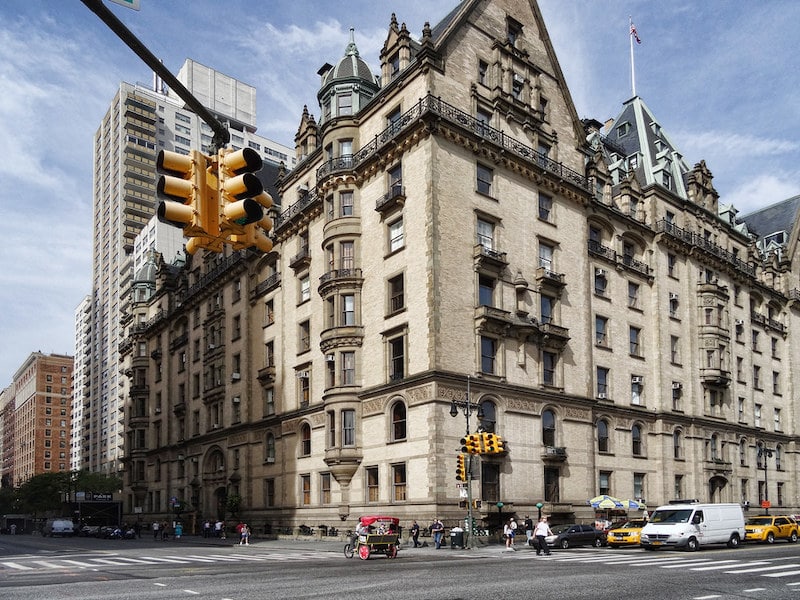 The musician was one of the more approachable celebrities of the time. He never discouraged fans from attempting to talk to him, and he had very little in the way of personal security.

Autograph hunters could loiter outside the Dakota Building, Lennon’s home in Manhattan, and have a very good chance of meeting him.

The entrance to the grand apartment complex on West 72nd Street was where fans would wait. Whenever he could, Lennon would take time to sign autographs and pose for a photo.

When Chapman approached John Lennon and his wife Yoko Ono on that cold December evening, he raised no suspicions at all.

Little did the couple know that the man was carrying a Charter Arms snub-nosed .38 Special, under his jacket, and that he fully intended to use it.

Adding dramatic poignancy to the crime is the fact Chapman had met Lennon just a few hours before the murder.

He had arrived outside the Dakota building earlier that day and had managed to accost Lennon as he was leaving his home for a recording session at Record Plant Studios.

Chapman had asked if he’d signed a copy of the Double Fantasy LP for him.

The former Beatle had been so pleasant, that Chapman dithered and didn’t pull out his gun. The encounter — so close and personal — had stopped him in his tracks.

The moment is actually immortalized in an image taken by amateur photographer Paul Goresh (see right).

Goresh was standing close by and took a picture as Lennon signed the album.

Chapman was resolute in his plan to kill John Lennon. He made sure that death would be the ultimate outcome when he purchased hollow-point bullets for his Charter Arms handgun.

This devastating type of bullet is used for its accuracy and the fact it explodes on impact. The damage caused when hitting soft tissue and organs is indescribable.

John Lennon did not stand a chance considering the range at which Chapman intended to pull the trigger.

Later that same evening, Lennon and Yoko Ono returned to the Dakota Building and this time Chapman didn’t hesitate.

The killer made eye contact with his target, took a few steps towards him, and pulled the trigger without a word.

Chapman shot five times. Lennon was struck twice in the lower back and twice in the left shoulder area, the 5th shot missed him entirely. 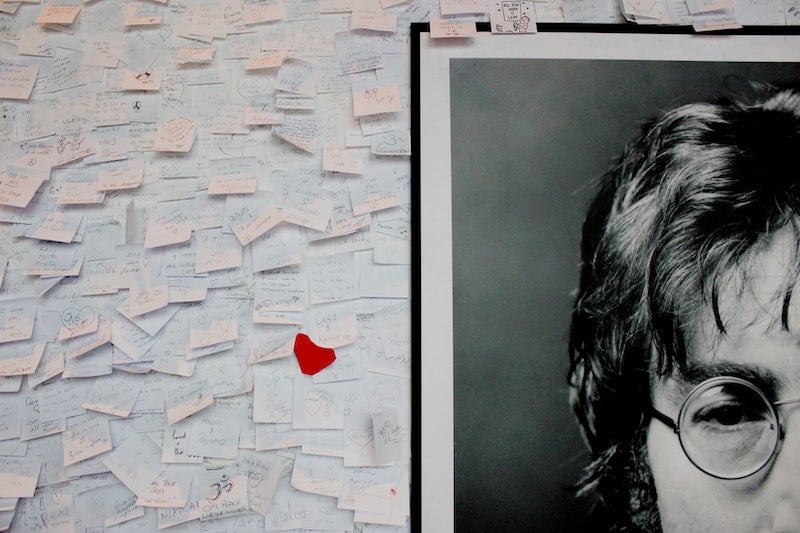 It is commonly believed that Lennon’s last words were “I’m Shot!”, uttered as he staggered into the security office within the entrance of the Dakota building.

(A more fanciful story has the star uttering the word “yeah” as he was rushed to Roosevelt Hospital by the two policemen that were first at the scene. Apparently he was answering the question; “Are you John Lennon?”)

The reality is that John Lennon (mercifully for him considering his wounds) had lost consciousness long before he was placed face down in the back of a police car.

After collapsing in the security office, Lennon was attended to by doorman Jay Hastings. The guard removed the man’s famous round glasses, (they had been smashed against his face as he fell) and began looking for the source of the bleeding in order to tie it off.

According to Hastings, Lennon vomited up a “bloody, fleshy mass”, before passing out.

Upon hearing the police sirens, Hastings rushed out and was immediately restrained by the officers who thought that he was the killer, he was covered in Lennon’s blood after all. (A rather macabre fact; Hastings’ blood-stained shirt would fetch $41,000 at auction in 2016).

Hastings co-worker quickly put them right; “Not him – he works here! THAT guy!” He was pointing to Chapman who had not attempted to flee.

The killer stood by calmly reading his copy of Catcher in the Rye. He cooperated fully, as the policeman handcuffed him.

More police arrived and after seeing the condition of the former Beatle, determined that they could not wait for an ambulance.

They carefully picked him and carried him to the police car – reportedly hearing bones breaking as they did so – before taking off to the hospital.

John Lennon died on the back seat of that car. He arrived at Roosevelt Hospital with no sign of a pulse. Staff declared him DOA upon arrival. 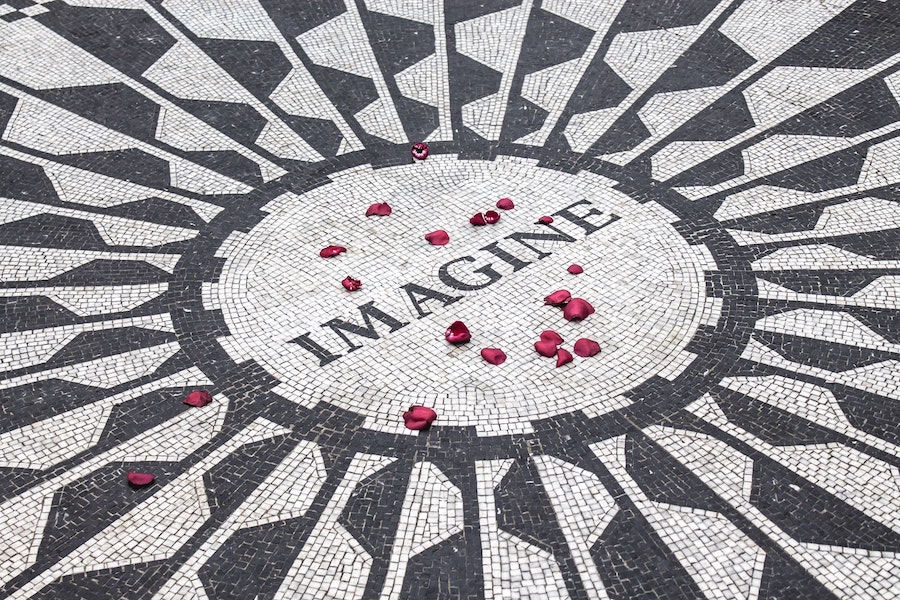 Fans and dark tourists still visit the Dakota building in remembrance of the late John Lennon, however, there is a more befitting location close by that was specifically built to commemorate the Beatles legend.

In 1981, a patch of Central Park, (just a short walk from the Dakota building) was formerly named Strawberry Fields.

Initially, a statue was to be erected there, however, Yoko Ono felt that something more appropriate to John’s character should be created.

4 years later, on what would have been John Lennon’s 45th birthday, (9 October 1985) a ceremony was held in Central Park, to unveil the newly renovated Strawberry Fields.

Designed by landscape architect Bruce Kelly, in collaboration with Ono, the 2.5-acre space is a tranquil destination for people to visit to relax and meditate, a practice Lennon would’ve definitely approved.

The Dakota building can still be seen from Strawberry Fields, however, the green space and beauty of Strawberry Fields provide a positive experience, rather than evoke the tragedy that took place inside the entrance of the now infamous building nearly 40 years ago.

John Lennon died an unnecessary death at the hands’ of Chapman. However, his 1960s counter-culture attitude, values and music influenced an entire generation and continue to do so today.

How to Visit the Dakota Building & Strawberry Fields

The Dakota Building is a residential address with security so you can’t very much walk around as you please. You will be able to look inside the entrance, however, and as long as you don’t loiter take photographs, (you will be moved on pretty quickly).

Strawberry Fields can be accessed just by crossing the street opposite the entrance to the Dakota Building, into Central Park. 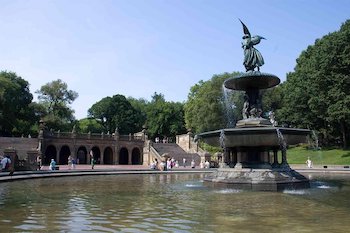 This is one of the best of the walking tours of Central Park currently available.

A professional tour guide will take you along the many trails. The great thing is, famous locations, as well as lesser-known spots, are covered.

Strawberry Fields is part of the itinerary of course. What you’ll love though, is the level of detail. The stories, the history, and the legends are all brought to life in a riveting way as you proceed through the park.