Sidoarjo is the biggest mud volcano in the world and the resulting mudflow is an eerie, desolate sight. The current eruption has been active since 2006, and it has transformed the area south of Sidoarjo, Indonesia.

The cause is also of interest to the average dark tourist. This was no natural phenomenon, the eruption started because of a blowout of a natural gas well drilled by a company named PT Lapindo Brantas.

They deny the responsibility of course. Much like Soviet cover-ups of industrial disasters, company officials contend that a distant earthquake was to blame.

History of the Sidoarjo Mud Volcano 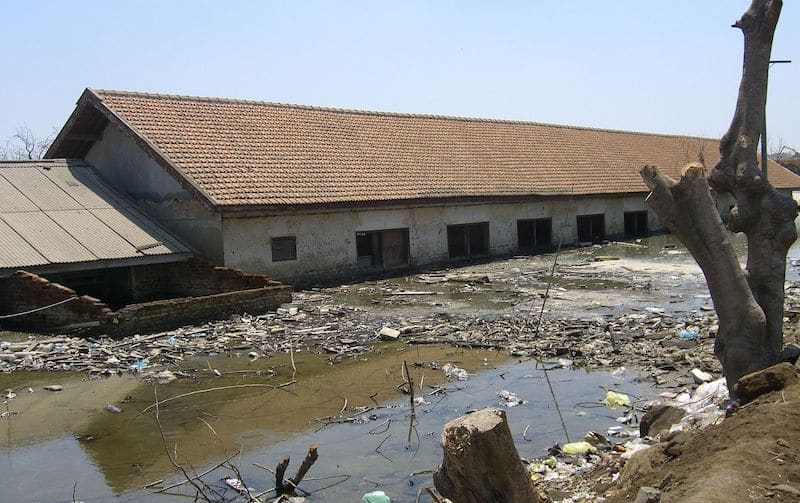 In May 2006 routine gas drilling on Java caused the mud volcano. 13 people were killed in the initial eruption as hot, sulfuric mud began gushing up from the ground.

The local population has been severely impacted by the flow. It is estimated some 30,000 to 40,000 people have been displaced as nearby villages were swallowed up by the mud.

Over the last 14 years, the slide has covered more than 25 square kilometers. At its peak, Sidoarjo Mud Volcano was spewing up to 180,000 m³ of mud per day.

This has diminished over recent years however, with the rate currently at a more manageable rate of 10,000 m³ per day.

Levees put in place in 2008 have helped control the path of the mudflow. Still, when rates increase, local highways and villages come under threat.

The mudflow isn’t expected to stop anytime soon either, scientists expect eruptions to continue for another 30 years.

As already mentioned, officials at the PT Lapindo Brantas oil company state that an earthquake near Yogyakarta was the cause of the mudflow.

Scientists initially found this to lack plausibility due to the sheer distance between the mud volcano and the center of the earthquake. It was over 160 miles away.

More recent studies suggest the two could be linked, however.

Where is the Sidoarjo Mud Volcano?

The mud volcano is located south of the town center. Route 1/Jalan Raya Malang-Surabaya runs past the western side of the mudflow. The closest rail stops are Dusun Ketapang, Jl. Pembangunan (north of the volcano) and Porong, (south).

Visiting the mud volcano involves checking out the various dykes and levees that have been built to hold the mud at bay.

The western dyke has been set up for tourists to some degree with the addition of refreshment stalls, a carpark and stairs leading up to an observation point.

This provides some idea as to the scale of the destruction over the years. The vista, all the way to the horizon is a desolate wasteland of mud.

A monument to those that died during the initial eruption is also in place here. This strange, but effective display has statues half-submerged in the mud, some of them reaching out as if their final death throes. It is poignant and somewhat harrowing in equal measures.

The levee is also a good place to get hold of a local tour guide. They are on motorbikes and will offer rides around the affected areas. In other words, you can get off the beaten track to see some of the remains of the villages destroyed by the mudslide.

Any route offered by these guys will be eerie. To see the top of electrical pylons, the dilapidated roofs of houses and an abandoned mosque poking out the top of the mud is extremely strange.

In areas where the mud has solidified, the bikes will begin traversing above. This too is exhilarating (if a tad disconcerting – if the mud isn’t solid you will sink into its depths).

Halfway through the tour, you can expect to reach the closest point of the live volcano. (When I visited, other bikes had stopped and fellow tourists were carefully walking around the edge).

This is the center of the mudflow and the closest you can get to the source. At a distance, you can actually see fresh mud being spewed from the ground. Steam rises above, an indication of the hot sulphuric nature of the spill.

During more active times it would have been possible to see the mud jettisoning out in bubbles, however, today it is more of a quiet leak.

Other highlights of the tour (from a dark tourist perspective) include a half-submerged cemetery and school, an abandoned stretch of the former main highway, and a deserted village situated on the edge of the current mudflow. Locals had fled because of the inevitability of it being swallowed by the mud.