In the middle of the Karakum Desert in central Turkmenistan, there is a strange phenomenon that has been raging for nearly 50 years.

The Darvaza gas crater, known rather aptly by locals as “The Door to Hell,” or “The Gates of Hell,” is exactly what it sounds – a huge hole in the ground housing a fiery inferno.

Flames lick up to the surface with great ferocity. But this is no natural occurrence, the cause of this 48-year old fire is actually man-made.

This, of course, makes it a popular site for dark tourists that actually make it to Turkmenistan. The reason the gas crater exists in the first place is wrapped up in Soviet mismanagement.

What actually caused the gates of hell?

In 1971 when Turkmenistan was part of the USSR, a group of Soviet geologists was sent to the Karakum desert in search of valuable oil fields.

After a period, they thought they had struck the proverbial gold. An area with substantial oil reserves was discovered, and drilling soon began.

However, not enough research was conducted on the viability and overall safety of the enterprise.

The drill team and geologists were actually drilling into a cavernous pocket of natural gas.

The ground beneath their feet literally could not support the weight of their equipment.

The area collapsed along with all the equipment of the research and drill site. The disturbance had a domino effect on the surrounding ground too. Sedimentary rock began to crumble which resulted in several craters appearing in the vicinity.

The largest of which measures approximately 230-feet across and 65-feet deep.

But what about the flames? 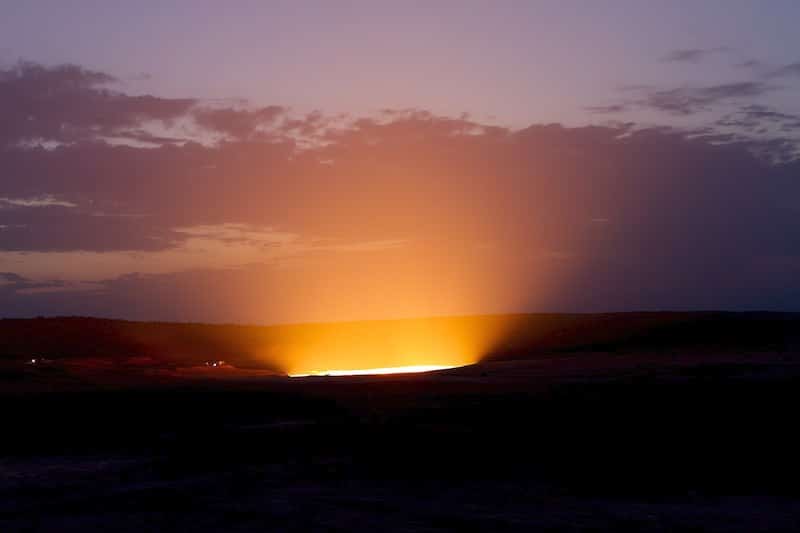 According to Soviet reports, no one was killed when the craters were created. (Quite how seems a miracle to me).

However, it quickly became apparent that natural gas was escaping from the earth. It made it very difficult to breathe nearby. Animals close to the site began to die.

The escaping methane was very clearly flammable too.

The scientists came to the decision that the best course of action would be to ignite the methane, burn out the reserves and have the area safe and habitable once more.

They predicted the flames would last just a few weeks.

Nearly 50 years on, it still rages!

Scientists still do not know how much natural gas is trapped down there. The burning crater is likely to continue for the foreseeable future, put it that way.

Dark Tourism in Turkmenistan – How to get there 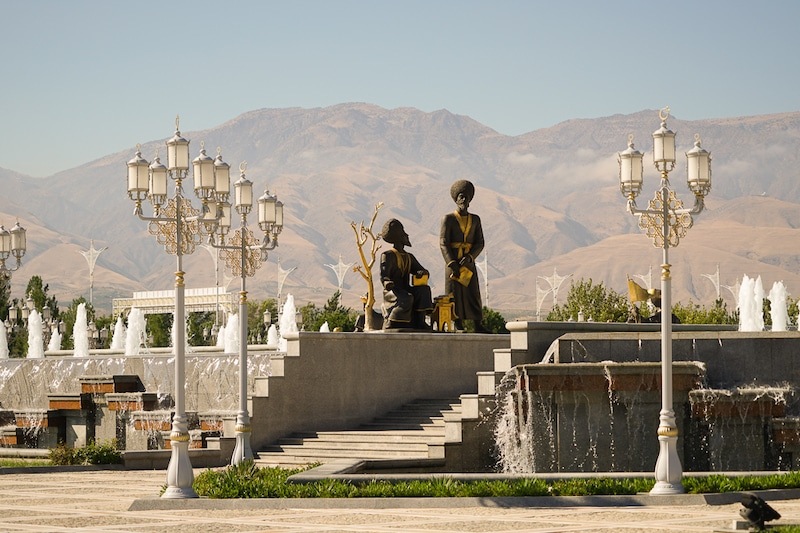 Getting to Turkmenistan is beyond the scope of this little article. I will write more about this fascinating country and the best ways to get there in due course.

I have been to Turkmenistan and it is up there as one of the best travel experiences I have ever had.

Visas are not easy to come by and clearly getting there is no walk in the park either. I entered the country by traveling across the Caspian Sea on an industrial ferry from Baku.

Anyway, assuming you find yourself in Turkmenistan, and have made it to Ashgabat, (the capital) the following details will help you visit the gates of hell.

I recommend that you visit the site at night as the fire is far more impressive and the clear, desert sky glows orange/red from the flames.

The crater is located approximately 161 miles from Ashgabat. The roads are not the best so this translates to about a 4hr drive.

There are 3 main ways of arranging a tour.

Book a tour online before you arrive 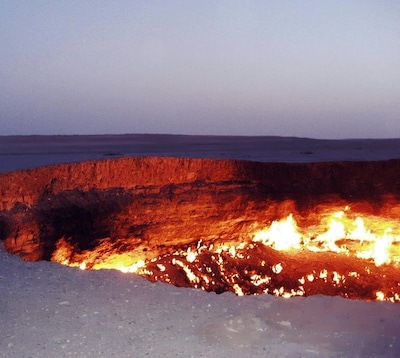 This is the recommended option. Websites such as Tripadvisor have a number of reputable day tour packages to the Darvaza Gas Crater that can be booked online.

They are reasonably priced and offer perks such as 4×4 transit, plus a BBQ dinner near the site.

Some will also arrange local accommodation for the night, whereas others will provide transit there and back in the same day.

Book through an agent in Ashgabat 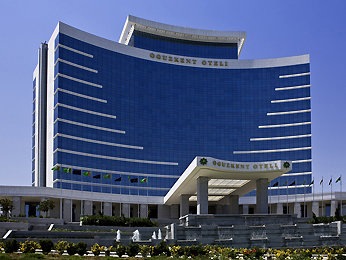 Bricks and mortar travel and tour agents now exist in the capital as the country is slowly but surely opening up to foreign tourists.

Furthermore, your only option for accommodation in Ashgabat is in one of the hotels. Many of which are affiliated with local tour operators.

In short, you can book a tour via your hotel during your stay. 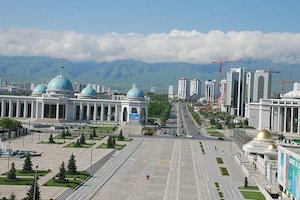 Due to the difficult nature of actually organizing a tour through Turkmenistan, those with the funds and a sense of adventure are advised to look at booking a structured tour package.

These are expensive of course, however, for a hassle-free way of enjoying the dark tourist sites as well as all the other exciting travel experiences the former Soviet republic has to offer, it is hard to beat this option.

Again, relevant packages can be found on a number of operator websites. The link below will take you to one that includes a visit to the Darvaza Gas Crater.

There is also the option of using public transport to visit the craters. This, of course, will be more complicated than simply joining a tour, however, it will definitely be cheaper.

Furthermore, the situations you may find yourself in by trying to reach the middle of the desert location in a country like Turkmenistan will often make for a great travel story.

As is the way, the journey itself may end up far more interesting than the destination itself.

Enough preamble, here’s how to get there via public bus

Ashgabat International Bus Station in the north of the city is actually quite an impressive affair.

It is relatively new and clean and isn’t too difficult to orientate. Connections are good too

Two morning buses from Ashgabat head through Darvaza each day:

The Price is a very reasonable 20 manat to Darvaza. (you will pay 45 manats if you travel via the Konye-Urgench route).

I recommend that you buy tickets from the station the day before as these morning buses can be busy.

The bus stops at a chaikhana a few kilometers north of the Ichoguz train station/crater vehicle turnoff. 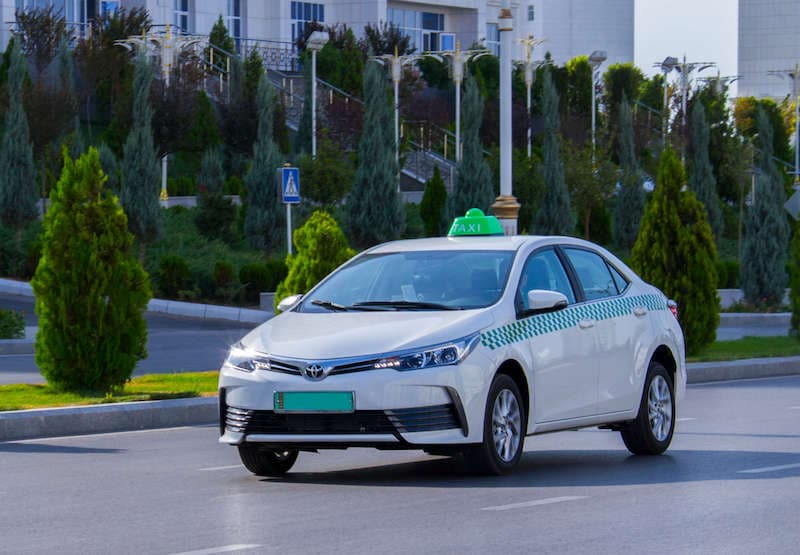 If all of that sounds a little confusing and you just want to pay a driver to take you straight there, a taxi from the bus station should cost around 150 manats and take approximately 2.5hrs.

There’s also the option of taking the train to see the crater.

Unfortunately, you will have to make a connection as there are no direct lines. Another complication is that the train timetable website is very difficult to understand, (there’s no English version). Below is a timetable I have found online via Anur Tour. 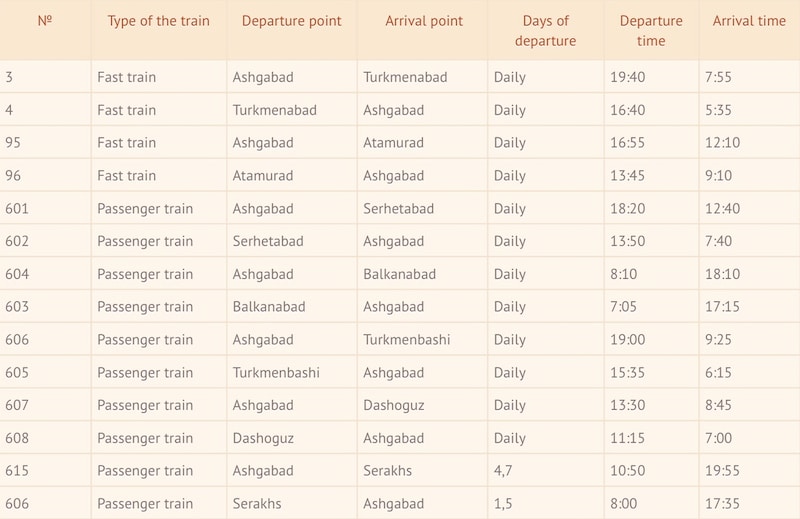 First, you will need to take the 607 train between Ashgabat and Dashoguz (they depart daily at 13:30) and stop at a station called Ichoguz, this ticket will cost you 30 manat.

You then purchase a second ticket at Ichoguz for 45 manats that will take you to Darvaza.

If you do decide to venture to the craters via public transport, make sure your schedule is nice and open to allow for delays, cancelations, and miss-haps. You might also want to have a roll-mat handy in case you need to sleep under the stars. (I speak of this through personal experience).