The Hanging Coffins of Sagada is a strange sight and is part of a tradition that is believed to go back 2,000 years.

The clue is the name of course. The people of Igorot Sagada, within Luzon in the Philippines lay their dead to rest by hanging the coffins off the high bluffs of Echo Valley.

For the dark tourist that makes the trek, (you can only visit via a guide and to make your way to the lowest vantage point is quite a hike), you will be greeted with a vista of a dramatic cliff face, adorned with the battered wooden coffins of the long dead.

Why are the Hanging Coffins there? 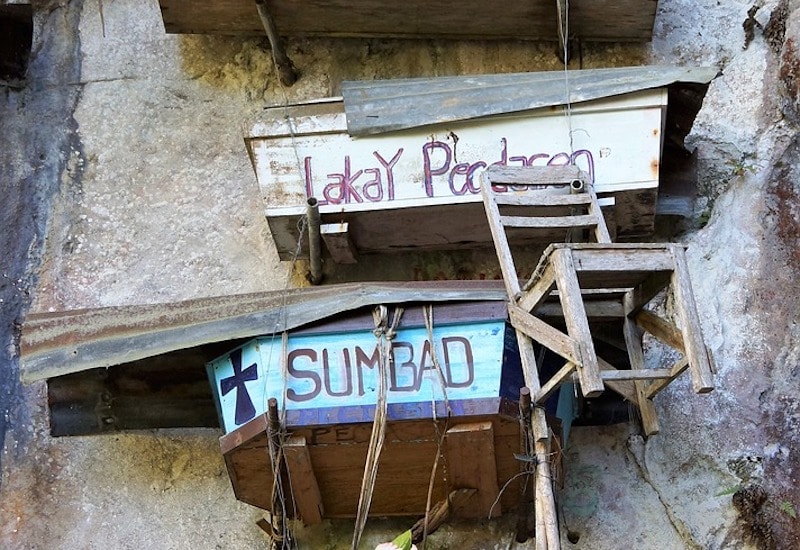 There are a number of theories as to why the locals went to such trouble to mount these coffins in such a manner, (take a look at the photographs – it would have been a treacherous undertaken).

According to Sagada beliefs, to have the coffins elevated would allow for easier passage to heaven.

Practical reasons may have also entered the fray. Rather than bury the dead where the coffins could be at risk of floods or wild animals, the cliff-face location provided extra protection for the loved ones in death.

Some of the hanging coffins that can be seen at Sagada are over a century old. And it is not just the cliffs that were chosen as a final resting place.

Caves in the area are also filled with wooden coffins, mounted to the walls in a similar way.

In an extra macabre twist, you may notice that the coffins are diminutive in size. In order to make them smaller, the bones of the dead were broken so that the bodies could fit inside.

Origins of the tradition and the Chinese Connection

The origin of the tradition is commonly attributed to the Bo people. These were an ethnic minority that originated from Matangba, China. Hanging coffins from this region can be dated back to the Zhou Dynasty (1027-777 BC).

The route and time of their migration into the Philipines is unknown, and it is deemed strange that the burial tradition did not take hold elsewhere.

However, at some juncture, both peoples made contact and the burial practice began in the Sagada.

Furthermore, according to Chinese history, the Bo people placed coffins in high places for the same reasons that the Sagadans did, namely for an easier, unheeded route to heaven.

Where are the Hanging Coffins Of Sagada?

The journey time from Manila is not short. It will take you 6 hours by bus or private car and this is during the summer season. Expect even longer during the rainy season, where roads can be closed due to landslides.

If you’re in Cubao you will be able to find buses directly to Sagada. 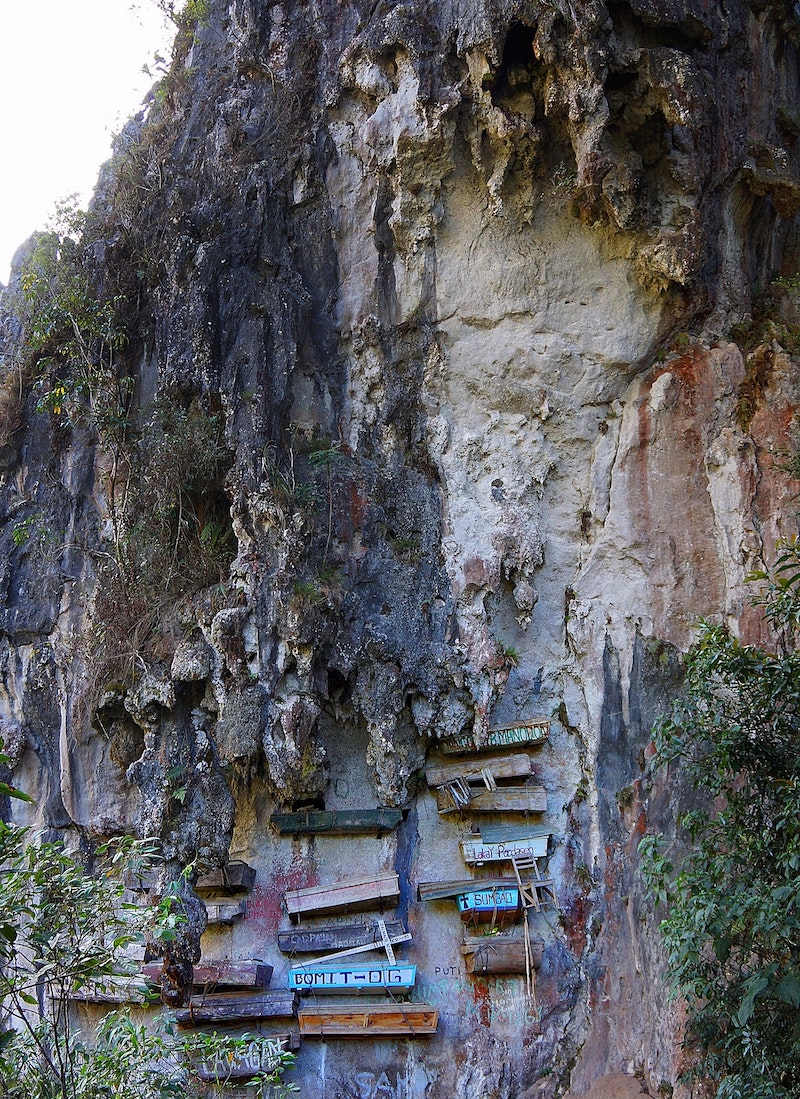 Today, rows of wooden caskets can still be seen hanging from the bluffs and caves of Echo Valley.

While the oldest can be up to a century old, generally speaking, the coffins deteriorate much sooner than that and eventually fall from their positions on the cliffs.

As mentioned earlier, the area can only be visited via a paid guide. The process involves you paying a fee at the tourist arrival center (50 pesos) which is about a 30-minute hike from the coffins.

Here you will be provided with a guide for the walk, (at the time of writing a further 300 pesos). A good tip is to have a conversation with your guide before agreeing to use them.

The English language ability can vary greatly, with some visitors having a lackluster experience due to not understanding a word their guide was saying.

There are a few routes that can be taken to get to the coffins. With the lowest vantage points taking longer and being more difficult to reach.

Needless to say, you should not touch the coffins. In fact, you will find it very difficult to get close to them so binoculars or a decent SLR camera are a good way to view them and to take quality photographs.