Dargavs Village, also known as the City of the Dead is one of many mysterious dark tourist sites you can visit in Russia.

It’s location, tucked away among the ridges of the Caucasus mountains, mean that only the most committed travelers ever get to experience it.

The site is also classed as an ancient necropolis, with a number of myths and legends attached to how and why the tombs were built there. All of which makes it an essential dark tourism location.

The site is first mentioned in the 14th Century when the ancestors of modern-day Ossetians first settled down on the mountain ridge.

However, the oldest crypts at Dargavs date back to the 16th century. Why the locals first began to bury their loved ones in such a manner is unknown.

The Necropolis is made up of a series of stone dwellings grouped together along the ridge. Archaeologists have conducted extensive research and have discovered human remains inside each of the buildings.

The site grew even larger during the 18th Century and evidence points to a plague sweeping through the area decimating the population.

This is also supported by verbal accounts passed through the ages. Local legend says that clans of the time built quarantine houses at the site for afflicted family members to live in until they succumbed to the disease.

More desperate still, those without the support of others would literally arrive at the cemetery, find a spot and await their death.

From there on in, it became known as the “City of the Dead”, and locals stayed clear for generations in the belief that anyone that went there would not come back alive.

Where is Dargavs Village (City of the Dead)?

How to get there?

I first traveled to Dargavs Village on a much longer drive through Eastern Europe, Russia, and the Caucasus. Because I had my own vehicle it wasn’t difficult to organize.

However, it is certainly remote and you need confidence behind the wheel.

Reaching the Necropolis from Nalchik involved a three-hour drive into the mountains, the route taking me along some perilous tracks. (I was happy that my spare wheel was in good condition put it that way).

Advising on how to get there is difficult as it all depends on which direction you are coming from. One of the closest cities to the site is Vladikavkaz, there are plenty of accommodation options there and that’s where I overnighted after my visit.

Mind you, despite being only 55km away, the drive can still take up to 2 hours due to the nature of the terrain, (and stops to take photographs of the incredible scenery).

If an organized tour is more your thing, I have chosen what I believe to be the best available in the recommended box below.

What to expect at the site?

The City of Death contains over 100 ancient white stone crypts that you can actually walk around. These rise up the side of the valley in a disconcertingly organized manner.

At the back of the Necropolis, there is a watchtower, however, you should not enter this as the top part has been destroyed.

It is said that the tower was once used to watch over the dead. (Or maybe to ensure that the plague victims did not roam – my thought process anyway).

Some of the larger crypts are actually 2 to 4 stories high. Generally speaking, the larger the crypt the more people buried inside.

Due to the remoteness of the village you are unlikely to see other tourists on your visit.

Back in Soviet times, it was a much more popular tourist destination with bus visits and ticket booths. Now you can enter for free, and you definitely need to bring your own refreshments. Very few people come here.

Day Tour to Dargavs: To and from Vladikavkaz with Driver & Guide 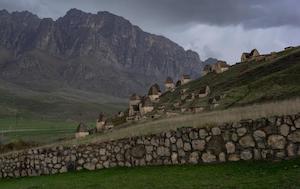 This day trip from Vladikavkaz seems to be very good value for money. To take the stress out of everything, the English speaking guide will meet you at your hotel and a private car will take you into the Kurtatinskoe Ravine along the River Fiagdon. (Plenty of scenery photo-ops and history to lap-up on the way).

A lunch is had at a traditional restaurant serving national Ossetian cuisine. You then head onto Dargavs for the afternoon. You are finally dropped off in front of your hotel in Vladikavkaz by 19:00.