The 2004 Boxing Day Tsunami was one of the most devastating natural disasters in the last 20 years. Countries bordering the Indian Ocean suffered greatly, with an unprecedented loss of life.

Sri Lanka was hit hard, with the Queen of the Sea, tsunami-rail disaster being the largest single rail disaster in world history. Approximately 1,700 people died after the crowded, coastal line passenger train was wiped out by the tsunami waves as they hit the mainland.

Today, 16 years later, some of the carriages from the wreck have been restored and are in action, ferrying passengers across the same line.

The spot where the disaster took place can be visited and one of the mangled carriages now sits outside the tsunami memorial museum in Peraliya. 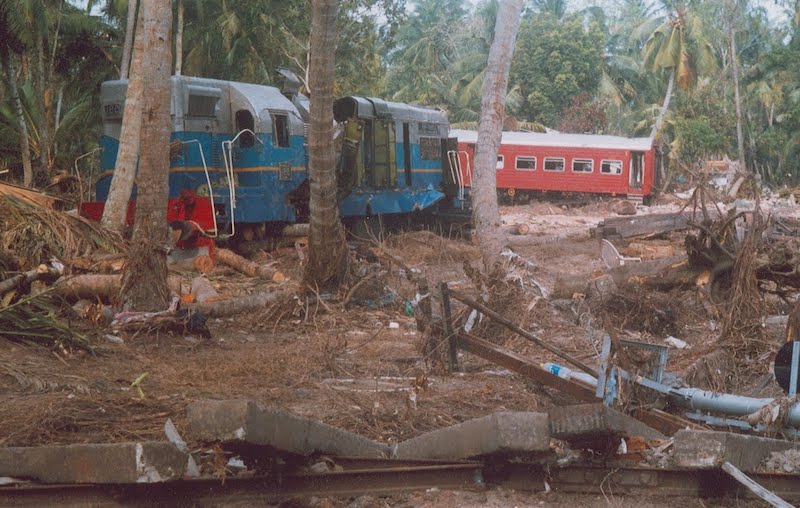 The train running the day of the 2004 tsunami was the regular #50 Matara Express between Colombo and Galle.

The picturesque route runs along the southwestern coast of Sri Lanka. For much of the journey, the tracks are a mere 200 meters (660 ft) from the sea.

The service departed from Colombo’s Fort Station shortly after 6:50 A.M. 1,500 registered paid passengers were on board, the other 200 were unpaid, cramming into the already over-crowded carriages.

Although it was the midst of the Christmas holidays as well as the Buddhist full moon celebrations, it was very much business as usual. The operators were used to the train being as full as it was.

Unfortunately, warnings of the approaching tsunami did not reach the train personnel. There were efforts to halt the train at Ambalangoda, however, the station workers were so busy assisting with the train that no one was available to answer the phone.

The #50 Matara Express slowly departed Ambalangoda with no one on board aware of the approaching disaster.

Further attempts along the route south also failed as the stations were empty, the personnel had either fled or were already dead.

The train finally came to a halt in the village of Peraliya, near Telwatta. It was 9:30 am and the first of the gigantic tsunami waves had arrived at that part of the coast.

Water surged around the carriages, however, at this stage, the depth did not seem life-threatening. Passengers either stayed inside the crowded carriages waiting for the water levels to subside, others climbed onto the top of the cars, thinking that the train was safe on the tracks.

A larger wave arrived shortly afterward which was high enough to begin flooding the inside of the train.

More passengers climbed onto the roof, while in the most crowded carriages, people began to be crushed in the panic to get out.

A few minutes later a huge wave smashed into the train, picking it up from the rails and flinging it into the trees that lined the track.

Almost everyone left inside began to drown as water completely subsumed the train. Further waves only added to the chaos, battering the carriages and anyone that had managed to escape outside.

Investigations in the aftermath state that the high-water marks on nearby buildings place the tsunami waves at 7.5 to 9 meters (24 to 29 feet) above sea level.

It is predicted that at its height the incoming wall of ocean water was between 2 and 3 meters (6 to 9 feet) higher than the top of the train. They didn’t stand a chance. 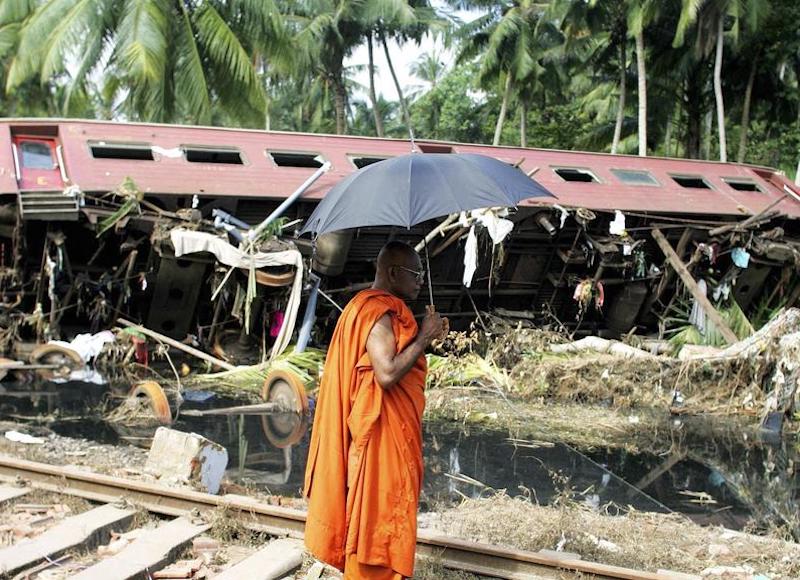 Understandably the Sri Lankan authorities could do little in the immediate aftermath of the disaster. The huge scale of devastation made it impossible for emergency services and the military to begin a rescue effort. They were completely overwhelmed.

In fact, official reports show that the authorities were unaware of the train disaster for several hours. It was until an army helicopter spotted the wreck around 4:00 PM, that relief measures could be organized.

However, with the local emergency services completely destroyed, there were further delays before any significant help would arrive.

Those that were badly injured died in the wreckage due to the lack of aid. In fact, there are several cases where relatives of passengers made it to the crash site first, hoping to find loved ones alive.

It would be a full week before an organized clean up operation could begin.

Sri Lankan authorities state that only about 150 people on the train survived. The death toll of 1,700 people is disputed by some; the figure could be closer to 2,000.

Due to the delay in emergency service aid, only around 900 bodies were recovered. The others were said to have either been washed out to sea, or removed by relatives.

The nearby town of Peraliya was decimated. Hundreds of locals died and all but ten buildings were destroyed.

More than 200 bodies retrieved from the wreck site could not be identified. These were later buried in a Buddhist ceremony alongside the torn railway line.

Across Sri Lanka, the tsunami caused over 30,000 deaths. A huge amount for a population of less than 20 million.

Where was the Sri Lanka Tsunami Train Disaster?

After the cleanup operation back in 2005, the wrecked carriages were placed upright at the disaster site in Peraliya as a memorial to all that died there.

However, this met with criticism from the public (and regular passengers) that would travel past the site.

They were later moved to Hikkaduwa Railway Station, the mangled carriage tomb memorial open for foreign tourists to visit and take pictures. Again, this was seen to lack sensitivity and was controversial.

In the years since the disaster, the Community Tsunami Museum opened in Peraliya. This has provided a suitable home for a section of the wreck.

A single, battered carriage stands next door and acts as a poignant memorial to those that were killed in the disaster.

The repaired railway line still operates a Colombo to Galle service, and the town of Peraliya has been rebuilt.

Today, the Locomotive #591 Manitoba from the wreck has been completely restored. A painted wave motif was added to the side of the train as a memorial to its past.

Furthermore, two of the damaged carriages were removed from Hikkaduwa Railway Station and rebuilt.

The locomotive and carriages returned to Peraliya on 26 December 2008. Today, on the anniversary of the tsunami, the train takes part in a religious ceremony in remembrance of those that died.