Located on the south-eastern end of Pamban Island (or Rameshwaram Island) in Tamil Nadu, Dhanushkodi is an essential dark tourist destination for anyone exploring India.

This once small yet prosperous town had all the amenities of a bustling community; a local church, schools and a railway station that shuttled both residents and tourists to and from the island.

That all changed on 22 December 1964 after a cyclone swept through the town, ravaging the buildings and decimating the population.

An estimated 1,800 people died, nearly all structures were destroyed. In the aftermath, the government declared the town unfit to live in and it has lain abandoned ever since.

The pre-cyclone heyday of Dhanushkodi 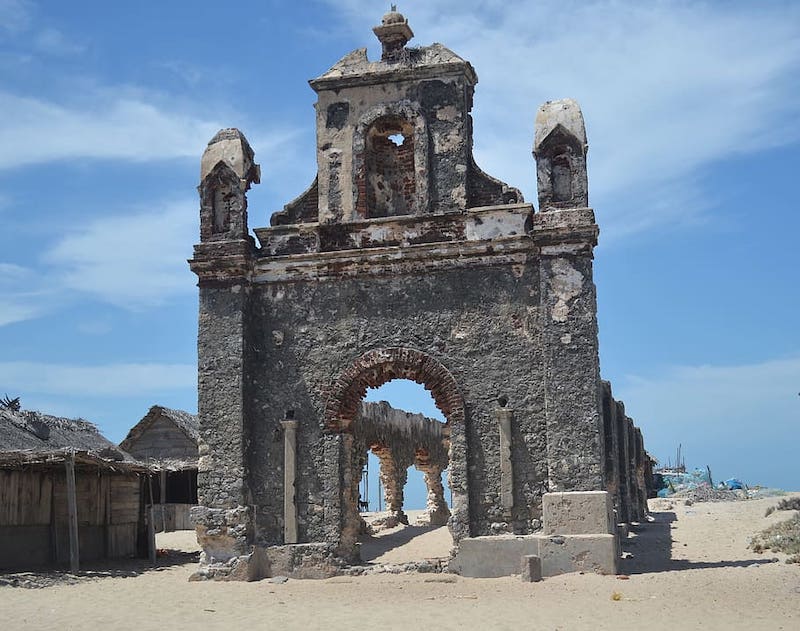 Dhanushkodi was once an important port for both traders and pilgrims. Bordered by the Bay of Bengal on one side and the Indian Ocean on the other, the town’s location made it a convenient trading point as well as a natural stop-off for people heading to Sri Lanka (ferry services were available between Dhanushkodi and Talaimannar).

This meant that beyond catering for the locals, the town also had hotels, and markets selling textiles and other goods to those passing through.

An administrative presence was also important, of course. During the time of the British Raj, customs and port offices were set up to control and tax the flow of people and goods.

Along with its beautiful location, on an island between an ocean and bay, Dhanushkodi was a good place to live.

The area was prone to strange geological activity. In the late 1940s, the southern part of Dhanushkodi sank by almost 5 meters due to vertical tectonic movement. This caused a large patch of land, stretching some 4.3 miles long (and ⅓ mile wide) to be submerged by the sea.

Some buildings were lost as a result, however, the death toll was unreported and is assumed minor.

It was a different story in 1964. As the Rameswaram cyclone crossed Sri Lanka and made landfall at Dhanushkodi it caused devastating damage. It was, in fact, one of the most powerful storms to ever strike India on record.

It must have felt like the end of the world to those unfortunate enough to be there.

An especially horrific demise was experienced by the 110 passengers and 5 staff on board the Pamban-Dhanushkodi passenger train.

The train was passing across the Pamban bridge before entering Dhanushkodi train station when a massive tidal wave submerged the carriages drowning everyone aboard.

The entire town was marooned on that fateful night. After the cleanup operation, the Government of Madras declared Dhanushkodi a ghost town.

Although not at the epicenter of the famous Boxing Day tsunami of 2004, Dhanushkodi still felt the impact.

The sea around the island receded by about 500 meters from the coastline, briefly revealing the part of town that had been submerged by the tectonic movement of the 1940s.

This was then followed by massive tsunami waves that flowed through the already battered, abandoned town.

Where is Dhanushkodi Ghost Town?

How to get to Dhanushkodi

The best way to reach Dhanushkodi is by taking the train from the mainland over Pamban Bridge, (spare a thought for those that lost their lives on that fateful day) to Rameswaram.

On route, you will pass through several fishing villages and can enjoy the stunning views across the Palk Strait.

Surprisingly (considering the uninhabited status of Dhanushkodi), there is regular public transport to the ghost town. A government bus runs every 30 minutes from Rameswaram. This costs INR 30.

You can also book tours in a 4×4 vehicle with a guide. This can be done online or upon arrival in Rameswaram. 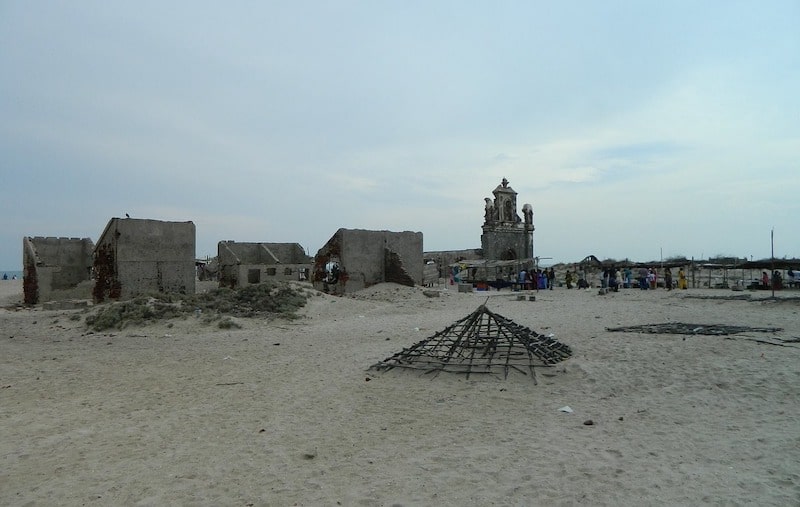 There is not much left of the town today. It is possible to walk through the ruins of the church and police station. Sections of the train station also remain. While the surrounding scenery is wonderful, the eeriness of the ruins and the knowledge of what happened there will stay with you.

You can also visit the temple where the surviving residents were said to have escaped death by seeking refuge inside.

It is also worth traveling the extra few kilometers to Dhanushkodi Beach Point, and the Arichal Munai, which is the extreme point of Indian soil closest to Sri Lanka.

The view leading to the beach is simply stunning, with the ocean lapping up to the edge of the road on both sides.