Visiting the most deadly lake in the world is on my bucket list of dark tourist destinations. There is a clear winner here too.

Lake Nyos in North West Cameroon managed to kill over 1,700 people and 3,500 livestock in a single night. Not one of the victims drowned.

The communities of several nearby villages were decimated, with the furthest death occurring 15 miles away.

Stranger still, is that most of the victims died in their sleep. Asphyxiation was the cause of death, the lake was a CO2 ticking time-bomb.

The Lake Nyos disaster occurred on 21 August 1986. It began with the buildup of carbon dioxide within the lake.

In a strange natural phenomenon, the lake’s position inside the crater of a dormant volcano means that gas rises from an underground magma chamber.

To compound the problem, Lake Nyos is unusually still. With little in the way of environmental disturbance, the CO2 gas built up over time and was caught at the bottom of the lake.

This created a highly pressurized layer of carbon dioxide. The depths of the lake became loaded with gas until more than 5 gallons of CO2 were dissolved in every gallon of water.

This, of course, is not sustainable. No one knows what triggered the explosion. It could have been a small landslide that released the gas, or even light rain at the edges of the lake.

The aftermath was catastrophic. 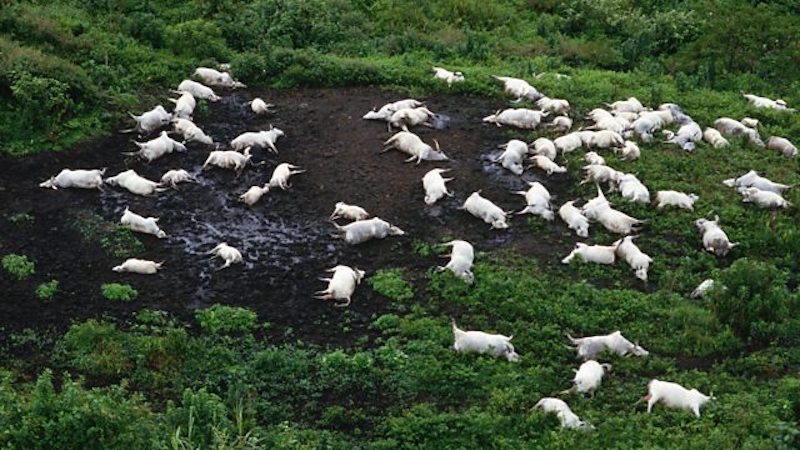 Just after 9 p.m on that fateful day, the lake erupted. Here’s some science that will blow your mind. It certainly does mine.

However, the gas cloud was a quiet killer. Rising at a speed of 100 kilometers per hour (62 mph) it shot up into the air before slowly descending upon the surrounding landscape under its own weight, (CO2 is heavier than air).

People in the nearby villages didn’t stand a chance. The CO2 displaced all the breathable oxygen, suffocating everyone in its path.

(The very few that survived understood what was happening and managed to flee to higher ground in vehicles.)

The normally blue waters of the lake turned a deep red in the aftermath. The water level also dropped about a meter and nearby trees were knocked from their roots.

Where is Lake Nyos

How to get to Lake Nyos

Even assuming you are already traveling within Cameroon, getting to Lake Nyos isn’t easy. The roads around this part of the country are very under-developed.

Getting to Nkambe from Bamenda shouldn’t cause you too many problems. In fact, from Bamenda, it is possible to organize a Lake Nyos trip with a tour operator.

That being said, the route from Nkambe is pretty much off-road. At times you will even end up driving along the river bed. Because of this, it is recommended that you only attempt the drive during the dry season (December to May).

The dangerous terrain of Lake Nyos and the fact the gas levels are under constant surveillance means that the area is a designated military zone.

Don’t let this put you off, however. It is simple enough to get permission to visit the lake at the nearby military post.

After visiting Lake Nyos you will be able to take a small, semblance of a road onto Fundong or Wum, where beautiful views and many waterfalls are said to line the route.

It has been over 40 years since the disaster and despite the fact scientists have installed measures to release the buildup of CO2, (the base of the lake now has 3 degassing tubes in place), the area still presents a very real danger.

The lake’s natural dam made from volcanic rock is weakening and could fail at any time. Landslides outside the dam wall are also causing problems. Added to that is the fact Seismic activity has increased in recent years.

Resettlement has taken place over the intervening years, however, the surrounding area remains under constant threat from the lake.