Plokstine missile base was an important underground military base in the Soviet Union. It is now an excellent Cold War Museum and a must-see visit for dark tourists in the area.

Situated near Plokščiai village, north of Plungė, Lithuania, the remote Plokštinė forest made for a perfect location for a series of top-secret missile silos.

Furthermore, the chosen area (Žemaitija National Park) was 160m above sea level, all of Europe was in missile range, including Turkey and islands of the Mediterranean.

The small local population was paid 4.5 roubles to move their farms and in 1960, 10,000 soldiers descended on Plokštinė for construction work to begin.

History of the Plokstine Missile Base

Incredibly, the four missile silos were dug out with shovels. Even with the amount of manpower involved, the works took almost 2 years to complete.

Beside the silos, a large hole was excavated to house the support structures, control rooms, communications centers, and sleeping quarters for the soldiers that arguably had one of the most stressful jobs ever conceived; control of a button that once pressed could kill millions of innocent people.

Quite how the Soviet government managed to keep the construction and operation a secret from the allies for over 18 years (it was revealed by U.S. reconnaissance in 1978) is a mystery.

These were not nuclear bunkers mind you. They were designed so that personnel could survive underground for just 15 days in lockdown mode.

In case of a nuclear attack, the silos could sustain life for 3hours. Enough for a retaliation strike.

Other works around the site included a 2.5 km trench connecting the Plateliai lake as a water supply to the base. A new road to Plokštinė was also constructed.

On December 31, 1962, the site was deemed operational. At 10 pm the first shift started work, seeing the new year in with their hand on the button. 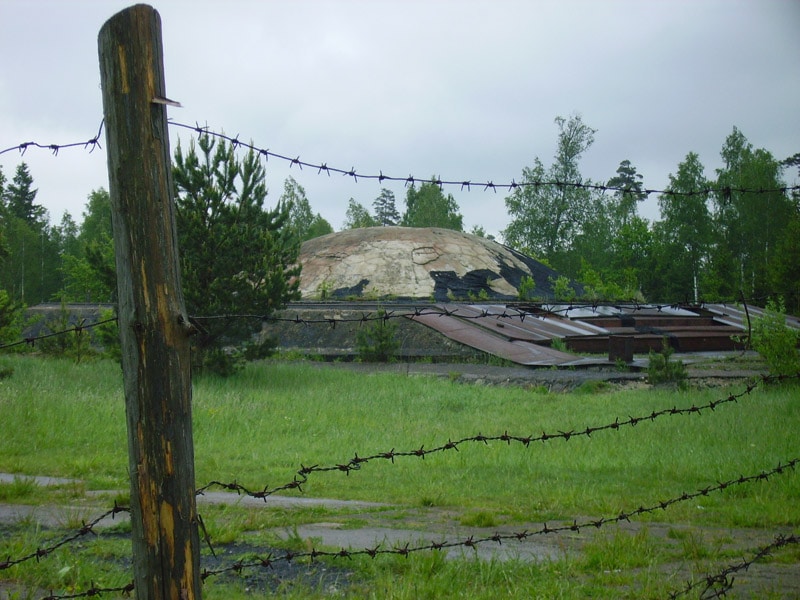 For the remainder of the 1960s and most of the 70s, the base operated in secret.

The active team was around 300 military staff. Most of these were to guard the facility.

The silos housed 4 R-12 Dvina missiles with nuclear warheads. These stood 23 meters high and were some of the most powerful missiles in the world at that time. It was the first base in the Soviet Union with the capacity to launch them.

They were fuelled with a mixture of kerosene and nitric acid and were intended to last 10-15 years.

The rockets were each aimed at different western countries. It actually gives you chills to think that these deadly weapons were ready to be launched at a moment’s notice.

However, during the active life of the base, no missiles were ever launched.

Where is the Plokstine Missile Base?

After being in full operation for 12 years the site was decommissioned. The military left along with the warheads. Untouched during the remainder of the Soviet Union, it was fully abandoned in the years following the collapse of the USSR.

For almost 2 decades it was then a mecca for urban explorers and locals stripping the base for scrap metal.

A new life for the former missile base began in 2012. Extensive reconstruction works financed by the Lithuanian government saw the complex made safe and the opening of a Cold War Museum inside the main bunker.

A guide is essential when you take a trip to the museum as the most interesting sections do need explaining.

(A comprehensive, prearranged guide should also take you to other areas within the forest associated with the base, which is definitely worth doing.)

Inside the exhibition area of the museum, you will find text-and-photo panels, (with dubious English translations) as well as original artifacts and documents.

What you would expect from a cold war museum is all present and correct (gas masks, uniforms, rifles, communications equipment, etc), however, there are also some gems to look out for.

Of particular poignant interest are the launch keys that would have been used should an attack have been ordered.

It is also worth spending time taking in some of the audiovisual displays. Videos on loop include original footage of the construction works, how the silos were loaded with missiles, how the warheads were installed, and a launch sequence reconstruction.

It is possible to explore (with a guide) areas of the missile base outside the renovated museum. Little remains in the way of equipment of course, (what wasn’t removed by the Soviets was taken by salvage hunters), however being shown where the rocket fuel tankers were once located, (only the support struts remain) is chilling when you think what they were supporting.

Just walking the long corridors between the different sections of the bunker is also an experience. You can imagine the soldiers scurrying about their business in this top-secret location.

The room that used to be the Communications Centre is still intact. Two dummy mannequins in uniform sit ominously at controls desks that would have contained the button.

The highlight of the trip however is going inside one of the missile silos. You walk to this from the main bunker along a long, dark tunnel and the atmosphere is extremely foreboding.

The silo is empty obviously, however, the sheer scale of it, provides a very visual representation of how large the missiles must have been.

There’s also a giant steel lid on top of the silo which would have automatically slid to one side during the launch process.

If you are fortunate enough to organize a guide that will take you to locations around the base, highlights here include the former warhead storage facility and some outer fence security guard posts. The water pump station by the lake can also be visited.