During the Cold War, the Soviets couldn’t get enough of blowing up nuclear weapons in northeastern Kazakhstan.

The tests were not always with the intent to one day nuke the USA, however. Conducted by the military under the banner of “Nuclear Explosions for the National Economy”, the aim was to investigate the feasibility of using nuclear weapons to help drill for oil or move earth in the construction of canals and reservoirs.

It is easy to forget that the Atomic Era was once wrapped up in a sense of positivity. The benefits of nuclear power seemed endless. Chernobyl was still decades away.

The US had a similar program (“Operation Plowshare”), however, while America quickly realized it was a bad idea (conducting 27 tests before stopping in 1977), the Soviets continued until the fall of the Iron Curtain in 1989. It is believed that over 120 nuclear tests were conducted in total.

One area that copped it was the Chagan long-range bomber base.

The now-abandoned region on the Irtysh River contains a crater lake caused by one of the tests as well as the nearby abandoned town and airbase.

It has been completely left to nature and is a mecca for dark tourists and abandoned junkies that make it to this area of Kazakhstan.

History of the Chagan Nuclear Tests

Chagan was the largest test that Nuclear Explosions for the National Economy program conducted. Interestingly, it was also the first.

Some believe that the Soviets managed to get their hands on top-secret information pertaining to the American Project Plowshare program. The first peaceful nuclear explosion conducted at the Nevada Test Site in July 1962 was the 104 kt Sedan test.

Chagan was a near clone of this and was detonated on January 15, 1965. It had increased yield making it the equivalent of 140 kilotons of TNT. The aim was to produce a large cone-shaped crater suitable for a lake.

The location of the Chagan test was within the Semipalatinsk Test Site, on a dry bed of the Chagan River. The position was chosen so that the edge of the crater would dam the river during the high spring flow each year.

By all accounts, the test was a success in terms of the resulting crater that was filled to become Chagan Lake, (more on this below).

However, what the Soviets had not fully accounted for was the radioactive plume. Chagan released a large amount of steam and pulverized rock and what could have been as much as 20% of the bomb’s fission byproduct into the atmosphere.

The small but measurable radioactive plume was detected over Japan. This caused an international uproar with the US quick to complain that the Soviets were violating the October 1963 Limited Test Ban Treaty.

The protest did not stop the Soviets from conducting their tests. However, subsequent nuclear explosions under the program were significantly smaller. 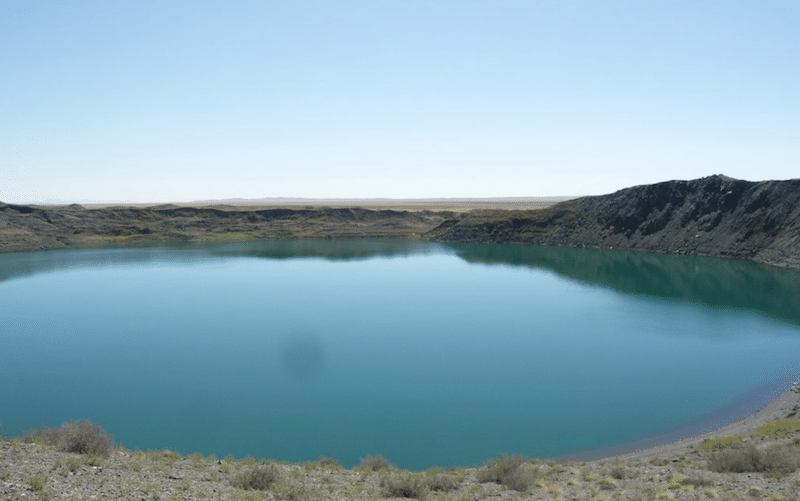 Lake Chagan still exists today and can be visited without the need for a guide or special permission. This is despite the fact that it continues to be radioactive.

The Chagan test that caused the initial crater, created a 178-meter-deep (584 ft) hole in what was a dry section of the Chagan River. The blast caused a 400 m (1,300 ft) wide hole that has appropriately become known as “Atomic Lake”.

The crater was quickly filled with water from the Chagan River with the deepest section today being over 100m.

The water contains 100 times more than the permitted level of radionuclides in drinking water. It is not a place for boat tours or swimming either.

The Soviet government was once proud of Lake Chagan and the nuclear testing that created it. They even made a film with the Minister of the Medium Machine Building Ministry, (the department responsible for the Soviet nuclear weapons program and the tests at Chagan).

In the film, the Minister joyfully takes a swim in the crater lake. The film also depicts how water from the lake was used to irrigate local farmland and feed cows. 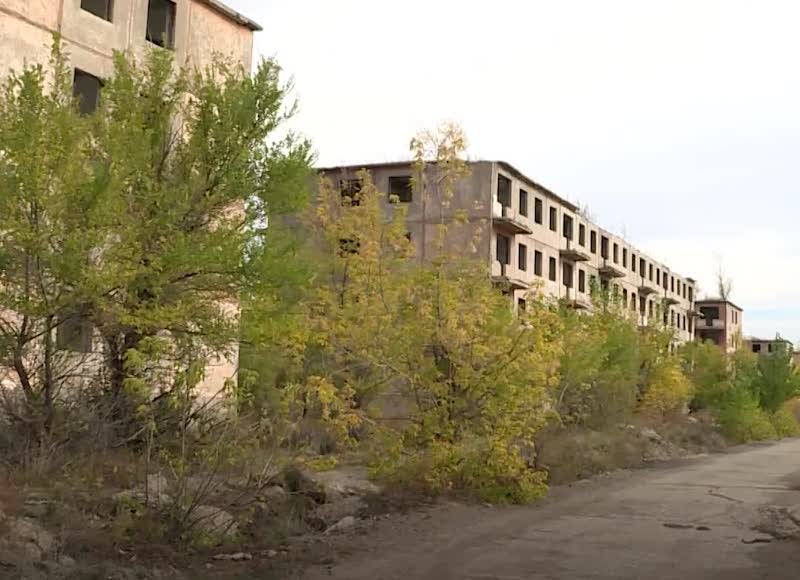 The abandoned town of Chagan used to house the military personnel (and families) that worked at the nearby Chagan military airfield and Semipalatinsk Nuclear Test Site.

Over 10 thousand residents used to live within the town before the break down of the Soviet Union. With funding cuts and the military base fully closed by 1995, the site has been a ghost town for 25 years.

This fact alone makes it a fascinating dark tourist experience.

Where is Chagan Ghost Town & Crater?

Chagan is about a 1hr drive from Kurchatov along the R-174 highway. The ghost town is just a mile off the main road, with entrance to the former airbase a few miles south of the town.

The Winds Of Chagan, A Post-Soviet Nuclear Ghost Town

An eerie wind is the only sound to be heard in a once-secret northern Kazakh town which used to be the hub of the Soviet nuclear weapons program.

There are three areas of interest when you reach Chagan, the abandoned ghost town, the former military airbase, and the lake.

Inside the Ghost Town

The town was once full of stereotypically, grey and drab Soviet-style apartment blocks. Many still exist but in a completely dilapidated state.

Initial looting and the elements over more than two decades have really taken their toll. However, fans of abandoned ghost towns will love the derelict malaise.

An interesting memorial will greet you at the entrance to the town. The pyramid-shaped block of granite features a plaque with the image of a T-95 long-range strategic bomber in flight.

In Russian are the words:

“Part of our hearts remain here forever. People of Chagan of different times and countries. 1954 – 1994”.

Large piles of rubble line the road into the Chagan, evidence of some of the demolition work that has been attempted over the years.

The main residential areas can be ventured around, however, you do need to exercise caution when entering any of the buildings. With collapsed ceilings and broken staircases, you have to tread carefully, with some areas being completely off-limits.

One large public building stands to the west of the town. This is in such a state of ruin it is difficult to ascertain what it might once have been used for. Close to this is the shell of what might have been the town public swimming pool.

Despite the forlorn condition of most of the buildings, it is still an exceptional experience walking around the remnants of what was once a bustling soviet community.

Once you have explored the main town, there is still a lot to see at the former military airbase.

This is located a few miles south of the main Semey-Kurchatov road and much like the town, the aerodrome (as it is known by the locals) is in an equally ruined condition.

Barrack buildings stand with collapsed roofs and missing walls, there are also a number of small tunnel-like bunkers around the site that were once used to store bombs, missiles, and other ammunition.

A double runway still exists, albeit overgrown with weeds. Alongside the runway, the main “terminal building” (complete with the Soviet red star) still stands. This is quite the sight and is a definite photo opportunity.

Overall, it is a somewhat eerie experience to wander around the airbase in the knowledge that this was once the home of nuclear technology that could have potentially been used against the west.

Both the abandoned ghost town and the airbase are essential dark tourism destinations for those adventurous enough to find themselves in this remote part of Kazakhstan.