Reggane and In Ekker were once nuclear test sites in Algeria. It was here that the French experimented with their atomic arsenal in the 1960s.

Thirteen underground nuclear detonations were carried out at the In Ekker site. The reckless nature of the tests caused large radioactive contamination of the soil. It is also feared that underground aquifers could have been contaminated, resulting in direct radioactive exposure to the local population.

The tests at Reggane were equally as dangerous, with a shocking disregard for the health and safety of the community.

Four atmospheric nuclear explosions were carried out between 1960 and 1961. The bombs were detonated at the Saharan Military Experiments Centre, with the resulting fallout contaminating vast swathes of the Sahara desert.

Soldiers, workers, and local nomadic tribes were exposed to high-levels of plutonium, a fact that has led to local long-term health issues such as cancer, infertility, and genetic mutations.

Today it is possible to visit these abandoned military bases. Both sites are fenced off, however, there are no guards.

You may want to take a Geiger counter with you however, hot spots still contain potentially deadly amounts of radiation if you stick around too long.

History of Reggane and In Ekker French Nuclear Test sites

France first established the French Atomic Energy Commission (CEA) in 1945. The department was responsible for all nuclear affairs be it scientific, commercial, or military.

By the 1950s the French had the ability to process weapons-grade plutonium and began mining uranium for weapons production.

Within a few years, they had built their first atomic bomb. A base was established 50 km southwest of the Saharan city of Reggane, in order to carry out the testing.

“Gerboise Bleue” (“Blue Desert Rat”) was the codename of the first atmospheric test. It had a yield equivalent to 70 kilotons of TNT and was detonated on February 13, 1960.

Three more tests took place in 1961 (“Gerboise Rouge,” “Gerboise Verte” and “Gerboise Blanche”), however, the anti-nuclear testing protests quickly gained momentum both inside Algeria and back home in France.

The French government was forced to stop atmospheric testing and began detonating underground and the newly built In Ekker site in the Algerian mountains. 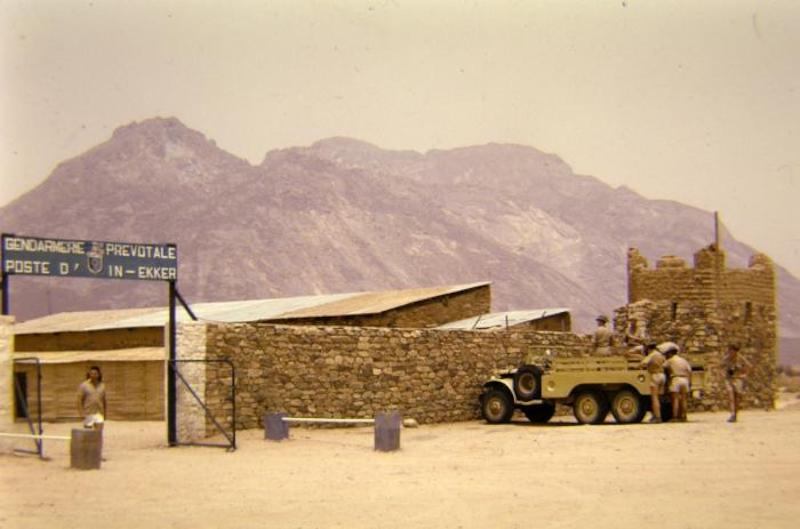 The In Ekker series of tests began after the closure of the Reggane site. Again, chosen because of its remoteness, the area was populated by nomadic tribes and passing caravans. Peoples the French authorities clearly considered expendable.

Up until February 1966, a total of thirteen nuclear bombs were det­onated within tunnels in the Hoggar mountain range.

A particularly dangerous series of testing occurred between May 1964 and March 1966.

The first of these, codenamed “Pluto”, was designed in a way to simulate a plutonium bomb accident. The French detonated the bomb so that the desert winds could carry and disperse radioactive fallout. This was then measured to better understand the consequences.

The most infamous In Ekker test (codenamed “Béryl,”) occurred in May 1962.

Containment measures failed that resulted in molt­en rocks being hurled from the tunnel after the explosion. A radioactive cloud spread 2.6 km into the atmosphere.

Under normal circumstances, the disaster may have gone unnoticed. However, on this occasion, 2,000 spectators (including French ministers) had gathered at what they thought was a safe distance to watch the detonation.

They fled the scene in panic. But they were too close. Those in the immediate vicinity were exposed to dangerously high levels of radiation.

As a result, many later suffered from cancer or other diseases related to the accident. This included the French Minister of State, Gaston Palewski. A guest of honor on the day of the test, he subsequently died of leukemia in 1984.

How to get to the Reggane and In Ekker Test sites 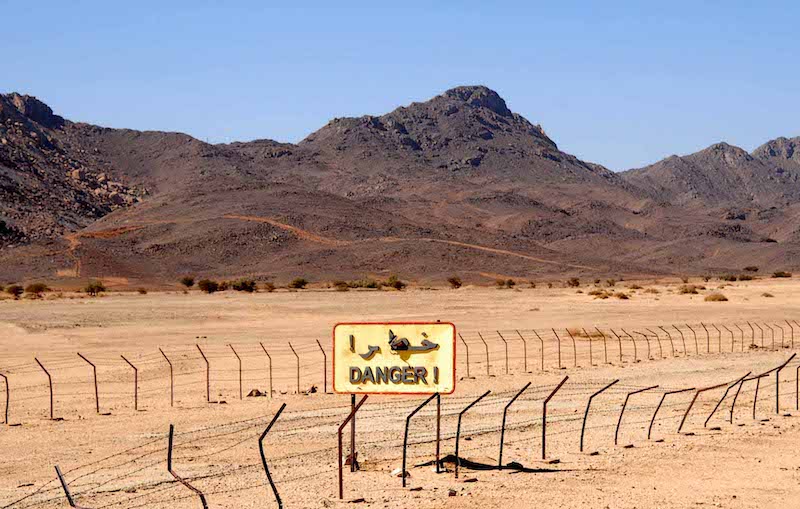 One common way of seeing the area of the In Ekker tests is en route to Tamanrasset. Here you can see the infamous mountain where it all took place (and scale the fence into the contaminated zone if you are happy to take the risk), as part of a journey that passes through the Ahaggar Mountains and National Park further south.

Visiting the Reggane and In Ekker Nuclear Test sites Today 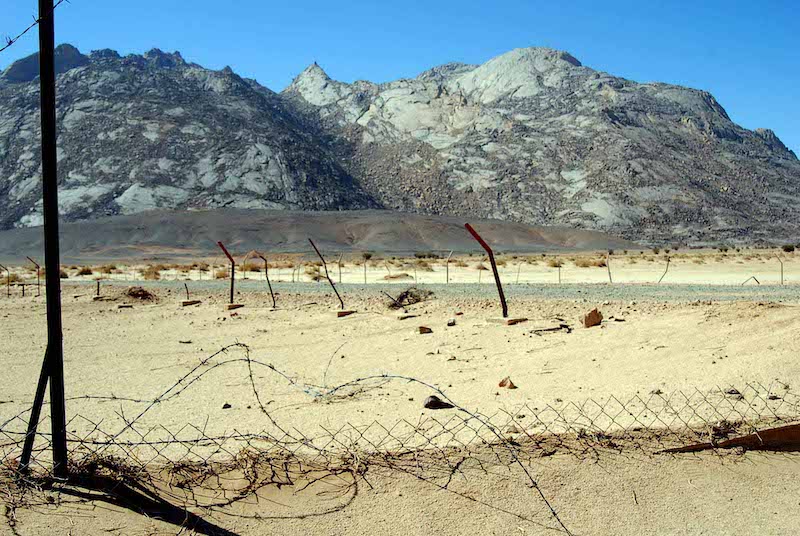 Visiting the sites today is not for the faint-hearted. Over half a century after the nuclear testing ended, the International Atomic Energy Agency (IAEA) still claims that increased levels of radioactivity exist in the entire test areas of In Ekker and Reggane.

Venturing into these areas is dangerous as it is possible to inhale airborne pieces of radioactively contaminated sand.

Furthermore, as the site is completely unattended, there is no way of knowing where any hotspots are. There are no guides to take you around either.

For all of these reasons, if you do decide to venture into either of the test sites, you should take all the best possible precautions, and not hang around for long.

What you can expect to see? 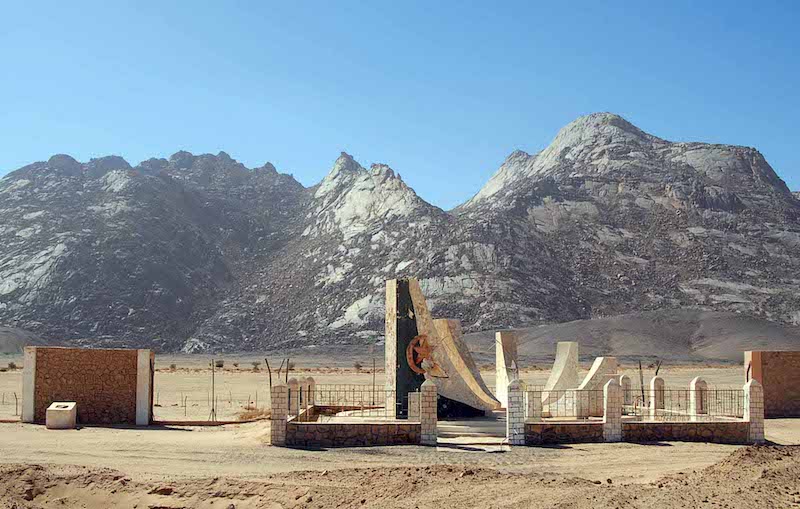 In 1999, the Algerian government erected a 40 km-long fence surrounding the In Ekker site. This was to prevent looters and nomads from accessing the contaminated mountain.

However, this has deteriorated over the years making the area easily accessible.

Large amounts of radioactively contaminated scrap metal and abandoned equipment have been stolen and sold on the black market throughout the last few decades. This means that not much remains of the old military bases.

However, near the tunnels, you will still find bits of cold-war era technical instruments. These are inevitably contaminated so do not touch or remove anything from the site.