The Belgium section of the Western Front during WW1 became known as the Trench of Death.

As 1914 drew to a close, the Battle of the Yser was one of a number of bloody engagements that managed to hold back the advance of the German army.

A respite came after the Belgians deliberately flooded the polders between the River IJser and the route from Nieuwpoort to Diksmuide. The temporary stalemate provided a chance for both sides to fortify their strongholds.

Defensive positions were dug and it was here that the Great War first slipped into the brutal attrition of trench warfare.

The conditions were horrific, and regiment after regiment of the Belgian army battled endlessly to prevent the Germans from advancing towards the French border.

Attacks to gain ground were incessant on both sides. The narrow, muddy trenches offered little in the way of shelter from mortar attacks. Comfort was non-existent, death was prevalent.

This didn’t stop the Trench of Death being expanded. Between 1915 and 1918, soldiers worked to a point where both sides were literally just meters apart.

This was done via the building of saps, additions to the trench that extended below the apposing fortifications so that soldiers could reach into enemy lines.

It worked both ways, however. The Germans discovered the saps and began infiltrating the Belgian trenches.

The constant threat of German advancement meant that allied soldiers were forced to man the trenches for three days straight. (With the following 3 days resting in the cantonment area behind the combat zone).

In 1917 the Belgian forces attempted to stop the Germans using the saps by building large concrete shelters. Called “Mouse Traps”, these had lookout holes so that the soldiers could see if the enemy were attempting to enter the trench.

The Trench of Death near Diksmuide and the resulting containment of the German Army was a pivotal aspect contributing to the success of the allied forces in WW1.

The area remained the epicenter of the Belgian resistance, until the Advance of Flanders, a joint offensive between Anglo-Belgian soldiers that began in September 1918.

If driving, from Diksmuide, take the Ijzerdijk north for 1.5 km. The monument will be on your right side when you arrive at the location. If you are visiting the site without being part of a tour, we recommend that you organize a guide before your arrival, (you will not be able to book one once there).

There are also commercial tours that visit the Trench of Death as part of a wider Belgium WW1 site itinerary, (see box below). 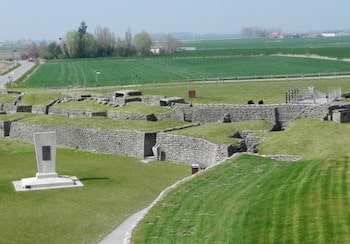 One of the best-organized trips to the Trench of Death is this full-day tour of the Flanders Battlefields from Bruges.

Reviews are consistently good on this with the extensive knowledge of guides being a highlight. Some people have complained that it is long at 11hrs.

You will see all the main WW1 sites of Flanders which makes it one of the most comprehensive tours currently available.

What to expect when visiting the Trench of Death

The Trench of Death at Diksmuide is one of the best-preserved trench systems built during WW1. It is also the last remnant of the Belgian defensive strongholds along the Western Front.

However, due to this preservation, it is quite difficult to imagine the harshness of the conditions for those soldiers over a century ago.

The trenches are reinforced with concrete, there is also a modern museum/interpretation center attached to the monument. Everything is clean and orderly and the surrounding nature is green and well-kept. The area is designed for the contemporary tourist basically.

That isn’t a complaint per se, I wouldn’t expect the trenches to be a mud-filled chaotic experience. It does take some imagining to appreciate the horrors that took place though.

The site is extremely well organized from an educational perspective, with multi-media exhibits aplenty.

The history of the trenches is highlighted via fifteen interactive applications. There are pictures, genuine film footage and loads of original objects on display.

You should also take the time to read (and hear via footage of interviews) some of the personal stories from those that lived through their time in the trenches. These are especially powerful.

Another interesting point for visitors today is that in 2018, a German bunker was incorporated into the site so that the opposing side of the war narrative can be explored.

Tip: For Dark Tourists interested in WW1 a visit to Croonart Wood provides a better idea of conditions and is recommended alongside a trip to the Trench of Death.