The islands around French Guiana exhibit unparalleled natural beauty. If paradise needed a poster child, these could be it.

Lush green forests, meet sandy beaches that roll into crystal blue waters. Tourists flock to this part of the world for rest and relaxation.

However, anyone unfortunate enough to be here when Devils Island was a French penal colony would have thought very differently.

During its life as a place of incarceration, over 80,000 men were imprisoned. Devils Islands also became one of the most notorious prison systems in the world. Known for its harsh conditions and ridiculous mortality rate, which was believed to be more than 75%.

The History of Devil’s Island

Napoleon sent political dissidents to Devil’s Island, (the 239 Republicans who opposed his coup d’état in 1851 were sent there), however, it also became home to vast numbers of hardened criminals from around the French Empire.

The community of murderers, thieves, and rapists would often turn on themselves with prisoner-on-prisoner violence being an everyday factor of Devil’s Island life.

Tropical diseases ran rabid, and those in charge were particularly known for their harshness and brutality.

Few convicts ever escaped as the only way out was via shark-infested waters. Stories of native cannibalism on nearby islands also helped keep prisoners in their place.

The small number of broken survivors that ever made it back to France had such dark tales, they were said to scare other criminals to go straight.

The main part of the colony was a labor camp and the rules for prisoners were incredibly strict. Talking, smoking, and sitting was forbidden as they worked long hours in intense heat. Repercussions were severe.

At night prisoners were detained in dark cells with grid roofs. A raised footbridge above would allow guards to walk across the cells keeping an eye on the inmates at all times.

The conditions were horrific and, of course, unsanitary. One in three inmates died of disease or hunger. Many others died due to near-constant violence, either at the hands of fellow inmates or the guards.

The harsh reality of Devil’s Island first became publicized during the Dreyfus affair. French army captain Alfred Dreyfus was convicted of treason in 1894. He was sent to the penal colony but was later released due to the unjust verdict.

He was very vocal about his experiences and this brought about the gradual change and eventual closure of the penal colony. The imprisonment system on Devil’s Island ended in 1938.

However, the penal colony at Saint Joseph island was not closed until after World War II. It wasn’t until 1953 that the last of the inmates were moved from the area and the prison complex abandoned for good.

Where is Devil’s Island

After the closure of the colony, a few attempts were made to transform it into something more positive. For a short while it was a summer camp, then a police station as well as a plant oil factory. A shark fishing business even had tenure for a while.

After these initiatives failed, the buildings were abandoned and left for nature to take hold.

For many years, this was the situation. However, as tourists began to take interest in the dark history of Devil’s Island, a business opportunity was seen.

Today, some of the colonial structures on the surrounding islands of St-Joseph and Île Royale have been restored.

Devils Island itself remains off-limits. However, most tours to the archipelago will circumnavigate the island offering tourists a close-up view. During this, you will be able to see the old stone cabin where Alfred Dreyfus spent time in solitary confinement. 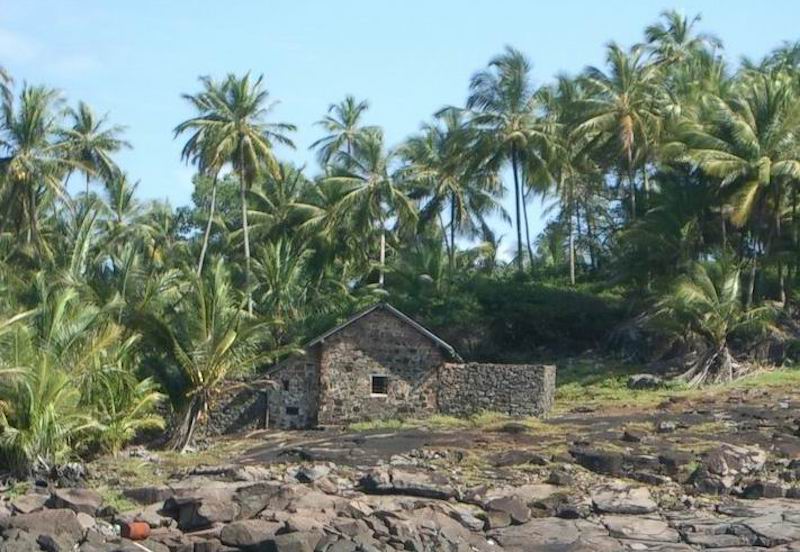 The largest of the three islands, Île Royale, is where you can book overnight accommodation. This is recommended as there is a lot to visit for the average dark tourist.

The Auberge’s open-air restaurant is a good place to head to as it offers great views of Devil’s Island. You’ll see the remnants of many of the containment buildings jutting out of the undergrowth.

You should also head to the shore near here and find an old stone post. A ropeway was once attached to this which connected Île Royale to Devil’s Island.

While the rope-bridge is gone, there’s a photo opportunity in the series of warning signs making it known that the island is strictly out of bounds.

A short walk from the restaurant is the former reservoir that used to provide the island with water. Near here you will find a compound of former warders’ cottages. (Today these can be rented for self-catering holidays.)

To the south of the cottages is a large abandoned building that used to be the prison hospital. You will also find the remains of the island’s lighthouse and church close by.

The old cell blocks on Île Royale can be found towards the north-west of the island.

Most are now completely derelict, however, a walk around them is a must. The atmosphere is definitely foreboding. In one building you can see the metal bars that inmates were shackled to.

There is also a small museum on Île Royale. This provides a rather scant history of the islands and the penal colony but it is worth seeing all the same.

There are reproductions of historic documents, photos, and explanatory texts with English translations.