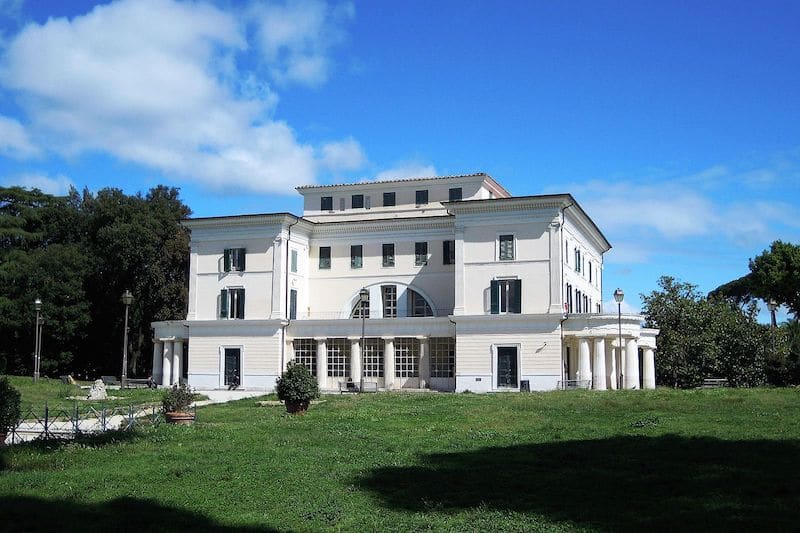 Villa Torlonia in Rome is a grand 19th-century villa that was once the home of Benito Mussolini.

And as any dark tourist will admit, visiting the residences of former dictators is definitely intriguing. Lucky for us, it is now open to the public.

Giovanni Torlonia had a pivotal role in creating the villa that we see today. The family had made a small fortune supplying the Papal armies during the French occupation.

This comfortable position meant that they were able to offer loans to cash-strapped Italian aristocrats.

However, Giovanni Torlonia was a banker and proved particularly astute. He would force the elite to use their properties as collateral.

The family ended up with an entire portfolio of grand residences this way, including ‘la vigna Colonna’. The aristocrats just couldn’t pay back the loans.

Now under the ownership of Giovanni, Villa Torlonia became their primary Rome residence.

Renovations were soon underway with leading architects of the day. A retinue of artists was also hired to transform the interiors. Work was commissioned from Rinaldo Rinaldi and Danish sculptor Thorvaldsen.

It was all very ostentatious. For instance, the “Egyptian Room” contained a Trompe D’oeil basalt and golden hieroglyphs with Antony and Cleopatra as the centerpiece.

There is also a grand ballroom with motifs of gods and demi-gods across the wall and ceiling.

It is no small wonder that a villa with such over the top aesthetic would later appeal to Mussolini.

Mussolini lived at Villa Torlonia between 1925 and 1943. He paid just 1 Lira per year for rent, (although the fact he merely rented and did not claim the property for himself is a surprise).

Very few changes were made to the property aboveground while he was there. This makes it even easier to imagine the tyrant dining amidst the palatial surroundings as he planned his Fascist conquest of Europe.

Underground, meanwhile, extra additions were built. In preparation for war, an air-raid shelter was in the garden of the villa.

As Europe began to tear itself apart, a larger airtight bunker was constructed under the villa itself.

This was easier for Mussolini to safely enter, and could also resist allied aerial bombardment and chemical warfare.

After Mussolini was forced to flee Rome, the villa was occupied by the Allied High Command. It was used in this way until 1947.

Villa Torlonia after the War

Post-war Italy was not kind to Villa Torlonia. With the allies gone and no one stepping in to take care of the property, it fell into disrepair.

Finally, in 1977, the Villa was bought by the Municipality of Rome. It was later opened to the public, with much of the site in a lackluster condition.

Restoration work on this fine palatial residence did not take place until the 1990s.

Where is the Villa Torlonia Museum

The museum contains an interesting collection of valuable artifacts that once decorated the villa and belonged to the Torlonia family.

Because of their vast wealth, Giovanni and Alessandro Torlonia were leading art collectors of the day. This included paintings, sculptures, and other works.

There are also examples of statuary from the Torlonia collection. These once stood in the villa as well as the gardens.

The villa also contains many pieces of 18th and 19th-century furniture, most of which would have been used by Mussolini when he lived there.

The Torlonia collection also includes exhibits from other properties belonging to the family.

Look out for the plaster reliefs by Antonio Canova, several pieces of classic furniture, and a rather interesting marble pediment that used to belong to a tomb on the Appian Way.

The reconstructed Bedchamber of Giovanni Torlonia (1872–1938) is another must-see exhibit. This room also contains furniture that Benito Mussolini would have used during his time at the villa.