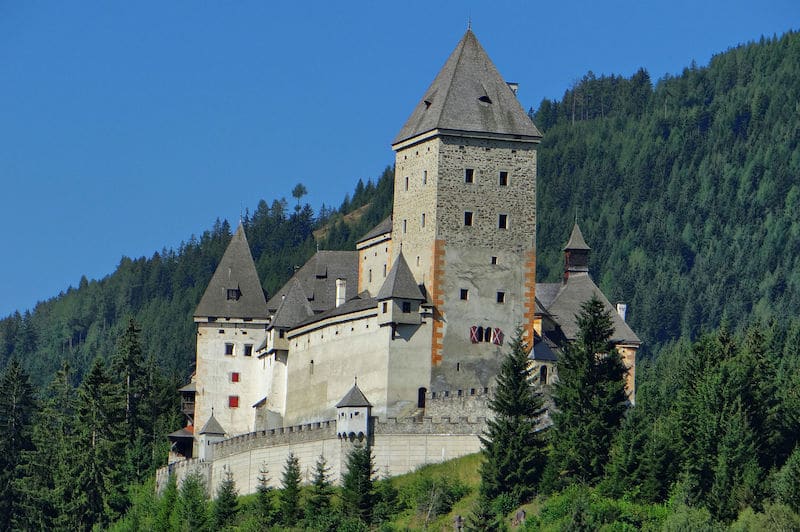 Moosham Castle in Unternberg, Austria, is considered one of the world’s most haunted castles. It is certainly closely linked with the macabre.

Not only was Moosham the administrative center of the Zaubererjackl witch trials, (commonly thought of as the bloodiest in Austria), it was also the site for werewolf hunts in the 1800s.

All of this makes for a sinister destination to check out if you are a dark tourist fan.

Moosham Castle is believed to have been built on the foundations of a Roman castrum fortress. Unfortunately, no traces of the earlier structure remain.

However, we do know that the construction of the castle began soon after 1191, as this is the date of the original deed.

Then there’s a gap in the records of close to a hundred years, the next mention being the seizing of the property by the Prince-Archbishops of Salzburg in 1285.

In the 14th century onwards the castle was the residence of an episcopal burgrave.

Things got interesting in the late 15th century with the arrival of Prince-Archbishop Leonhard von Keutschach. He took over the castle in 1495 and began a large rebuilding and extension project. Much of what is visible today is the product of those works.

In 1520, Moosham became an administrative seat of the Lungau region. It was during this time that the castle was besieged due to the German Peasants’ War.

However, this was not the first time the castle had faced adversity and bloodletting.

As with much of Europe at the time, there were numerous wars and conflicts that had an impact on the area.

From the passing Crusaders to the multiple Austrian-Hungarian Wars, the Flemish Revolt, even the Italian Wars, Moosham did not live through these unscathed.

Add these to local battles and the arrival of the witch trials and you begin to appreciate the amount of death Moosham has witnessed over the centuries. 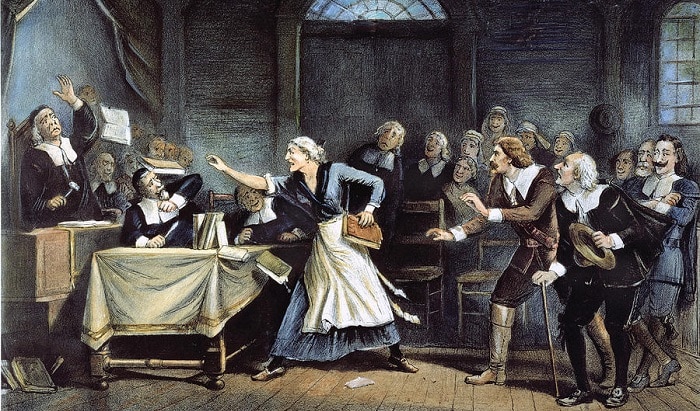 Moosham castle took center stage during the Salzburg witch trials between 1675 and 1690. As the administrative center both trial, sentencing and execution were held there.

139 people were killed in total. Horrifically, 39 children between the ages of 10 and 14 were accused and executed for witchcraft. 53 teenagers also met a bloody end.

Unusually a large portion was male (113). All except two individuals to be murdered were beggars.

The records named every single victim. The youngest, a boy named Hannerl, had just turned 10. The eldest, a Margarethe Reinberg, was 80 years old.

The method of execution was brutal, even for the time. The sadistic authorities preferred a process of slow torture.

Only when an individual was close to death would they be offered the small mercy of hanging or decapitation.

They made an example of the children by chopping their hands off and marking their chests with a burning iron. They were then kept alive and paraded in front of the locals as a warning.

The fact that the victims were almost universally homeless cannot be ignored. There was mass hysteria due to plague, disease, the spread of famine, and general post-war poverty and hygiene.

These unfortunate souls were seen as carriers of all that was bad and ungodly. They had no one to vouch for them. To accuse them of sorcery was a quick and easy way to get rid of them.

After the witch trials, Moosham reverted back to business as normal. However, by the late 18th Century the castle experienced another troubled period.

Archbishop Count Hieronymus von Colloredo dissolved the Moosham bailiwick in 1790, and without funding from the church, the building fell into a state of disrepair.

Not long after that, there were reports of deer and cattle and being found dead in the castle grounds.

The bloodthirsty locals immediately jumped to the “logical” conclusion that werewolves were at the castle.

The then residents of Moosham were rounded up and duly murdered for their nocturnal predilections.

For several decades afterward, Moosham remained abandoned. It wasn’t until 1886 when Austrian explorer and patron of the arts Count Johann Nepomuk Wilczek purchased and moved into the property that life once again graced its walls.

He began a long process of restoration and it remains in the family to this day.

The castle is open every day except Mondays and public holidays.

Though Moosham is privately owned, it is open to the public. There are rooms featuring Wilczek’s extensive art collection, and accommodation can be booked there.

This is especially popular for believers of the supernatural looking out for the castle’s many ghosts.

It is rumored that the screams of witch trial victims can be heard at night. Werewolves apparently still prowl the grounds.

For those of us that take such tales with a pinch of salt, a day trip to see the castle and enjoy the museum is definitely recommended.

The latter focuses on the way people lived throughout the life of the castle, (both residents and the local population).

There is a large collection of sculptures, paintings, corrals, and hunting weapons. There’s also artifacts from the witch trials such as the executioner’s sword, and a replica torture chamber.

Also of note is the Polar Expedition exhibit. Wilczek was the main sponsor of the Austro-Hungarian North-Pole Expedition in 1872–74, and the castle contains interesting artifacts related to it.

Guided tours are offered year-round (except for November to mid-December) and are well worth paying for.