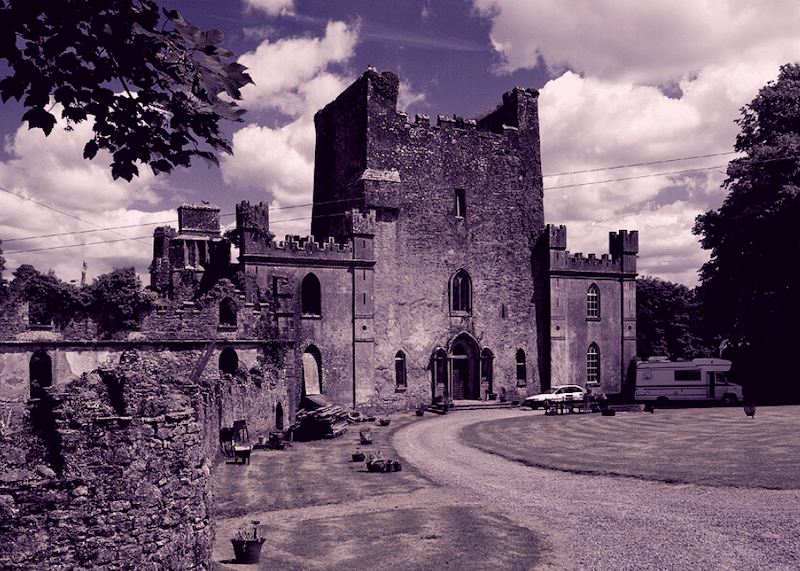 Whether you believe in ghosts or not, the long and bloody history of Leap Castle, County Offaly, Ireland will intrigue any dark tourist.

A lot has gone on between its walls over the last 8 centuries and given that the current owner claims it to be “the world’s most haunted” castle, it gives you an indication of its tumultuous past.

From warring clans to illicit love affairs, children lost and revenge sought; pain and bloodshed have long been the narrative of Leap Castle.

The History of Leap Castle

Despite varying accounts of when the main tower of Leap Castle was constructed, historians place the year to be around 1250 CE.

However, it is also believed that the land the castle was built on was ceremonial in nature. There is evidence of an ancient stone structure at the site and the area could have been occupied consistently since Neolithic times.

As we shall see, this long history plays into the occultist, supernatural beliefs that have been associated with Leap.

During the life of the castle, only a handful of families have lived there.

First were the O’Bannon clan. Back then the castle was known as “Léim Uí Bhanáin” (due to the fertile land that surrounded the castle and was cultivated by the Bannon clan). This is translated as “Leap of the O’Bannons”.

In 1513 and again in 1516, the Earl of Kildare, Gerald FitzGerald, tried to seize the castle. He was unsuccessful each time, but the fighting had taken its toll on the property and it was now partially demolished.

However, the O’Carrolls clan had control of the wider area, so the possession of the Castle in its dilapidated state was handed over to them.

Following the death of Mulrooney O’Carroll in 1532, the clan began to implode from the inside. The family just did not get on.

A leadership battle was at the heart of it all, of course. Sibling brothers turned into enemies, a situation that turned into murder.

One of the O’Carrolls was a priest. While performing a mass inside the castle chapel, his brother stormed in and fatally wounded him with a sword.

In an almost Shakespearean demise, the slain priest fell across the altar and gasped his last as the family looked on.

By 1659 the warring O’Carrolls were long dead and the castle passed by marriage into the ownership of the Darby family.

It remained in the family for several hundred years, gaining further notoriety in the 19th century due to the wife of Jonathan Charles Darby.

Mildren Darby was a famous author of Gothic novels. She and her husband would hold séances at Leap Castle, inviting the who’s who of Irish society of the day. This raised the profile of the castle and its ghosts.

By the time of the Irish Civil War the fortunes of Leap and the Darby’s had changed considerably. Rents had been raised and a lot of the land sold in order to pay for renovations and extensions.

It is suspected that the blaze that occurred at Leap in 1922 was intentional. The owners may well have torched the place in order to receive the insurance.

For over 50 years Leap Castle was abandoned and unlivable. Salvation came in the form of Australian historian Peter Bartlett. He bought the ruined castle in 1974 and began a slow renovation to portions of the building until his death in 1989.

That restoration work continues to this day. The current owners, musician Seán Ryan and his wife Anne bought Leap Castle in 1991 and are painstakingly attempting to return it to its former glory.

A rather macabre discovery at the castle came during the 1900s. While works were carried out, builders found an oubliette behind a wall in the chapel.

At the bottom was a series of sharp wooden spikes surrounded by human skeletons.

It is believed that the Oubliette was built sometime during the O’Carrolls tenure at Leap. They would drop guests through the trapdoor in order to impale them on the spikes 8 feet below.

However, the Darbys must have known about it too. A pocket watch found when the bones were being cleared was dated from the mid-1800s.

The deadly trapdoor and pit have since been covered up.

We’ve already mentioned the Bloody Chapel. This is where an O’Carroll killed his priest brother over the altar.

The now burnt-out shell of the chapel is eerie enough to visit in daylight. However, generations of people living either at the castle or nearby have reported seeing light streaming from the barren chapel windows at night, and a spirit of the murdered priest standing in the doorway.

The Priest’s House is still derelict after the 1922 fire. However, supernatural activity has long been attached to this part of the grounds.

Mildred Darby reported that guests were spooked by the place, stating that:

“There is something heavy that lies on people’s beds, and snores and they feel the weight of a great body pressing against them, in a room in the Priest’s House.”

She also described one apparition as:

“A monk, with a tonsure and cowl, walks in at one window and out another, in the Priest’s House.”

The notion of child ghosts always makes the hair stand on end.

At Leap it is said that two little girls can be spotted playing in the Main Hall. The backstory suggests that the children lived on the estate during the 1600s.

Emily O’Carroll died after falling from the castle’s battlements. What happened to Charlotte is unknown, however, her ghost drags a deformed leg behind her as she plays.

Seen less frequently, yet believed to be associated with Emily and Charlotte is a ghost known as the governess.

She looks like a Nanny and sightings of her when they happen, occurs alongside those of the young girls.

Another ghost from the O’Carroll era is that of the murdered woman. She appears only briefly, her clothing is ripped and she screams twice before vanishing.

The date of her death is believed to be sometime in the 1500s.

There is very little context to this one. On several occasions, an old man has been spotted sitting comfortably in an armchair in front of the Main Hall fireplace.

The Red Lady is a ghost that has been spotted for centuries. She is a beautiful brunette that is said to wear a long red dress as she roams the corridors. She clasps a raised dagger in her hand.

The story behind this one is again attributed to the murderous O’Carroll clan. The woman is said to have been captured, was raped, and fell pregnant.

When the baby was born, the O’Carroll’s killed it immediately. In despair, the Red Lady grabbed the knife and took her own life.

The Elemental goes much further back than even the castle walls.

It is believed that this nightmarish apparition dates back to the time of the Druids, (remember, the site is said to have ceremonial links reaching into the Iron Age). Sorcery would have been used on the sacred land that may have unleashed the Elemental.

Descriptive sightings are thin on the ground, however, the spirit is extremely sinister and should be avoided at all costs.

Where is Leap Castle

Although in private ownership, the current owners Seán Ryan and his wife Anne, do allow for tours.

You need to organize these directly with Seán (either phone call or email, listed above) and he is generally happy to share his deep knowledge of Leap Castle and the many ghosts associated with it.

The renovation works are ongoing so a lot of the castle still remains out of bounds.

To help cover the costs of the rebuild and general upkeep, a 6 euro donation is requested from those that make the visit.