During my travels of Vietnam, the Cu Chi tunnels were one location I knew I couldn’t miss.

My knowledge of the Vietnam war did not stretch much further than what I had learned watching movies such as Full Metal Jacket and Platoon. However, even with such limited education, I was still very much aware of the tunnels that the Viet Cong used with such deadly effectiveness during the conflict.

A little preliminary study (courtesy of Wikipedia and this excellent documentary told from the perspective of the Vietnamese), informed me that the tunnels were actually hand-carved during the French occupation of Vietnam in the 1940s.

The extensive network was further expanded during the war with America in the 1960s and 70s. This stretched across the entire country, amounting to several thousands of miles of interconnected tunnels.

The system proved invaluable to the success of the Vietnamese during the conflict. It enabled them to house troops, transport essential supplies, food, and weapons. They were also used to snare the Americans, booby-traps and surprise attacks could all be strategically employed using the tunnels.

The Cu Chi district northwest of Ho Chi Minh City is the only portion that remains wholly open to the public today.

They form part of the itinerary for many visitors to Ho Chi Minh City. To the dark tourist, they are an essential must-see.

What I didn’t realize before arriving in the city, however, is that there are in fact two locations where you can visit the tunnels. The popular starting point at Ben Dinh and the lesser-known area of Ben Duoc.

So which of the two tunnel sites should you visit? Here at Dark Tourists we always want to deliver the best, most informed opinion.

Another point is that we’re generally up for a bit of adventure. In this case, we would advise going off the beaten track. The majority of the guided tours and Cu Chi tunnel visit packages will take you to Ben Dinh.

It is the site closest to Ho Chi Minh City and it is undoubtedly easier to get to. However, because of this it is often hideously packed with tourists.

In fact, there is a somewhat dark Disneyfication to the whole enterprise at Ben Dinh. There’s gift shops, a shooting range, and the tunnels have been overly sanitized (reconstructed and expanded to make them more comfortable for tourists of varying size and volume).

That’s not what I am after when I visit a dark tourist site.

The Ben Duoc site is my recommended option by far. Yes, it is further away from Ho Chi Minh City, however, there’s still a good amount of reliable ways to get there.

And once you do, there are far fewer tourists.

Essentially, a visit to the tunnels at Ben Duoc provides are much more authentic experience. The original tunnel system is better preserved here, and crawling through the narrow dark network is not for the faint-hearted (or claustrophobic).

On my visit, it was just my brother, a close friend and myself. I think we only saw three or four other tour groups that entire day.

We were allowed into certain sections without being accompanied by our guide, and it was not hard to imagine what it must have been like to be down there in times of conflict.

Whether you decide to visit the Ben Dinh or Ben Duoc site, there are a lot of options on how to get there.

The transport infrastructure in and around Ho Chi Minh City is good. This means it is possible (with a little research) to use public transport for just a few dollars. There are direct buses to the Ben Dinh site, however, you’ll be forced to make connections to reach Ben Duoc.

There’s also the option of using an organized tour. It is impossible to miss these. Wherever you have booked accommodation there will be flyers about the tours available. There’s a massive range covering all budgets and preferences. (See below for some of my recommended picks).

Get there by speed boat! 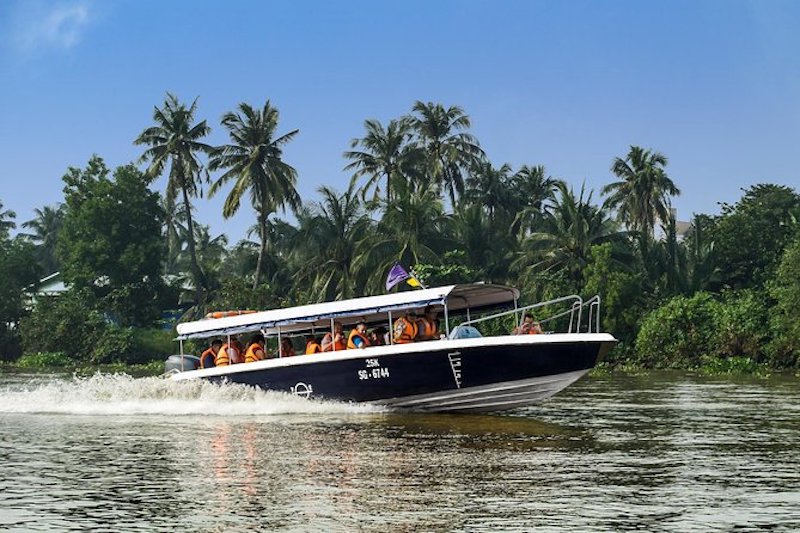 You can also opt to travel to the sites by boat. I cannot recommend this enough. It will mean that a visit to the tunnels is a full-day affair, however, the time you spend getting there is not wasted as you traverse the waterways out of Ho Chi Minh City and on towards Ben Duoc.

The speed-boat journey ended up being one of my highlights in Vietnam in fact.

However, I found our speedboat trip via a contact at the hotel we were staying at. Try as I might, I can not find the details of the guys we used online. However, although I haven’t used them personally, Saigon Boat Company, Saigon River Tour, and LesRives are the main operators offering Cu Chi visits by boat. 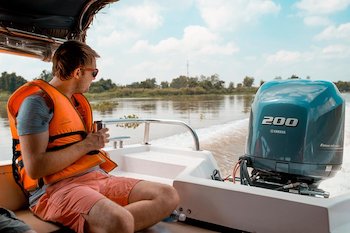 One of the best-organized speed boat trips to Cu Chi Tunnels from Ho Chi Minh City is this one. They offer morning or afternoon tours and a guide is provided throughout.

Details about the war and the building of the tunnels are given from a Vietnamese perspective. You also travel in relatively small groups limited to 14 people.

The tour also includes breakfast and/or lunch (depending on your departure time). A close friend opted for this tour after I recommeneded going by speedboat and she raved about it.

Guided Tours at the site

If you decide not to go for an all-inclusive package tour (transportation and guide at the site type deal) I do advise that you book a guide for when you are at the site.

We had to do this as our speedboat transport did not include a tunnel guide. Again, there’s a ton of options available and you can book one on arrival at the tunnels too.

It is important as the labeling of artifacts within the tunnels is lackluster at best, especially as we were visiting the lesser-used Ben Douc tunnels.

Our guide provided the information we needed to enrich the experience. And as with any dark tourism site, I urge you to read up on the tunnels as much as you can before you go.

It was an incredible achievement by the Vietnamese to build this system; it is difficult to see how they would have survived the war without them. 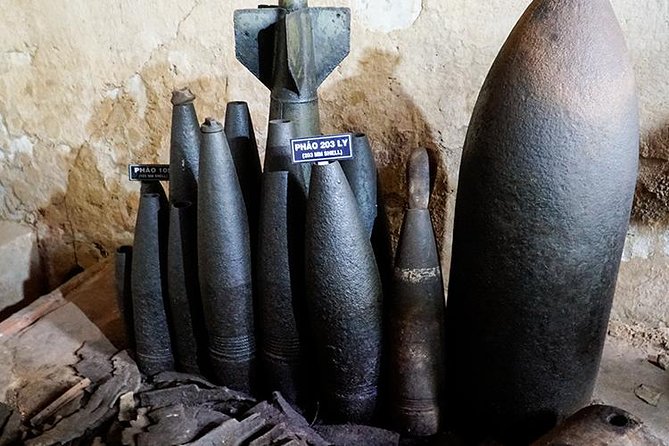 The current top-rated Viator guided tour of the Cu Chi tunnels (complete with pick up and drop off to Ho Chi Minh city), is this excellent offering.

Including journey time, the whole tour takes about 6 hours. The English speaking tour guides are extremely knowledgable and you really do get to crawl through sinister parts of the tunnel network and explore some of the more out of the way areas. Even better is the fact they offer tours to Ben Douc too.