The collapse of communism and the fall of the Soviet Union suddenly made a lot of public works obsolete.

In fact, many of the statues that graced the cities and towns behind the Iron Curtain were downright offensive after the various communist regimes had their final hurrah. They only served to remind the public of the tyranny experienced.

However, four years after the collapse of communism in Hungary, the city of Budapest decided to save the statues that had been rounded up rather than destroy them.

Memento Park, situated just 20 minutes from the city center, is an open-air museum of these former public works of art. Over 40 Communist-era statues have been placed there.

Neither glorified nor vilified within this setting, they serve as a reminder of the aesthetic and political statements of the time.

The Origins of Memento Park 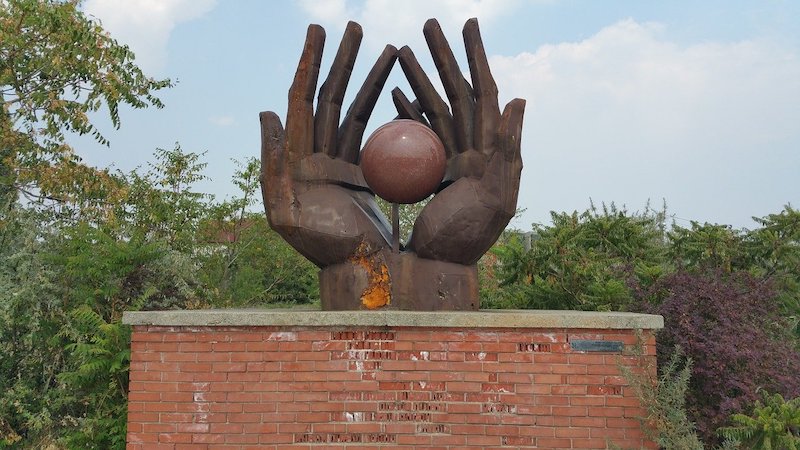 In 1991, the Budapest General Assembly (Fővárosi Közgyűlés) announced a competition requesting ideas on what to do with all the communist public statues that had been removed from the streets of Hungary.

Hungarian architect Ákos Eleőd won. His design of a park on the edge of Budapest filled with these statues captured the imagination of the officials.

Two years in the making, Memento Park celebrated its grand opening as a public outdoor museum on June 29, 1993.

The date was a special one as it fell on the second anniversary of the withdrawal of the Soviet troops from Hungary.

On the opening of the site, Eleőd said:

For the last 27 years, the park has been a popular place to visit for both foreign tourists observing the art of a troubling period of history, and locals remembering the past.

Where is Memento Park?

Local bus 150 in the direction of Campona will take you to Memento Park. Popular boarding points include Kelenföld train station (Metro Line 4) or Újbuda-központ.

Direct bus services from Deák Ferenc Square also travel to the park. These start at 11 a.m. every day and shuttles passengers to the front gates. (Due to the Coronavirus the direct bus is not operating at this time.)

Memento Park is open from 10 a.m to dusk all year round.

Check out Airbnb’s in Budapest

Over the years (as more foreign tourists have flocked to Budapest) the neutral setting of Memento Park has been replaced with a more disneyfied version.

The theme is apparent before you’ve even stepped inside the park.

The entrance is a red brick construction that could be described as a social realist homage to a Greek temple. Proletariat anthems blast out from speakers where you purchase your ticket.

Capitalism meets communism in a fascinating juxtaposition (if you stop to think about it), with the array of communist-era memorabilia forcibly on sale as you enter. You can even buy a CD compilation of the anthems that greet you.

A nice touch when my wife and I visited was the old Trabant parked inside the main gate. The car was synonymous with the Eastern Block and was known affectionately as a “spark plug with a roof” because of its small size.

The Trabant was the only car the average Hungarian could hope to afford prior to 1990 and in the form that we found at the park, had been repurposed as an interactive art installation.

The theme park vibe continued with the addition of a phone box beside the car. Here you can listen to the voices of some of communism’s greatest dictators: Joseph Stalin, Mao Zedong, Che Guevara, and lesser-known individuals from the Hungarian Communist Party.

From here you can make your way into the main park setting and start looking for the 40+ statues that have been relocated there.

The range is intriguing. The usual suspects are all present and correct, with Lenin captured mid-speech and a detailed bust of Stalin.

Hungarian communist leaders and party members are featured, however, for foreign tourists, you will need to use the guide to ascertain who is who, and who did what.

Then there the more allegorical monuments, with names like: “Hungarian-Soviet Friendship” and “Liberation”. A large pair of hands holding a globe-like object, or the hammer and sickle motif fall into this category.

There are also a gigantic pair of boots above a red brick grandstand. This, it turns out, is to represent the eight-meter-high bronze statue of Stalin that was destroyed during the Hungarian Revolution on October 23, 1956.

All that is left of the statue after it was torn from the “Felvonulási tér” in central Budapest, was the boots, (the boots in Memento Park are a replica of the remains).

The grandstand is open to the public, and inside you will find smaller statues and busts that didn’t make it as displays within the park.

An exhibition on the fall of the communist regime can also be seen inside the buildings that flank the boot monument. These simple timber structures have been designed to evoke the image of internment camp buildings.

Here, footage of Hungary’s Secret Police in training can be viewed (among other communist government-funded productions). These short films provide a fascinating insight into the covert world that was rife within any communist regime.

In attempts to maintain the status quo, the authorities spied on their own citizens with ruthless efficiency. One of the videos shows the best way to install a secret camera in your handbag.

If you are a dark tourist that happens to be in Budapest, it is well worth the short trip and entrance fee to check out.

Hello, I am from the PR and Communications of Memento Park. First of all thank you for mentioning us on your website. I would like to amend a detail in your article. You say that Memento Park, due to the flock of foreign tourists to Budapest, has been replaced with a more disneyfied setting. Let me add a little clarification here. Memento Park, as you mention in the first section of your article, follows conceptual plans. These plans were partially completed at the time of inauguration in 1993. Having been operated ever since without a single state support we were… Read more »

Hi Judit, many thanks for the valuable feedback, and the additional information about Memento Park. We have updated the article with the relevant changes due to Covid-19.

Thanks for stopping by and leaving your thoughts…

This website uses cookies to improve your experience while you navigate through the website. Out of these cookies, the cookies that are categorized as necessary are stored on your browser as they are essential for the working of basic functionalities of the website. We also use third-party cookies that help us analyze and understand how you use this website. These cookies will be stored in your browser only with your consent. You also have the option to opt-out of these cookies. But opting out of some of these cookies may have an effect on your browsing experience.
Necessary Always Enabled
Necessary cookies are absolutely essential for the website to function properly. This category only includes cookies that ensures basic functionalities and security features of the website. These cookies do not store any personal information.
Non-necessary
Any cookies that may not be particularly necessary for the website to function and is used specifically to collect user personal data via analytics, ads, other embedded contents are termed as non-necessary cookies. It is mandatory to procure user consent prior to running these cookies on your website.
SAVE & ACCEPT
wpDiscuz
2
0
Would love your thoughts, please comment.x
()
x
| Reply