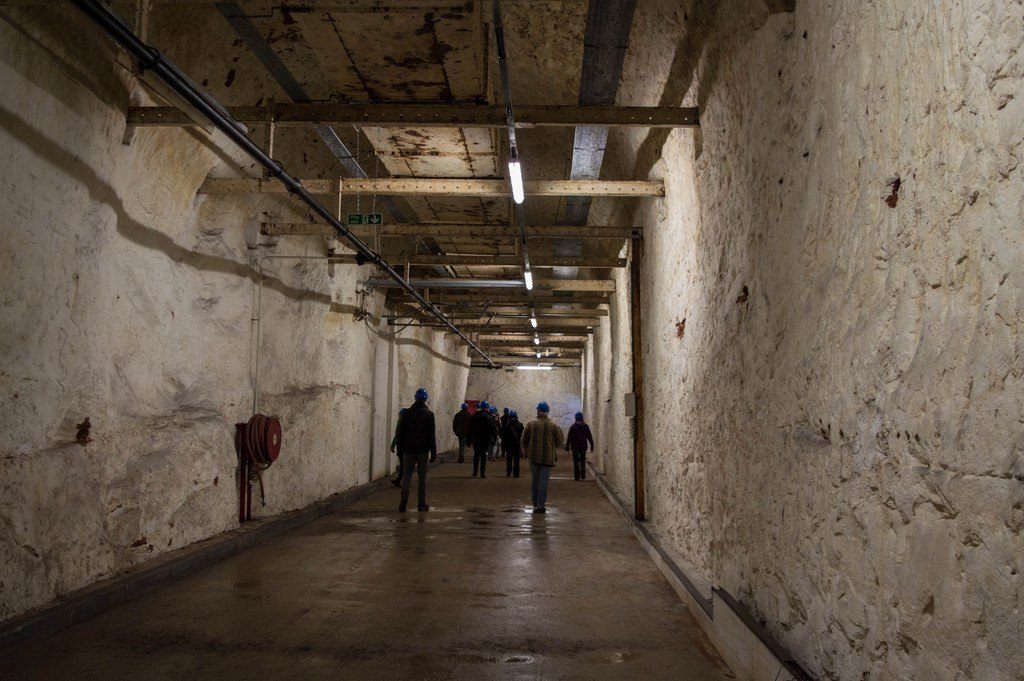 The largest underground complex of tunnels in the UK is actually open to the public.

If you happen to be anywhere near Kidderminster in Worcestershire, England, this is an essential dark tourist site to check out.

Mind you, you will need to book ahead as admission is by arranged, guided tour only, (more on that below).

Short History of the Drakelow Tunnels

The tunnels were first dug between 1941 and 1942 to house a “shadow factory” for the Rover car company.

Shadow factories was a British concept that took hold in the 1930s. The idea was to mix knowledge and machinery between industries so that each would mutually benefit. (Essentially, experts would “shadow” each other.)

In the case of the Drakelow Tunnels, auto and aeronautical companies worked together.

The tunnels proved very useful during WW2 as they immediately lent themselves to the production of aircraft and tank engines.

As the long frost of the Cold War set in, the Drakelow Tunnels took on yet another purpose. In 1961 the British Government started converting the complex into a top-secret facility named Regional Seat of Government 9 (R.S.G. 9).

This gradually developed into an “End of the world” nuclear bunker so that the UK could be managed from below in the event of nuclear war.

By 1980 the complex was re-designated (R.G.H.Q. 9.2) and had been upgraded with blast doors and airlocks to withstand armageddon.

All of this was unknown to the public of course; a state of affairs that lasted until 1993.

With the government out by the mid-nineties, the tunnels and all of the remaining (somewhat obsolete) equipment went into private ownership.

In more recent years, however, the Drakelow Tunnels Preservation Trust has been working tirelessly to restore the complex and transform it into a fascinating Cold War Museum.

Where are the Drakelow Tunnels?

Turning the complex into a family-friendly museum has proved to be a slow process. Some sections are open to visitors, however, as already mentioned these can only be conducted via organized tours that occur on set dates.

To find out when these are you need to visit the Save Drakelow Facebook page. Here, you will be given information on upcoming tours and whether spaces are available.

They have a strict 180 person limit and due to the sporadic nature of the open days, these sell out fast. (You will also be allocated a time, as the 180 people are split into tour groups throughout the day).

Payment is by cash on the day and they ask that you bring the correct amount if possible. Head to the website to find out more.

What to expect on the tour

The tour will take you to the remaining sections of the Rover Shadow Factory, as well as both the RSG and RGHQ Nuclear Bunkers.

Highlights include the BBC studio where the government would have broadcast to survivors of the nuclear attack. You’ll also be led around the dormitories and decontamination block.

Equipment in the emergency generator room still remains, as well as the dated technology of the GPO telephone exchange.

The tour lasts between 45 minutes to 1.5hrs depending on the number of questions asked, which they whole-heartedly encourage.

Photography is allowed in all sections of the complex.

Some areas of the tunnels have limited lighting so a good torch is recommended. You should also bring your own food as there are no provisions for refreshments

Finally, it can get awfully chilly down there, even in summer. So bring a jumper or a coat.

Note: The Engish Heritage sells tickets on their website for 30 quid a pop and should be avoided. Quite what they are playing at with that I do not know.

A Trip Inside the Drakelow Tunnels (1992)

The following video provides a very interesting insight into what the Drakelow Tunnels actually looked like before it was completely decommissioned and much of the original equipment sold off.

This home video was filmed in 1992 (so forgive the quality). It was shot whilst the MOD still owned the complex.