The demilitarized zone (DMZ) separating North and South Korea needs no introduction to the average dark tourist. It is one for the sinister travel bucket list.

This 160-mile-long (257 km), 2.5-mile-wide (4 km) strip of land between the two Koreas, is one of the most heavily guarded borders on the planet. Over two million soldiers patrol the area.

Much like the Cold War demarcation zone on the eastern side of the Berlin Wall, attempts to cross the border using improper methods will result in being shot. No questions asked.

In fact, tensions are so jittery at the DMZ a wrong move by either party could lead to an all-out war.

As Kim Jong Un has boasted, the North has the ability to obliterate the South Korean capital, Seoul, (it lies just 56km from the DMZ border) with a touch of a button. It is well within the range of the tyrant’s missiles.

However, for now, the stalemate continues. The 1953 ceasefire that ended the Korean War, (well paused it actually, no peace treaty was ever signed, meaning the two Koreas are technically still at war), has seen little in the way of change over the intervening 67 years.

The divided country made up of the same people remains just as hostile towards one another, as it has since the end of the second world war.

The Third Tunnel of Aggression

Neither side has rested on its laurels mind you.

North Korea has one of the largest manned armies in the world. While the south’s military ambitions are smaller, it has technology on its side as well as the support of the mighty US Army.

This hasn’t stopped the various ruling Kims from pursuing more guerrilla based tactics over the years, however.

South Korea first discovered the Third Tunnel of Aggression in 1978; (so-called, because, well it was the 3rd one they found).

The purpose was rather transparent. For a land-based attack, the North Koreans needed to get their army into enemy territory fast and with the element of surprise. The tunnels would have achieved this.

In fact, while only 4 tunnels have been discovered to date, they are rumored to be at least a dozen more beneath the DMZ. Not all have broke ground into South Korea proper, meaning they are difficult to find.

How big is the 3rd Tunnel at the DMZ?

North Korea at first denied digging the tunnel. After the evidence that they did piled up, they then painted the insides black and reported that it was merely a tunnel dug for coal; despite none being found there.

Unable to trust the North Korean officials any further than they could throw them, the South took control of the passage and blocked its point along the 38th parallel (beneath the DMZ) with concrete barriers.

Where is the Third Tunnel of Aggression

Thankfully for us intrepid dark tourists the 3rd tunnel is now open to the public. Tours will take you along the length of the tunnel, allowing you to reach right up to the 3rd border blockade, the edge of the DMZ basically.

The second barricade can be viewed through a small window from the third. Beyond that (and we are only talking about a few feet here), is where North Korea begins.

You can almost hear the footsteps of the machine-gun, wielding guards patrolling the other side.

Your mobile, camera and other belongings will need to be placed in a locker before you enter the tunnel as no photography is allowed. You will also need to wear a hard hat

The first part of the walk is along a steep downhill slope for about 500 meters. Beyond that, things get a bit narrow, so be warned if you’re claustrophobic. And for those above 6′, you’ll be stooping a lot to avoid hitting your head. 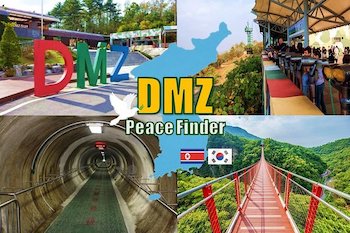 Visiting the DMZ is a once of a lifetime trip for most of us. Because of that, opting for the right tour is essential.

While this is relatively expensive at $200, you will get your own private guide and can avoid the nonsense that comes with group packages.

This personalized experience means you can ask all the questions you want, and you have the undivided attention of your guide. Click for details for what’s included, however in our opinion it is one of the best DMZ tours currently available. 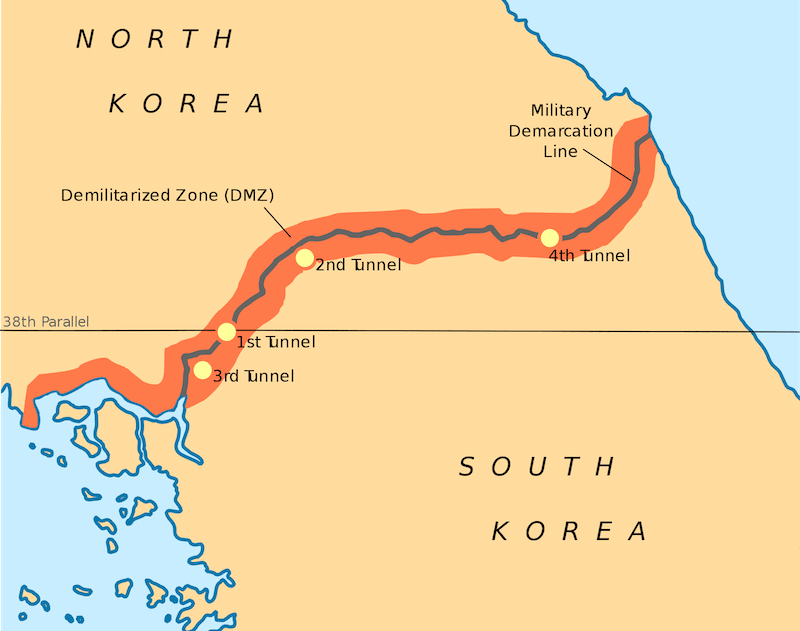 Tunnel Hunters, (enthusiastic members of the public in other words) in South Korea continue to search for secret passageways in and around the DMZ.

Their patriotic zeal is commendable if a little fool-hardy. However, they firmly believe that their liberty and safety are under threat from a North Korean invasion until all the tunnels are found.

Have you been here? Or would you like to visit? What are your thoughts on this place?